Dactylogyrids (Platyhelminthes: Monogenoidea) Infecting the Gill Lamellae of Flatheads (Scorpaeniformes: Platycephalidae), with Proposal of Platycephalotrema n. gen. and Descriptions of New Species from Australia and Japan

Argulus from the Pascagoula River, MS, USA, with an Emphasis on Those of the Threatened Gulf Sturgeon, Acipenser oxyrinchus desotoi

Species of Argulus (Branchiura Thorell, 1864) are common ectoparasites of freshwater, estuarine, and marine fishes. Argulid identification and taxonomy is often confusing because many species are reported to parasitize multiple host species, have similar morphological characters, and come from various salinity regimes. Gulf sturgeon is an anadromous fish natal to drainages in the north-central Gulf of Mexico, and as with many endangered species, has a poorly documented parasite community. During Gulf sturgeon tagging and monitoring studies (2016–2019) in the Pascagoula River, MS, USA, species of Argulus were collected from Gulf sturgeon as well as other incidentally captured fishes. Argulus flavescens Wilson, 1916 was found on Gulf sturgeon and flathead catfish, Argulus americanus Wilson, 1902 on bowfin, and Argulus bicolor Bere, 1936 on Atlantic stingray. We provide morphological details and measurements for these species as well as the first confirmed 28S rDNA molecular data. Argulus flavescens was more abundant and prevalent on larger Gulf sturgeon and on sturgeon captured in freshwater rather than estuarine habitats. Our results indicate that A. flacescens may not tolerate estuarine salinities and that the anadromous life-history pattern of Gulf sturgeon could help rid them of A. flavescens when they emigrate from their riverine habitats. View Full-Text
Keywords: Branchiura; parasites; fish louse; anadromous; diadromous; 28S; bowfin; stingray Branchiura; parasites; fish louse; anadromous; diadromous; 28S; bowfin; stingray
►▼ Show Figures 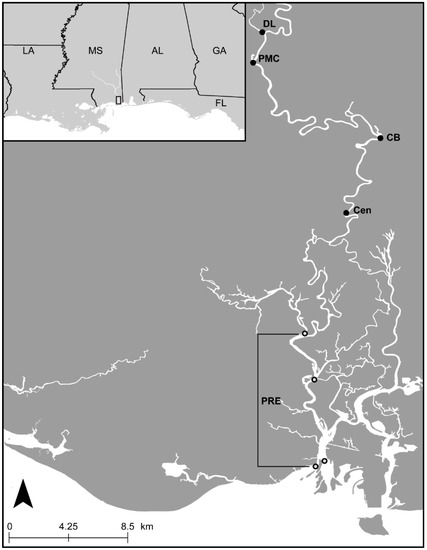