Dysregulated MicroRNAs as Biomarkers or Therapeutic Targets in Cisplatin-Induced Nephrotoxicity: A Systematic Review
Next Article in Special Issue

Toll-like receptors (TLRs) play a major role in the innate immune system. Several studies have shown the regulatory effects of TLR-mediated pathways on immune and inflammatory diseases. Dysregulated functions of TLRs within the endosomal compartment, including TLR7/9 trafficking, may cause systemic lupus erythematosus (SLE). TLR signaling pathways are fine-tuned by Toll/interleukin-1 receptor (TIR) domain-containing adapters, leading to interferon (IFN)-α production. This study describes a TLR inhibitor peptide 1 (TIP1) that primarily suppresses the downstream signaling mediated by TIR domain-containing adapters in an animal model of lupus and patients with SLE. The expression of most downstream proteins of the TLR7/9/myeloid differentiation factor 88 (MyD88)/IFN regulatory factor 7 signaling was downregulated in major tissues such as the kidney, spleen, and lymph nodes of treated mice. Furthermore, the pathological analysis of the kidney tissue confirmed that TIP1 could improve inflammation in MRL/lpr mice. TIP1 treatment downregulated many downstream proteins associated with TLR signaling, such as MyD88, interleukin-1 receptor-associated kinase, tumor necrosis factor receptor-associated factor 6, and IFN-α, in the peripheral blood mononuclear cells of patients with SLE. In conclusion, our data suggest that TIP1 can serve as a potential candidate for the treatment of SLE. View Full-Text
Keywords: lupus erythematosus; systemic; Toll-like receptors; mice; inbred MRL/lpr lupus erythematosus; systemic; Toll-like receptors; mice; inbred MRL/lpr
►▼ Show Figures 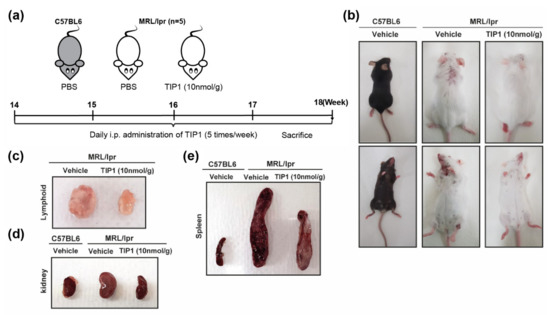