Echiura is one of the most intriguing major subgroups of phylum Annelida because, unlike most other annelids, echiuran adults lack metameric body segmentation. Urechis unicinctus lives in U-shape burrows of soft sediments. Little is known about the molecular mechanisms underlying the development of U. unicinctus. Herein, we overviewed the developmental process from zygote to juvenile U. unicinctus using immunohistochemistry and F-actin staining for the nervous and muscular systems, respectively. Through F-actin staining, we found that muscle fibers began to form in the trochophore phase and that muscles for feeding were produced first. Subsequently, in the segmentation larval stage, the transversal muscle was formed in the shape of a ring in an anterior-to-posterior direction with segment formation, as well as a ventromedian muscle for the formation of a ventral nerve cord. After that, many muscle fibers were produced along the entire body and formed the worm-shaped larva. Finally, we investigated the spatiotemporal expression of Uun_st-mhc, Uun_troponin I, Uun_calponin, and Uun_twist genes found in U. unicinctus. During embryonic development, the striated and smooth muscle genes were co-expressed in the same region. However, the adult body wall muscles showed differential gene expression of each muscle layer. The results of this study will provide the basis for the understanding of muscle differentiation in Echiura. View Full-Text
Keywords: Echiura; Urechis unicinctus; musculature; striated muscle; smooth muscle Echiura; Urechis unicinctus; musculature; striated muscle; smooth muscle
►▼ Show Figures 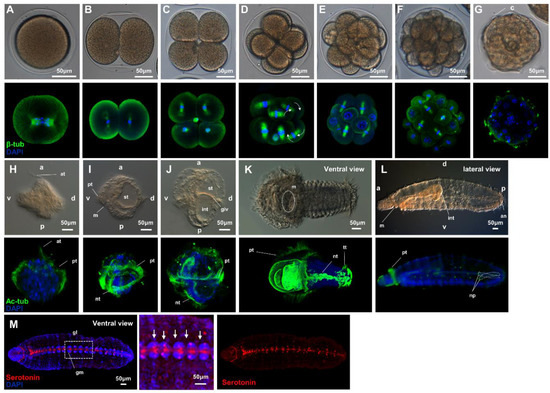