One random copaiba essential oil batch was selected to study its effects on the pI3K/Akt/mTOR signaling pathway, which regulates neuronal cell growth, longevity, and energy metabolism [25,26]. Following the treatment of SH-SY5Y cells with 100 ng/mL copaiba essential oil, total cell extracts were collected at specific time points and then assayed for protein PTM profiles. Specifically, the protein PTM profiles of Akt1, Akt2, Akt3, mTOR and p70S6K were measured with either cIEF or Western immunoassays. Using cIEF immunoassays, a single primary antibody against pan-Akt was sufficient to resolve the distribution of Akt1, Akt2, and Akt3 phosphoisoforms (Figure 2A and Figure S1A,B). Primary antibodies against Akt1, Akt2, or Akt3 were also used, and their phosphoisoform profiles were in agreement with those obtained with the pan-Akt primary antibody (Figure S2A–C). In addition, capillary Western immunoassays were used to measure the expression of mTOR (Ser2448) and p70S6K (Thr389) phosphoisoforms (Figure 2B). Interestingly, the levels of the phosphoisoforms of Akt1, Akt2, Akt3, mTOR, and p70S6K increased and peaked at 30 min after treatment with copaiba essential oil before steadily declining over the next 24 h (Figure 2C). Among the Akt isoforms, copaiba essential oil induced greater effects on the phosphorylation of the Akt1 isoform than on the Akt2 and Akt3 isoforms. Clearly, copaiba essential oil induced time-dependent positive regulation of the pI3K/Akt/mTOR signaling pathway in the SH-SY5Y neuronal cell line.

2.5. Time-Dependent Positive Regulation of the MAPK and JAK/STAT Signaling Pathways

Interestingly, treatment with copaiba essential oil also activated the apoptosis signaling pathway in SH-SY5Y cells. Apoptosis is a programmed sequence of events that lead to cell death. The PTM profiles of the Akt1, BID, caspase 3, and caspase 7 proteins were used to monitor the activity of the apoptosis signaling pathway [31]. Following treatment with 100 ng/mL copaiba essential oil, the expression levels of Akt1, BID, caspase 3 and caspase 7 phosphoisoforms increased significantly, peaked at 30 min, and then declined toward baseline levels at 24 h (Figure 6A–E). Consistently, treatment of SH-SY5Y cells with copaiba essential oil for 24 h reduced the viability of the cells with an EC50 of approximately 400 ng/mL (Figure 6F). The cytotoxic effects of copaiba essential oil are consistent with the reported antiproliferative activities of copaiba oleoresin and its constituents on a broad range of human cancer cell lines [2,8].

The chemical composition of copaiba essential oil was analyzed using a gas chromatograph (Agilent 6890N, Santa Clara, CA, USA) coupled with a mass spectrometer (Agilent 5973 Network). The samples were loaded with an automatic injector (Agilent 7683). Sample preparation consisted of dissolving 0.02 mL of copaiba essential oil in 1.0 mL of hexane. Each sample injection was repeated three times. An Agilent DB-5MS capillary column with a length and diameter of 30 m and 0.25 mm, respectively, was used. The stationary phase film thickness was 0.25 μm. The flow rate of the carrier gas, nitrogen, was 1.2 mL/min. The temperatures of the injector, ion source, and quadrupole were 250 °C, 230 °C, and 150 °C, respectively. Samples of 3 μL were injected in split mode (40:1). The analyses were carried out in scan mode over an m/z range of 40–500. The time of analyte allocation was 52 min. The column temperature program was 40 °C for 3 min followed by 80 °C for 2 min, 120 °C for 5 min, 200 °C for 2 min, and 250 °C for another 2 min. ChemStation software was used to collect and process the data. The compounds in the samples were identified by comparing the mass spectra with standard spectra from the NIST 2014 library. Retention indices were determined. Compounds with mass spectra showing more than 95% conformity with the standard library spectra were considered. To confirm the identification, the retention indices of the analyzed compounds were compared with the literature. The relative content percentages of the analyzed compounds were based on the peak area of the total ionic current of all compounds present in each sample.

Approximately one million SH-SY5Y cells were incubated on ice for 10 min with 60 µL of lysis buffer (cat. no. 040-764, ProteinSimple, Santa Clara, CA, USA), sonicated for 5 s 4 times, mixed by rotation for 2 h at 4 °C, and centrifuged at 12,000 rpm in an Eppendorf 5430R microfuge for 20 min at 4 °C. The supernatant was collected as the cell lysate. The total protein concentration in the cell lysate was determined with a Bradford protein assay and adjusted to a final concentration of 0.3 µg/µL with the separation gradients (cat. no. Premix G2, pH 5–8 or pH 3–10, ProteinSimple) for charge-based cIEF immunoassays or to 0.4 µg/µL with denaturing buffers (cat. no. PS-ST01EZ or PS-ST03EZ, ProteinSimple) for size-based Western immunoassays.

The primary and secondary antibodies and biomarker proteins and their functions are listed in the Tables S1 and S2.

Approximately 400 nanoliters of SH-SY5Y cell lysates in separation gradients were loaded into individual capillaries of the 96-capillary NanoPro 1000 system (ProteinSimple). Isoelectric focusing was performed at 15 mW for 50 min. The proteins were cross-linked to the capillary walls using ultraviolet irradiation for 80 s. Primary and secondary antibodies were sequentially introduced with incubation times of 120 and 60 min, respectively. Following incubation with chemiluminescence detection agents, the proteins were detected with an average exposure time of 240 s. Hsp70 was used as a loading control. All cIEF immunoassays were performed in triplicate for each protein, and duplicate experiments were performed per treatment condition, producing six repeated measurements per protein.

Cell lysates in denaturing buffers were denatured at 95 °C for 5 min, and then transferred to assay plates (cat. no. SM-W004 or SM-W008, ProteinSimple) preloaded with blocking reagents, wash buffer, primary and secondary antibodies, and chemiluminescent substrates. Sized-based protein separation and detection in capillaries were performed using the default protocols of the Jess system (ProteinSimple). β-Actin was used as a loading control. All capillary Western immunoassays were performed in triplicate for each protein, and duplicate experiments were performed per treatment condition, producing six repeated measurements per protein.

The data are presented as the mean values ± standard deviations across six repeated measurements. Statistical significance was calculated with Student’s t-test and thresholded at p ≤ 0.05 versus the control.

This research received institutional funding support from the Roseman University of Health Sciences and a research grant from dōTERRA International.

C.B., M.W. and D.K.H. are employees of dōTERRA International, a company that produces and sells essential oils. D.K.H. and C.B. participated in the initial conceptualization of the project. C.B. and M.W. analyzed the chemical composition of copaiba essential oil using a GC–MS method with good laboratory practice (GLP) compliance. 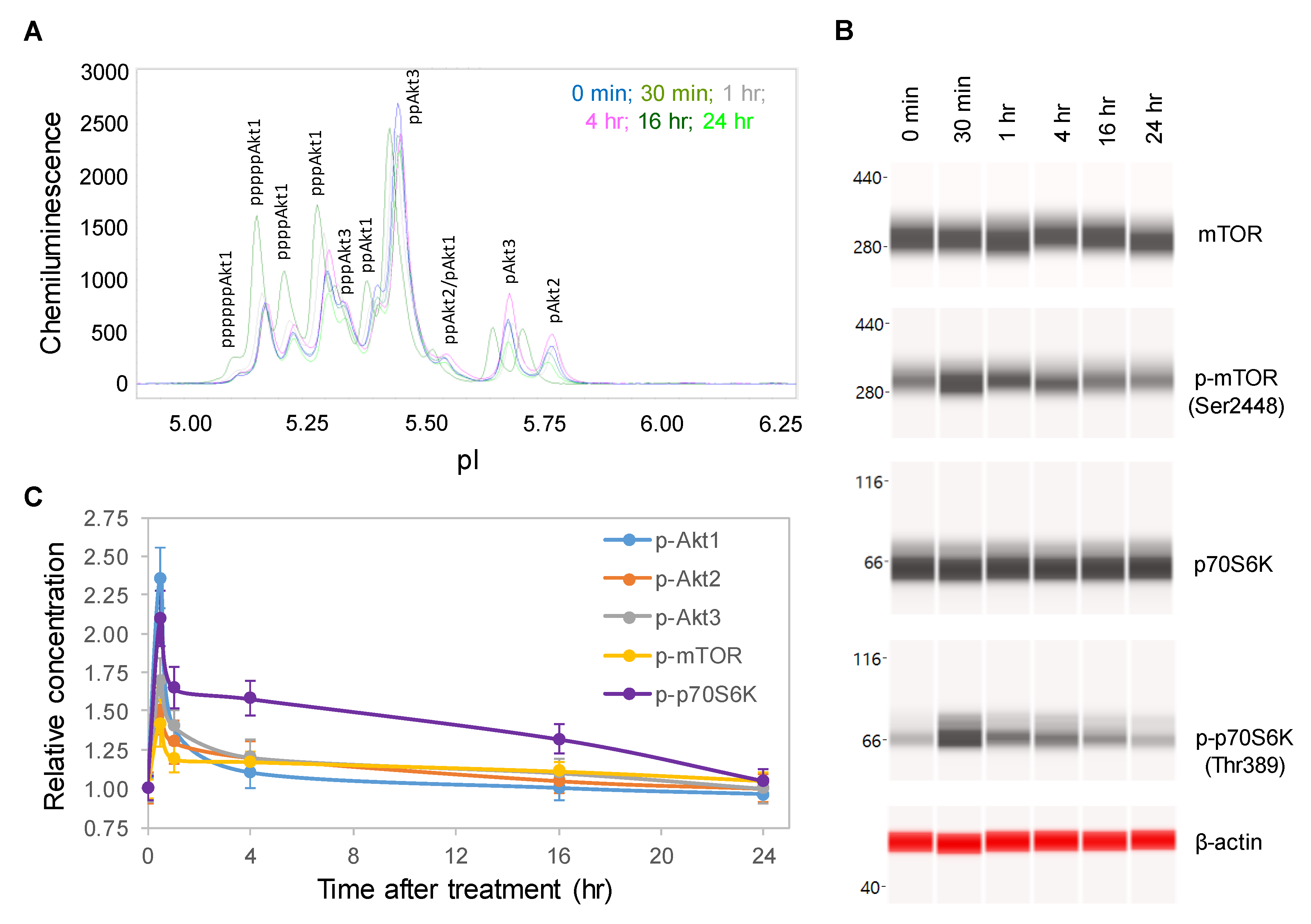 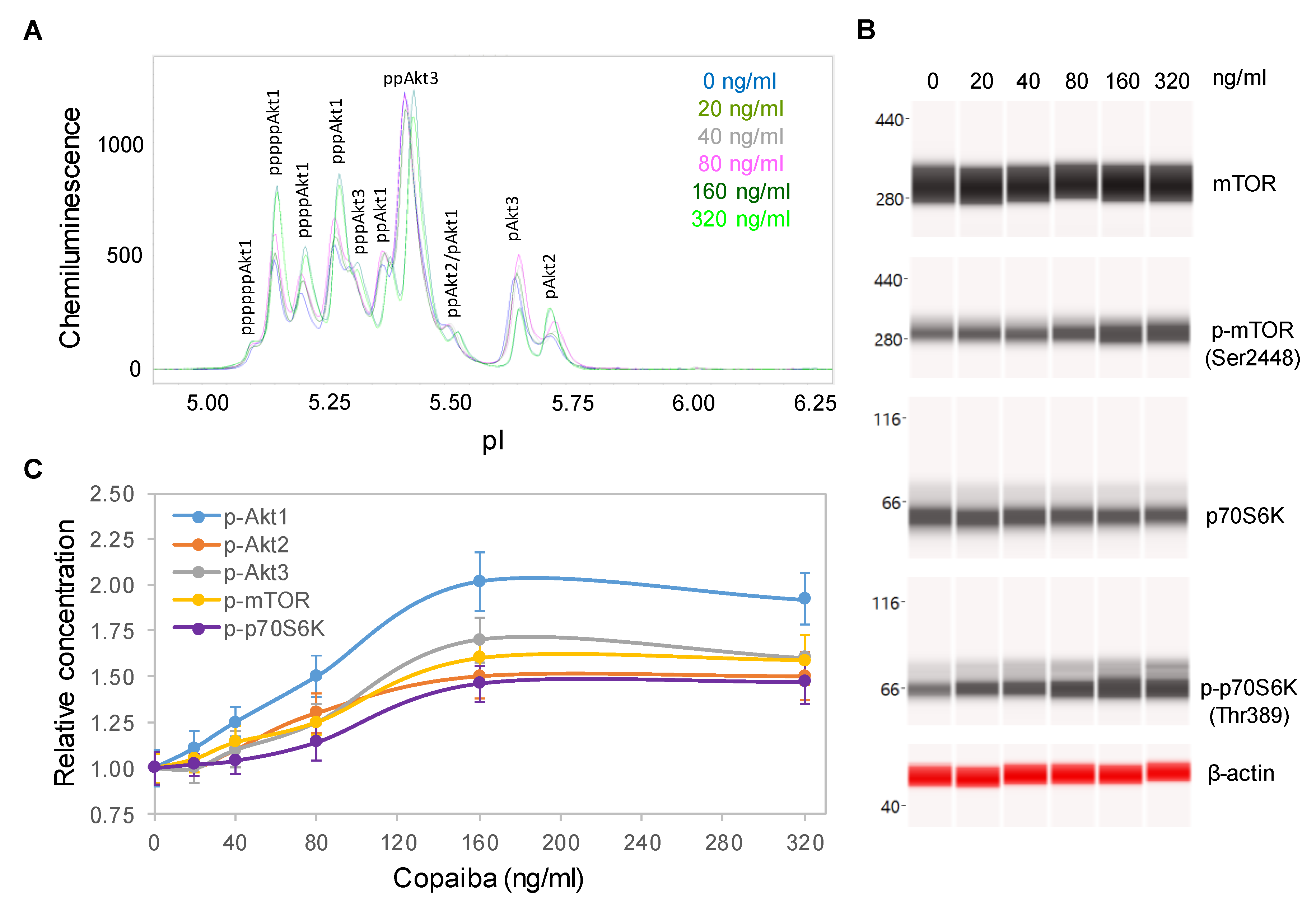