The Roles of NO and H2S in Sperm Biology: Recent Advances and New Perspectives
Previous Article in Journal

Building on our recent discovery of the zinc signature phenomenon present in boar, bull, and human spermatozoa, we have further characterized the role of zinc ions in the spermatozoa’s pathway to fertilization. In boar, the zinc signature differed between the three major boar ejaculate fractions, the initial pre-rich, the sperm-rich, and the post-sperm-rich fraction. These differences set in the sperm ejaculatory sequence establish two major sperm cohorts with marked differences in their sperm capacitation progress. On the subcellular level, we show that the capacitation-induced Zn-ion efflux allows for sperm release from oviductal glycans as analyzed with the oviductal epithelium mimicking glycan binding assay. Sperm zinc efflux also activates zinc-containing enzymes and proteases involved in sperm penetration of the zona pellucida, such as the inner acrosomal membrane matrix metalloproteinase 2 (MMP2). Both MMP2 and the 26S proteasome showed severely reduced activity in the presence of zinc ions, through studies using by gel zymography and the fluorogenic substrates, respectively. In the context of the fertilization-induced oocyte zinc spark and the ensuing oocyte-issued polyspermy-blocking zinc shield, the inhibitory effect of zinc on sperm-borne enzymes may contribute to the fast block of polyspermy. Altogether, our findings establish a new paradigm on the role of zinc ions in sperm function and pave the way for the optimization of animal semen analysis, artificial insemination (AI), and human male-factor infertility diagnostics. View Full-Text
Keywords: sperm; zinc; capacitation; oviductal reservoir; fertilization sperm; zinc; capacitation; oviductal reservoir; fertilization
►▼ Show Figures 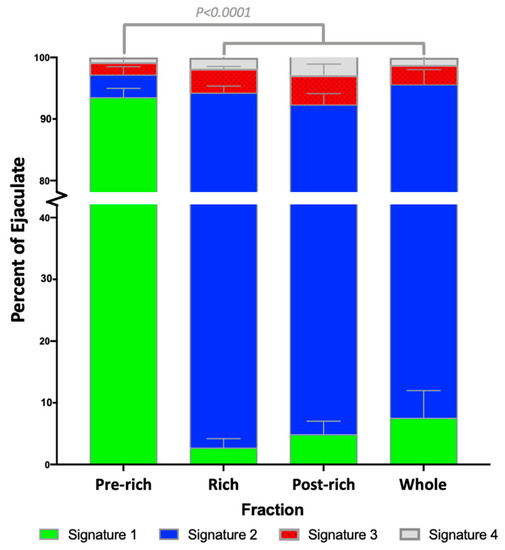