Neuromuscular Diseases Due to Chaperone Mutations: A Review and Some New Results
Previous Article in Journal

Studies of the human microbiome have elucidated an array of complex interactions between prokaryotes and their hosts. However, precise bacterial pathogen–cancer relationships remain largely elusive, although several bacteria, particularly those establishing persistent intra-cellular infections, like mycoplasmas, can alter host cell cycles, affect apoptotic pathways, and stimulate the production of inflammatory substances linked to DNA damage, thus potentially promoting abnormal cell growth and transformation. Consistent with this idea, in vivo experiments in several chemically induced or genetically deficient mouse models showed that germ-free conditions reduce colonic tumor formation. We demonstrate that mycoplasma DnaK, a chaperone protein belonging to the Heath shock protein (Hsp)-70 family, binds Poly-(ADP-ribose) Polymerase (PARP)-1, a protein that plays a critical role in the pathways involved in recognition of DNA damage and repair, and reduces its catalytic activity. It also binds USP10, a key p53 regulator, reducing p53 stability and anti-cancer functions. Finally, we showed that bystander, uninfected cells take up exogenous DnaK—suggesting a possible paracrine function in promoting cellular transformation, over and above direct mycoplasma infection. We propose that mycoplasmas, and perhaps certain other bacteria with closely related DnaK, may have oncogenic activity, mediated through the inhibition of DNA repair and p53 functions, and may be involved in the initiation of some cancers but not necessarily involved nor necessarily even be present in later stages. View Full-Text
Keywords: Mycoplasma; DnaK; cancer; p53; microbiota Mycoplasma; DnaK; cancer; p53; microbiota
►▼ Show Figures 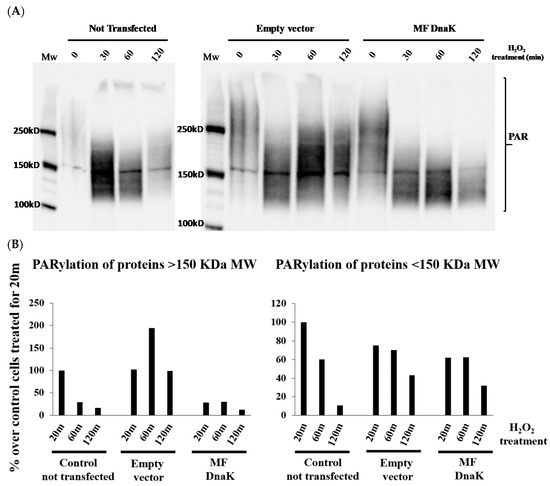