The reactive oxygen species (ROS) gene network, consisting of both ROS-generating and detoxifying enzymes, adjusts ROS levels in response to various stimuli. We performed a cross-kingdom comparison of ROS gene networks to investigate how they have evolved across all Eukaryotes, including protists, fungi, plants and animals. We included the genomes of 16 extremotolerant Eukaryotes to gain insight into ROS gene evolution in organisms that experience extreme stress conditions. Our analysis focused on ROS genes found in all Eukaryotes (such as catalases, superoxide dismutases, glutathione reductases, peroxidases and glutathione peroxidase/peroxiredoxins) as well as those specific to certain groups, such as ascorbate peroxidases, dehydroascorbate/monodehydroascorbate reductases in plants and other photosynthetic organisms. ROS-producing NADPH oxidases (NOX) were found in most multicellular organisms, although several NOX-like genes were identified in unicellular or filamentous species. However, despite the extreme conditions experienced by extremophile species, we found no evidence for expansion of ROS-related gene families in these species compared to other Eukaryotes. Tardigrades and rotifers do show ROS gene expansions that could be related to their extreme lifestyles, although a high rate of lineage-specific horizontal gene transfer events, coupled with recent tetraploidy in rotifers, could explain this observation. This suggests that the basal Eukaryotic ROS scavenging systems are sufficient to maintain ROS homeostasis even under the most extreme conditions. View Full-Text
Keywords: ROS; extremotolerance; resurrection plants ROS; extremotolerance; resurrection plants
►▼ Show Figures 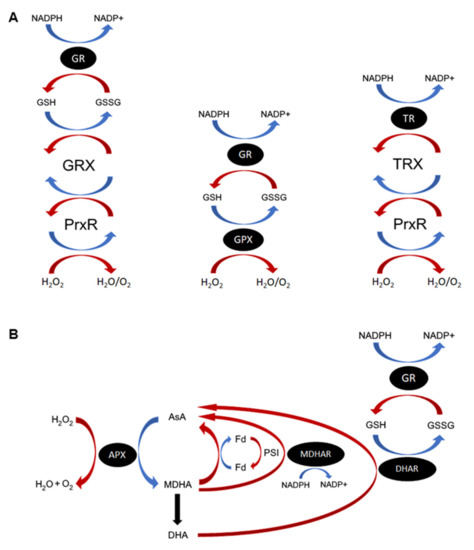