Genetically triggered thoracic aortic aneurysms (TAAs) are usually considered to exhibit minimal levels of inflammation. However, emerging data demonstrate that specific features of an inflammatory response can be observed in TAA, and that the extent of the inflammatory response can be correlated with the severity, in both mouse models and in human studies. Myeloperoxidase (MPO) is a key mediator of the inflammatory response, via production of specific oxidative species, e.g., the hypohalous acids. Specific tissue modifications, mediated by hypohalous acids, have been documented in multiple cardiovascular pathologies, including atherosclerosis associated with coronary artery disease, abdominal aortic, and cerebral aneurysms. Similarly, data are now emerging that show the capacity of MPO-derived oxidative species to regulate mechanisms important in TAA pathogenesis, including alterations in extracellular matrix homeostasis, activation of matrix metalloproteinases, induction of endothelial dysfunction and vascular smooth muscle cell phenotypic switching, and activation of ERK1/2 signaling. The weight of evidence supports a role for inflammation in exacerbating the severity of TAA progression, expanding our understanding of the pathogenesis of TAA, identifying potential biomarkers for early detection of TAA, monitoring severity and progression, and for defining potential novel therapeutic targets. View Full-Text
Keywords: thoracic aortic aneurysm; myeloperoxidase; inflammation; oxidative stress; matrix metalloproteinases thoracic aortic aneurysm; myeloperoxidase; inflammation; oxidative stress; matrix metalloproteinases
►▼ Show Figures 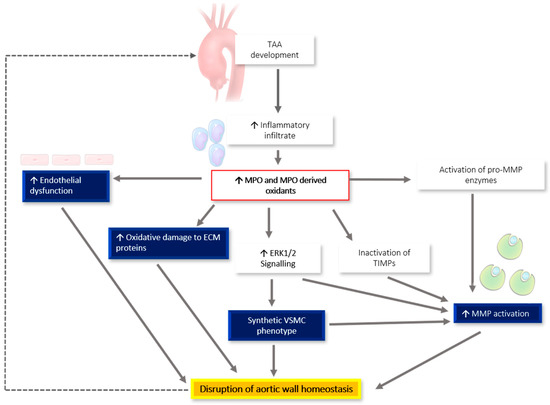