Oxidative stress (OS) represents a state of an imbalanced amount of reactive oxygen species (ROS) and/or a hampered efficacy of the antioxidative defense system. Cells of the central nervous system are particularly sensitive to OS, as they have a massive need of oxygen to maintain proper function. Consequently, OS represents a common pathophysiological hallmark of neurodegenerative diseases and is discussed to contribute to the neurodegeneration observed amongst others in Alzheimer’s disease and Parkinson’s disease. In this context, accumulating evidence suggests that OS is involved in the pathophysiology of Niemann-Pick type C1 disease (NPC1). NPC1, a rare hereditary neurodegenerative disease, belongs to the family of lysosomal storage disorders. A major hallmark of the disease is the accumulation of cholesterol and other glycosphingolipids in lysosomes. Several studies describe OS both in murine in vivo and in vitro NPC1 models. However, studies based on human cells are limited to NPC1 patient-derived fibroblasts. Thus, we analyzed OS in a human neuronal model based on NPC1 patient-specific induced pluripotent stem cells (iPSCs). Higher ROS levels, as determined by DCF (dichlorodihydrofluorescein) fluorescence, indicated oxidative stress in all NPC1-deficient cell lines. This finding was further supported by reduced superoxide dismutase (SOD) activity. The analysis of mRNA and protein levels of SOD1 and SOD2 did not reveal any difference between control cells and NPC1-deficient cells. Interestingly, we observed a striking decrease in catalase mRNA and protein levels in all NPC1-deficient cell lines. As catalase is a key enzyme of the cellular antioxidative defense system, we concluded that the lack of catalase contributes to the elevated ROS levels observed in NPC1-deficient cells. Thus, a restitution of a physiological catalase level may pose an intervention strategy to rescue NPC1-deficient cells from the repercussions of oxidative stress contributing to the neurodegeneration observed in NPC1. View Full-Text
Keywords: NPC1; ROS; catalase; SOD1; SOD2; iPSC NPC1; ROS; catalase; SOD1; SOD2; iPSC
►▼ Show Figures 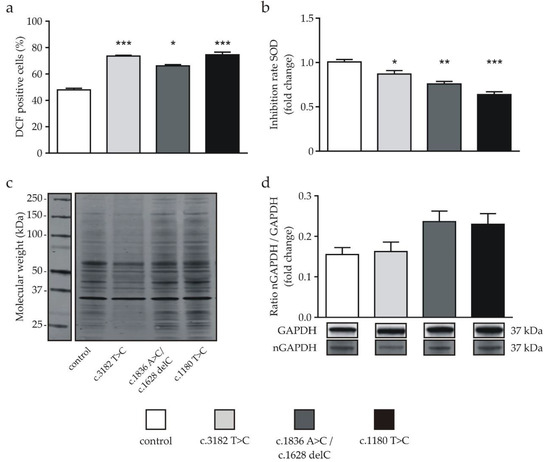