Human mutations in the transcription and nucleotide excision repair (NER) factor TFIIH are linked with three human syndromes: xeroderma pigmentosum (XP), trichothiodystrophy (TTD) and Cockayne syndrome (CS). In particular, different mutations in the XPB, XPD and p8 subunits of TFIIH may cause one or a combination of these syndromes, and some of these mutations are also related to cancer. The participation of TFIIH in NER and transcription makes it difficult to interpret the different manifestations observed in patients, particularly since some of these phenotypes may be related to problems during development. TFIIH is present in all eukaryotic cells, and its functions in transcription and DNA repair are conserved. Therefore, Drosophila has been a useful model organism for the interpretation of different phenotypes during development as well as the understanding of the dynamics of this complex. Interestingly, phenotypes similar to those observed in humans caused by mutations in the TFIIH subunits are present in mutant flies, allowing the study of TFIIH in different developmental processes. Furthermore, studies performed in Drosophila of mutations in different subunits of TFIIH that have not been linked to any human diseases, probably because they are more deleterious, have revealed its roles in differentiation and cell death. In this review, different achievements made through studies in the fly to understand the functions of TFIIH during development and its relationship with human diseases are analysed and discussed.
Keywords: Drosophila; TFIIH; human syndromes; Cancer; development Drosophila; TFIIH; human syndromes; Cancer; development

2. The Phenotypes of TFIIH Mutants in Drosophila and Their Relationships with Human Syndromes

3. Involvement of TFIIH in Cell-Cycle Control, Chromosome Instability and Cancer in Drosophila

4. Analysis of TFIIH Complex Dynamics at the Onset of Transcription at the Mid-Blastula Transition

Zygotic genome activation (ZGA), one of the more intriguing stages in animal development, is the moment when gene expression is activated for the first time [60]. During ZGA, thousands of genes are turned on simultaneously [60]. Drosophila has been an excellent model in which to study how this process takes place, and there are excellent reviews on this subject [for a recent review: 62]. The early fly embryo is a syncytium that initially suffers 8 fast and synchronized nuclear divisions without transcription conducted by maternal factors deposited in the egg [61]. After nuclear division 8, at the pre-mid blastula transition (pMBT), the first wave of transcription takes place, which activates approximately 100 genes [62], and the rate of nuclear division is increased. At nuclear division 13, the mid-blastula transition (MBT) occurs, and the second wave of transcription takes place, in which more than 3000 genes are activated [62]. Transcription of the first zygotic genes is activated by the transcription factor zelda (zld) with the help of the GAGA factor [63]. To activate transcription, these two factors recruit the PIC at the promoters of genes activated at ZGA, which includes the genes encoding TFIIH complex members. Therefore, this developmental stage in the fly facilitates the study of the recruitment of components of the basal transcription machinery for the first time during development. Studies on the dynamics of the PIC components began with the visualization of RNPII phosphorylated at its CTD by immunostaining, which revealed that it can be detected in somatic nuclei in the syncytial blastoderm only after nuclear division 8 [64] More recently, by using ChIP-nexus experiments, the occupancy of RNPII at the promoters of genes activated at the pMBT and MBT was determined [62]. Another PIC component initially analysed in early embryos was TATA-binding protein (TBP). Interestingly, TBP was found to be imported from the cytoplasm to the nuclei until ZGA [64].
In addition to RNPII and TBP dynamics and the functions of components of the PIC, only studies of TFIIH complex subunits have been performed in the early fly embryo. The first studies on the TFIIH complex suggested that most of the core subcomplex components of the TFIIH complex were cytoplasmic and that these components were localized in the nuclei before the first wave of transcription [65]. However, more refined studies using transgenic organisms expressing several TFIIH subunits fused with different florescent proteins have demonstrated that all the TFIIH subunits, including the CAK components, follow a similar dynamic pattern of expression in the syncytial blastoderm [48]. The TFIIH subunits oscillate between the nuclei and cytoplasm during synchronized nuclear division and are more concentrated in the nuclei. However, during mitosis, TFIIH can still be visualized on chromosomes, suggesting that some TFIIH complex is retained in chromatin due to the fast nature of nuclear division in the early embryo [48]. Intriguingly, in the interphase nucleus and during early mitosis, the TFIIH components can be observed as foci or grains that are similar in appearance to nuclear structures identified as liquid–liquid phase separation condensates Figure 3 [48]. It would be relevant to determine whether functional TFIIH is encased in these condensates and whether some of its subunits facilitate the formation of these membrane-free organelles.
These studies in Drosophila are important for understanding the role of TFIIH during development and to relate the TFIIH complex with the functions that are affected in cancer and human syndromes since mammalian models are more complicated and expensive.

Drosophila is a suitable model to analyse the effect of genetic alterations related to human diseases. In the particular case of TFIIH-related syndromes, it has been possible to study defects in the fly produced by mutations in different subunits at a level that cannot be attained in mammal models. In addition, interpretation of the complex genotype–phenotype relationship has been less complicated in Drosophila, particularly in phenotypes that are generated during the development of the organism, such as the increase in apoptosis in the nervous system and catastrophic mitosis in the early embryo and larval tissues. In addition, phenotypes in Drosophila similar to some of the manifestations of TTD or CS in patients, such as a thin cuticle, brittle bristles and the minute phenotype, were clearly shown to be caused by problems in transcription. Furthermore, in Drosophila, it has been possible to study mutations in other TFIIH complex subunits that appear to be highly deleterious in mammals. However, there are still several aspects of this complex that can be studied in Drosophila to complement work performed in other models and humans. For instance, it is necessary to analyse mutations in other core TFIIH subunits, such as p34 and p44, and compare the related phenotypes with the reported phenotypes following XPB, XPD, p52 and p8 mutation. Additionally, it would be very informative to determine the genetic interactions of the TFIIH complex with other PIC components and to analyse double mutants in CAK subunits with mutations in the TFIIH core. The TFIIH complex also interacts directly with several transcriptional activators in human cells, the homologues of which in Drosophila have been analysed by genetic interaction studies, and their analysis during development will be highly informative for understanding the function of several transcription activators during development. Finally, the performance of chemical genetic experiments by introducing substances that inhibit the enzymatic activities of the TFIIH complex in embryos will allow the role of these specific activities in different developmental processes to be determined.

This research was funded by PAPIIT/UNAM No. IN200315 grant to Mario Zurita. 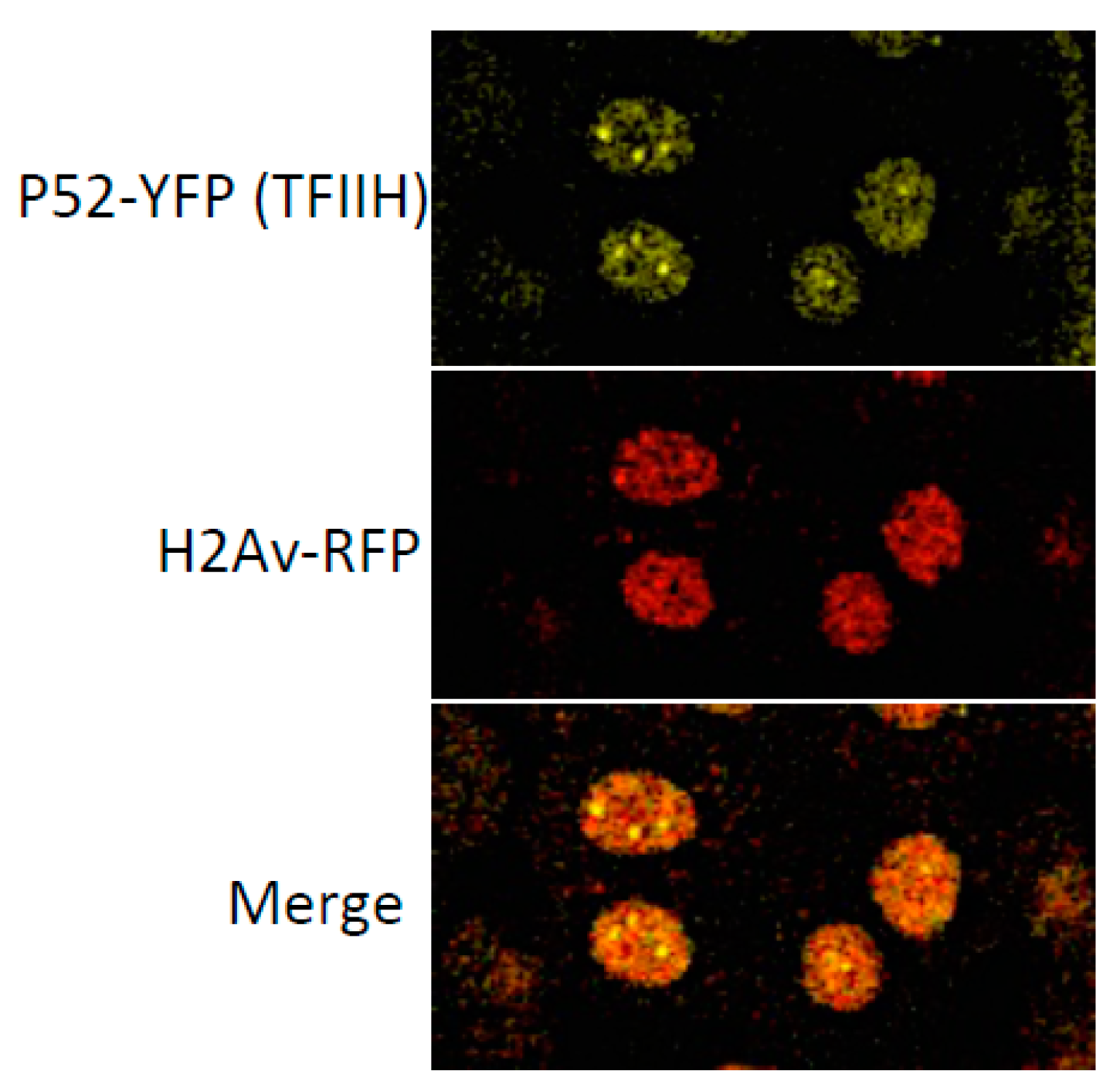