Traumatic brain injury (TBI) is one of the leading causes of mortality and disability around the world. Mild TBI (mTBI) makes up approximately 80% of reported cases and often results in transient psychological abnormalities and cognitive disruption. At-risk populations for mTBI include athletes and other active individuals who may sustain repetitive concussive injury during periods of exercise and exertion when core temperatures are elevated. Previous studies have emphasized the impact that increased brain temperature has on adverse neurological outcomes. A lack of diagnostic tools to assess concussive mTBI limits the ability to effectively identify the post-concussive period during which the brain is uniquely susceptible to damage upon sustaining additional injury. Studies have suggested that a temporal window of increased vulnerability that exists corresponds to a period of injury-induced depression of cerebral glucose metabolism. In the current study, we sought to evaluate the relationship between repetitive concussion, local cerebral glucose metabolism, and brain temperature using the Marmarou weight drop model to generate mTBI. Animals were injured three consecutive times over a period of 7 days while exposed to either normothermic or hyperthermic temperatures for 15 min prior to and 1 h post each injury. A 14C-2-deoxy-d-glucose (2DG) autoradiography was used to measure local cerebral metabolic rate of glucose (lCMRGlc) in 10 diverse brain regions across nine bregma levels 8 days after the initial insult. We found that repetitive mTBI significantly decreased glucose utilization bilaterally in several cortical areas, such as the cingulate, visual, motor, and retrosplenial cortices, as well as in subcortical areas, including the caudate putamen and striatum, compared to sham control animals. lCMRGlc was significant in both normothermic and hyperthermic repetitive mTBI animals relative to the sham group, but to a greater degree when exposed to hyperthermic conditions. Taken together, we report significant injury-induced glucose hypometabolism after repetitive concussion in the brain, and additionally highlight the importance of temperature management in the acute period after brain injury. View Full-Text
Keywords: traumatic brain injury; mild TBI; concussion; repetitive concussion; 2DG; hyperthermia; glucose metabolism traumatic brain injury; mild TBI; concussion; repetitive concussion; 2DG; hyperthermia; glucose metabolism
►▼ Show Figures 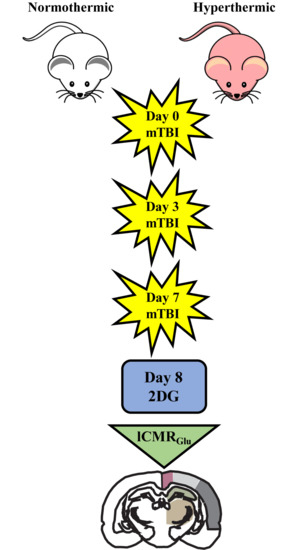