Influence of Sex on Urinary Organic Acids: A Cross-Sectional Study in Children
Previous Article in Journal

Catch bond, whose lifetime increases with applied tensile force, can often mediate rolling adhesion of cells in a hydrodynamic environment. However, the mechanical mechanism governing the kinetics of rolling adhesion of cells through catch-bond under shear flow is not yet clear. In this study, a mechanical model is proposed for catch-bond-mediated cell adhesion in shear flow. The stochastic reaction of bond formation and dissociation is described as a Markovian process, whereas the dynamic motion of cells follows classical analytical mechanics. The steady state of cells significantly depends on the shear rate of flow. The upper and lower critical shear rates required for cell detachment and attachment are extracted, respectively. When the shear rate increases from the lower threshold to the upper threshold, cell rolling became slower and more regular, implying the flow-enhanced adhesion phenomenon. Our results suggest that this flow-enhanced stability of rolling adhesion is attributed to the competition between stochastic reactions of bonds and dynamics of cell rolling, instead of force lengthening the lifetime of catch bonds, thereby challenging the current view in understanding the mechanism behind this flow-enhanced adhesion phenomenon. Moreover, the loading history of flow defining bistability of cell adhesion in shear flow is predicted. These theoretical predictions are verified by Monte Carlo simulations and are related to the experimental observations reported in literature. View Full-Text
Keywords: catch bond; rolling adhesion; Markovian process; shear rate; flow-enhanced adhesion; bistability catch bond; rolling adhesion; Markovian process; shear rate; flow-enhanced adhesion; bistability
►▼ Show Figures 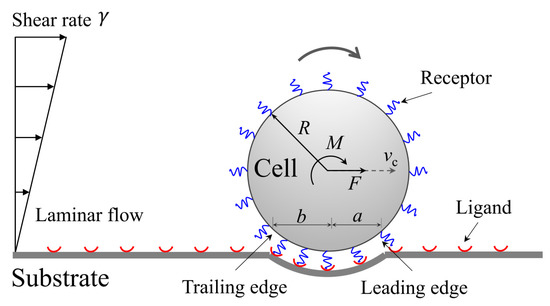