“Bridging the Gap” Everything that Could Have Been Avoided If We Had Applied Gender Medicine, Pharmacogenetics and Personalized Medicine in the Gender-Omics and Sex-Omics Era

Influence of Sex on Urinary Organic Acids: A Cross-Sectional Study in Children

The characterization of urinary metabolome, which provides a fingerprint for each individual, is an important step to reach personalized medicine. It is influenced by exogenous and endogenous factors; among them, we investigated sex influences on 72 organic acids measured through GC-MS analysis in the urine of 291 children (152 males; 139 females) aging 1–36 months and stratified in four groups of age. Among the 72 urinary metabolites, in all age groups, 4-hydroxy-butirate and homogentisate are found only in males, whereas 3-hydroxy-dodecanoate, methylcitrate, and phenylacetate are found only in females. Sex differences are still present after age stratification being more numerous during the first 6 months of life. The most relevant sex differences involve the mitochondria homeostasis. In females, citrate cycle, glyoxylate and dicarboxylate metabolism, alanine, aspartate, glutamate, and butanoate metabolism had the highest impact. In males, urinary organic acids were involved in phenylalanine metabolism, citrate cycle, alanine, aspartate and glutamate metabolism, butanoate metabolism, and glyoxylate and dicarboxylate metabolism. In addition, age specifically affected metabolic pathways, the phenylalanine metabolism pathway being affected by age only in males. Relevantly, the age-influenced ranking of metabolic pathways varied in the two sexes. In conclusion, sex deeply influences both quantitatively and qualitatively urinary organic acids levels, the effect of sex being age dependent. Importantly, the sex effects depend on the single organic acid; thus, in some cases the urinary organic acid reference values should be stratified according the sex and age. View Full-Text
Keywords: urine metabolome; GC; mass spectrometry; sex-specific reference values urine metabolome; GC; mass spectrometry; sex-specific reference values
►▼ Show Figures 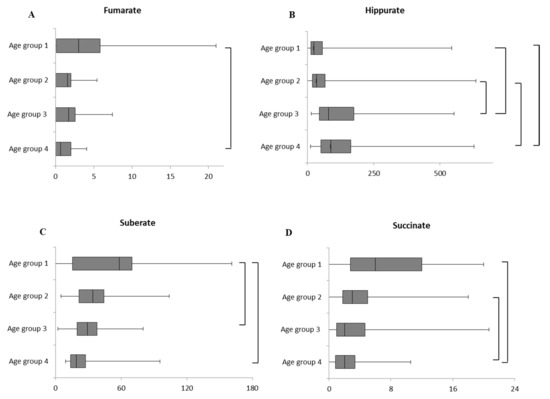