Alleviation of Multidrug Resistance by Flavonoid and Non-Flavonoid Compounds in Breast, Lung, Colorectal and Prostate Cancer

Over recent years, many authors discussed the effects of different natural compounds on glioblastoma (GBM). Due to its capacity to impair survival and progression of different cancer types, saffron extract (SE), named crocetin (CCT), is particularly noteworthy. In this work, we elucidated the antitumor properties of crocetin in glioma in vivo and in vitro models for the first time. The in vitro results showed that the four tumor cell lines observed in this study (U251, U87, U138, and U373), which were treated with increasing doses of crocetin, showed antiproliferative and pro-differentiative effects as demonstrated by a significant reduction in the number of viable cells, deep changes in cell morphology, and the modulation of mesenchymal and neuronal markers. Indeed, crocetin decreased the expression of Cluster of Differentiation CD44, CD90, CXCR4, and OCT3/4 mesenchymal markers, but increased the expression of βIII-Tubulin and neurofilaments (NFH) neuronal linage-related markers. Epigenetic mechanisms may modulate these changes, since Histone Deacetylase, HDAC1 and HDAC3 were downmodulated in U251 and U87 cells, whereas HDAC1 expression was downmodulated in U138 and U373 cells. Western blotting analyses of Fatty Acid Synthase, FASN, and CD44 resulted in effective inhibition of these markers after CCT treatment, which was associated with important activation of the apoptosis program and reduced glioma cell movement and wound repair. The in vivo studies aligned with the results obtained in vitro. Indeed, crocetin was demonstrated to inhibit the growth of U251 and U87 cells that were subcutaneously injected into animal models. In particular, the Tumor To Progression or TTP values and Kaplan–Meier curves indicated that crocetin had more major effects than radiotherapy alone, but similar effects to temozolomide (TMZ). An intra-brain cell inoculation of a small number of luciferase-transfected U251 cells provided a model that was able to recapitulate recurrence after surgical tumor removal. The results obtained from the orthotopic intra-brain model indicated that CCT treatment increased the disease-free survival (DFS) and overall survival (OS) rates, inducing a delay in appearance of a detectable bioluminescent lesion. CCT showed greater efficacy than Radio Therapy (RT) but comparable efficacy to temozolomide in xenograft models. Therefore, we aimed to continue the study of crocetin’s effects in glioma disease, focusing our attention on the radiosensitizing properties of the natural compound and highlighting the ways in which this was realized. View Full-Text
Keywords: saffron extract; crocetin; glioblastoma in vivo xenograft models saffron extract; crocetin; glioblastoma in vivo xenograft models
►▼ Show Figures 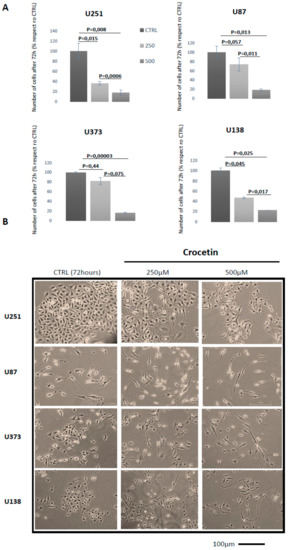