NR2F6 as a Prognostic Biomarker in HNSCC

Head and neck squamous cell carcinoma (HNSCC)is the 6th most common cancer in humans worldwide and is associated with a poor prognosis for patients. NR2F6 has been identified as an immune checkpoint molecule in tumor-infiltrating T lymphocytes and is associated with a poor prognostic outcome in various cancers. The prognostic value of NR2F6 in HNSCC has not been described yet. We used a large, representative and clinically well-characterized cohort of 383 HNSCC patients, of which 22.4% developed a local recurrence. The NR2F6 expression was analyzed by using immunohistochemistry and was afterward correlated with clinical characteristics and clinicopathological features of HNSCC patients. Primary tumors from patients who develop a local recurrence have a higher NR2F6 expression than primary tumors which do not develop a local recurrence. Furthermore, a high NR2F6 expression is associated with poorer recurrence-free survival, although there is no correlation with overall survival. NR2F6 expression is independent of the T stage and UICC stage. NR2F6 might be a new prognostic biomarker for the early detection of local recurrences in HNSCC patients. Therefore, it may help to improve the recognition of patients who would benefit from more frequent follow-up examinations.
Keywords: HNSCC; NR2F6; local recurrence; prognosis; recurrence-free survival; biomarker; immune checkpoint; TMA; FFPE HNSCC; NR2F6; local recurrence; prognosis; recurrence-free survival; biomarker; immune checkpoint; TMA; FFPE

Head and neck squamous cell carcinoma (HNSCC) is the sixth most common cancer in humans worldwide [1,2]. Surgery and/or chemoradiotherapy are the most common therapeutic options but are often linked to side effects, which are hard to endure for patients. They suffer from functional impairment such as dysphagia or permanent voice changes, as well as scars and visible deformations or chronic pain after surgery. The chemoradiotherapy may lead to xerostomia, necrosis, and fibrosis of the bone and soft tissue in the head and neck region [3]. Despite all therapeutic approaches, the prognosis for HNSCC patients is still rather poor, and the side-effects are severe. The majority of patients are initially diagnosed in advanced stages, i.e., UICC III and IV. With higher stages, the survival rates decrease significantly. The two-year survival rate for patients diagnosed with UICC stage III and IV tumors is only at nearly 30%, while 30–50% develop a local recurrence [2,4,5,6]. New therapeutic approaches, like immune checkpoint therapy or changes in the therapy regimen, have not improved this fate significantly. Additionally, the question of whether one should use neoadjuvant or adjuvant chemotherapy is still controversial [4,7,8,9].
Early identification of primary tumors that will develop a local recurrence is difficult and does not always depend on the UICC stage or tumor size. We aim to find new independent prognostic biomarkers, which may help to risk-stratify patients at the time of diagnosis and therefore to identify patients whose tumors will develop a local recurrence. These patients could be included in more frequent follow-up schedules in order to diagnose and therefore treat local recurrences earlier than in the regular follow-up schedules.
NR2F6 (nuclear receptor subfamily 2, group F, member 6), also known as Ear-2 or COUP-TFIII, is an orphan nuclear receptor. It regulates many biological and embryological processes, such as organogenesis and cellular differentiation [10,11]. It is also known for its functions as a transcription factor, coactivator, and repressor for the expression of various genes, including hormones, hormone receptors, and apolipoproteins [12,13,14,15,16,17]. In immune cells, it helps to regulate the expression of cytokines like Interleukin-21 (IL-21) or Interferon-γ (IFN-γ) [18,19], and it is also a negative regulator of T-cell development [20]. NR2F6 was defined as an intracellular immune checkpoint in tumor-infiltrating T-cells. It correlates with the expression of programmed cell death-1 (PD-1), programmed cell death ligand-1 (PD-L1), and cytotoxic T lymphocyte-associated protein 4 (CTLA-4), and it was assumed to be a potential target for immunotherapy [21,22,23]. However, NR2F6 has not only been described in tumor-infiltrating lymphocytes, but also in tumor cells of different solid cancer types, e.g., hepatocellular carcinoma, ovarian cancer, cervical cancer, and colon cancer. For example, it is associated with the occurrence of pelvic lymph node metastases in cervical cancer and with poorer overall survival (OS) and cisplatin resistance in ovarian cancer [24,25,26,27].
Herein, we investigated, in particular, the characteristics of NR2F6 expression in HNSCC tissue, as well as the relationship between NR2F6 expression and the clinicopathological data of HNSCC patients, and we explored the value of NR2F6 as a prognostic factor.

Immunohistochemically stained HNSCC tissue showed a broad variety of staining patterns. While some tissue samples were stained completely negative for NR2F6 (Figure 1a), others were stained partly (Figure 1b,c) or completely positive (Figure 1d). The overall staining intensity varied between different tissue samples, reflecting an intercase heterogeneity, but also in between the nuclei of distinct cancer tissues, reflecting an intracase heterogeneity (Figure 1a–d).

2.6. The NR2F6 Expression Is Independent of T and UICC Stages and the p16 Status of PTs

We compared the NR2F6 expression in PTs of different T and UICC stages. We could show that the NR2F6 expression was independent of the T stage and UICC stage, as no significant differences were found between stages T1 and T2 versus stages T3 and T4 (p = 0.718) or between UICC stages I and II versus III and IV (p = 0.474), respectively (Figure 7). Furthermore, we analyzed the correlation between NR2F6 expression in PTs and the age, sex, alcohol abuse, nicotine abuse, and p16 status of the patients, but no significant correlations were found either (Table S3).

Our study protocol was approved by the Ethics Committee of the University of Luebeck (project code AZ 16-277, date of approval 18 November 2016) and conducted in accordance with the Declaration of Helsinki. We used our vast and well-characterized HNSCC cohort for the analysis of NR2F6 expression. Our group established a retrospective and anonymized cohort of 383 Patients with HNSCCs [28,38]. All patients were diagnosed between 2012 and 2015 in our Institute of Pathology and treated in the on-campus Department for Otorhinolaryngology of the University Medical Center Schleswig-Holstein in Luebeck. All clinical data were obtained from medical records. 22.1% were female, and 77.6% were male. 81.1% of all patients consumed nicotine (at least one pack per year), and 40.8% consumed alcohol, whereas 11.5% and 53.9% did not consume nicotine or alcohol, respectively. 44.8% of all PTs were pharyngeal HNSCCs (including 13.6% hypopharyngeal HNSCCs and 31.2% oropharyngeal HNSCCs), 29.1% were laryngeal HNSCCs, 23.0% were HNSCCs of the oral cavity, and 3% were located in other regions of the head and neck or were cancers of unknown primary (CUP). 73.9% of all PTs were p16 negative, and 26.1% were p16 positive. 77.6% of all patients did not develop and 22.4% did develop an LR. At the time of the first-time diagnosis, 50.0% of PTs were classified as T stage 1/2 and 49.4% as T stage 3/4; 37.6% were classified as UICC stage I/II and 62.1% as UICC-stage III/IV. TNM stages were assessed by the 8th edition of the TNM classification for HNSCC. We used tissue of PTs (n = 330), LMs (n = 127), DMs (n = 21), and LRs (n = 62) for analyzation of the NR2F6 expression.
Formalin-fixed paraffin-embedded (FFPE) tumor tissues were sampled and arranged to form tissue microarrays (TMAs), as previously described [39]. The tissue of PTs, LMs, DMs, and LRs were used. Each TMA consisted of triplet cores of 1 mm2 from up to 54 tumor samples and up to six samples of benign tissue from the head and neck region. For a statistical evaluation, we analyzed three core samples from each tumor and calculated the mean value.

4.2. Immunohistochemistry and Evaluation of Stained Slides

We performed immunohistochemical staining on 4-µm thin sections of FFPE tissue after it was deparaffinized and antigens were heat-mediated retrieved, as previously described [40]. For the anti-NR2F6 antibody (rabbit polyclonal, 1:50, ab137496, Abcam, Cambridge, UK), the IView DAB Detection Kit was used on a Ventana BenchMark automated staining system (Roche, Basel, Switzerland), as previously described [41].
NR2F6 stained slides were scanned and digitalized by using the Ventana iScan HT scanner (VentanaTuscon, AZ, USA). For the digital quantified analysis, the semi-automatic image analysis software Definiens Tissue Studio (Definiens Developer XD 2.0, Definiens AG, Munich, Germany) was used. With this tool, the analysis of the staining intensities in different parts of the cell is possible. To exclude benign tissue and stromal cells, tumor cell areas were manually annotated as a region of interest (ROI) for each TMA core by a board-certified pathologist. The brown staining intensity of tumoral nuclei in the annotated area reached a readout with a range from 0.012–0.734. Staining thresholds were set to differ between negative and positive nuclei. The proportion of positive tumor cells in all tumor cells was detected automatically as a positive index (readout from 0–100). This positive index was used to reflect a staining homogeneity in further analyses.
The immunohistochemical staining of our HNSCC cohort showed a high variation of the staining intensity and the number of stained tumor cells within the tumor tissue. Some HNSCCs were stained exclusively positive, while some others were stained exclusively negative for NR2F6. Other tumors included both negative cells and positive cells with varying staining intensities. The positive index and the staining intensity were multiplied and transformed into an expression index (score from 0–71.25), which displayed the NR2F6 staining intensity, as well as the heterogeneity of the tumor. For further analyses, we exclusively employed the NR2F6 expression index to describe the NR2F6 expression in HNSCC tissues. An expression index between 0 and 1 was considered negative, whereas an expression index >1 was considered positive. The positive expression indices were divided into the subgroups low (expression index 1–6), medium (expression index 6–17), and high (expression index 17–72). All steps of the digital analysis, except for slide scanning, were performed on the same computer (Windows 7 based, 24” monitor, resolution 1920 × 1080 px.). This approach was previously published and used by our group [38,42].

This research was funded by a grant from the Deutsche Krebshilfe (grant number 70113940) to L.K., and (grant number 70112676) to F.-O.P. and a clinical scientist fellowship of the Medical Faculty of the University of Luebeck (J26-2018) to C.I. Role of the Funding Sources: Public funding of cancer research.

The authors declare no conflict of interest. The funders had no role in the design of the study; in the collection, analyses, or interpretation of data, in the writing of the manuscript, or in the decision to publish the results. 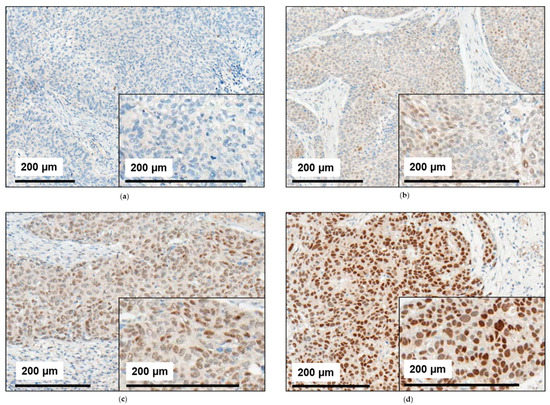 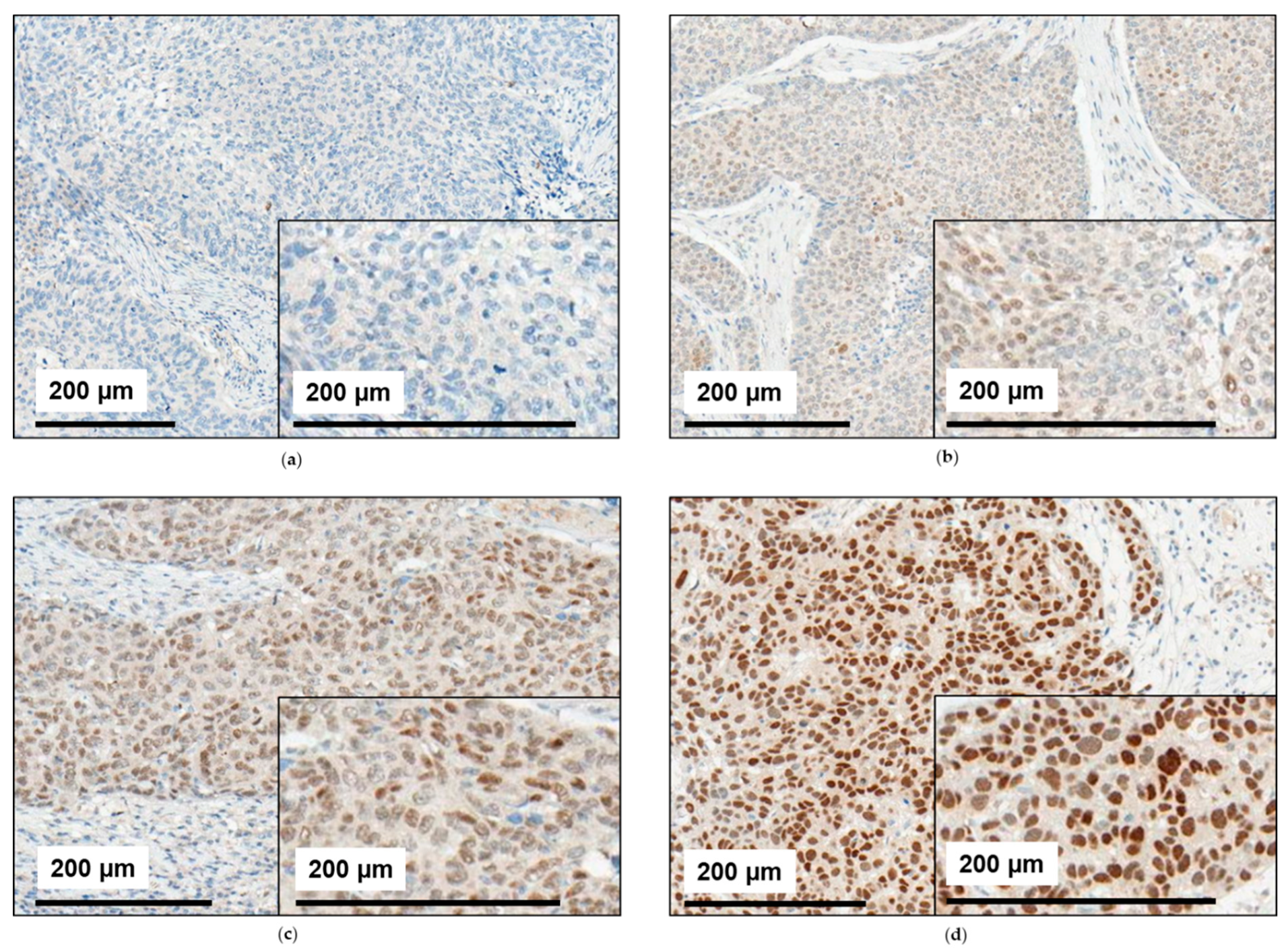 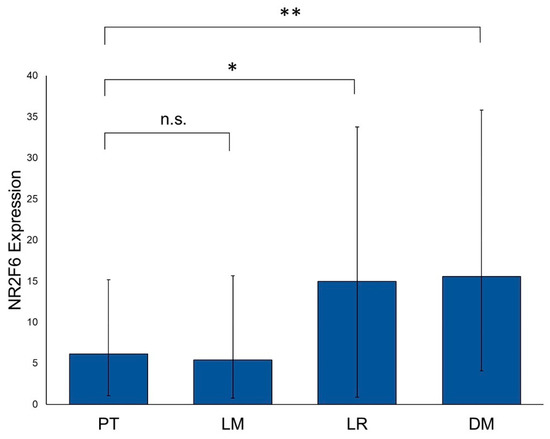 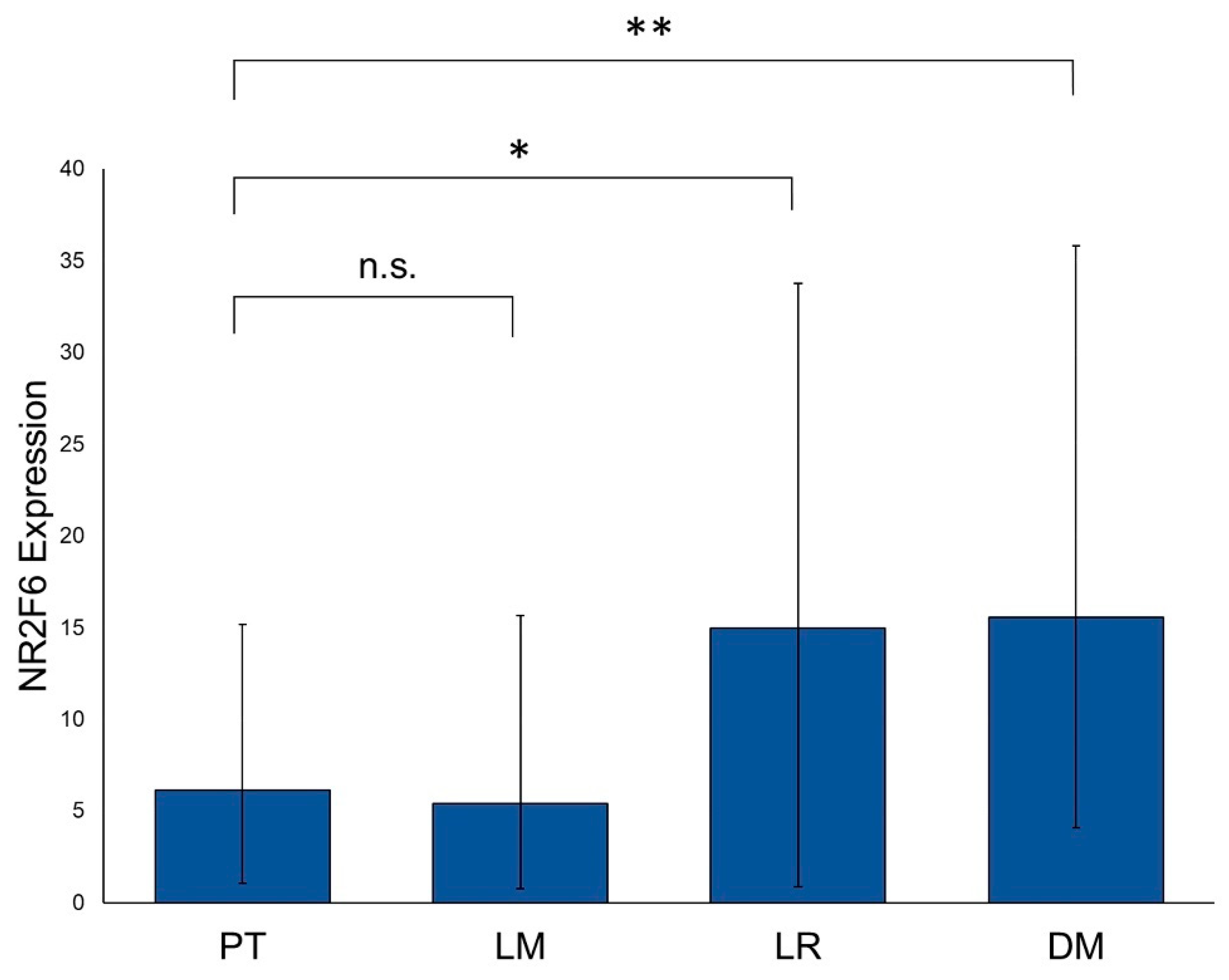 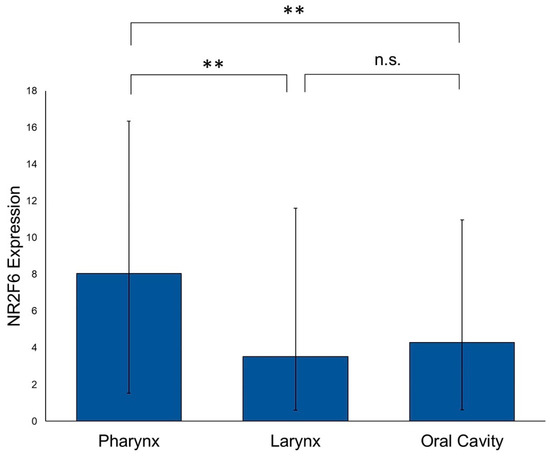 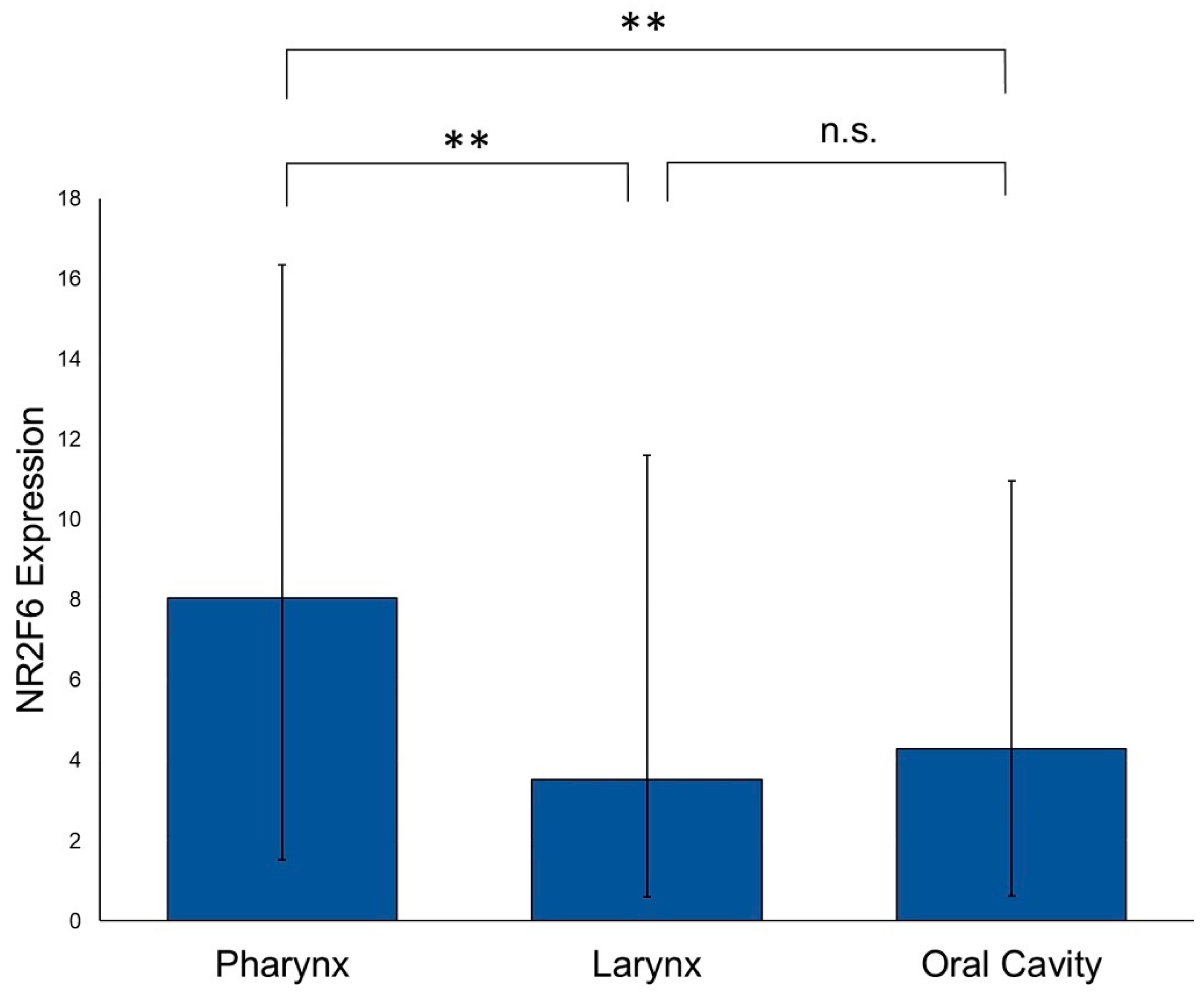 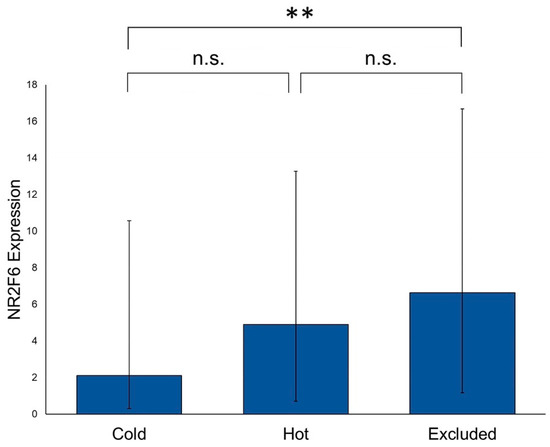 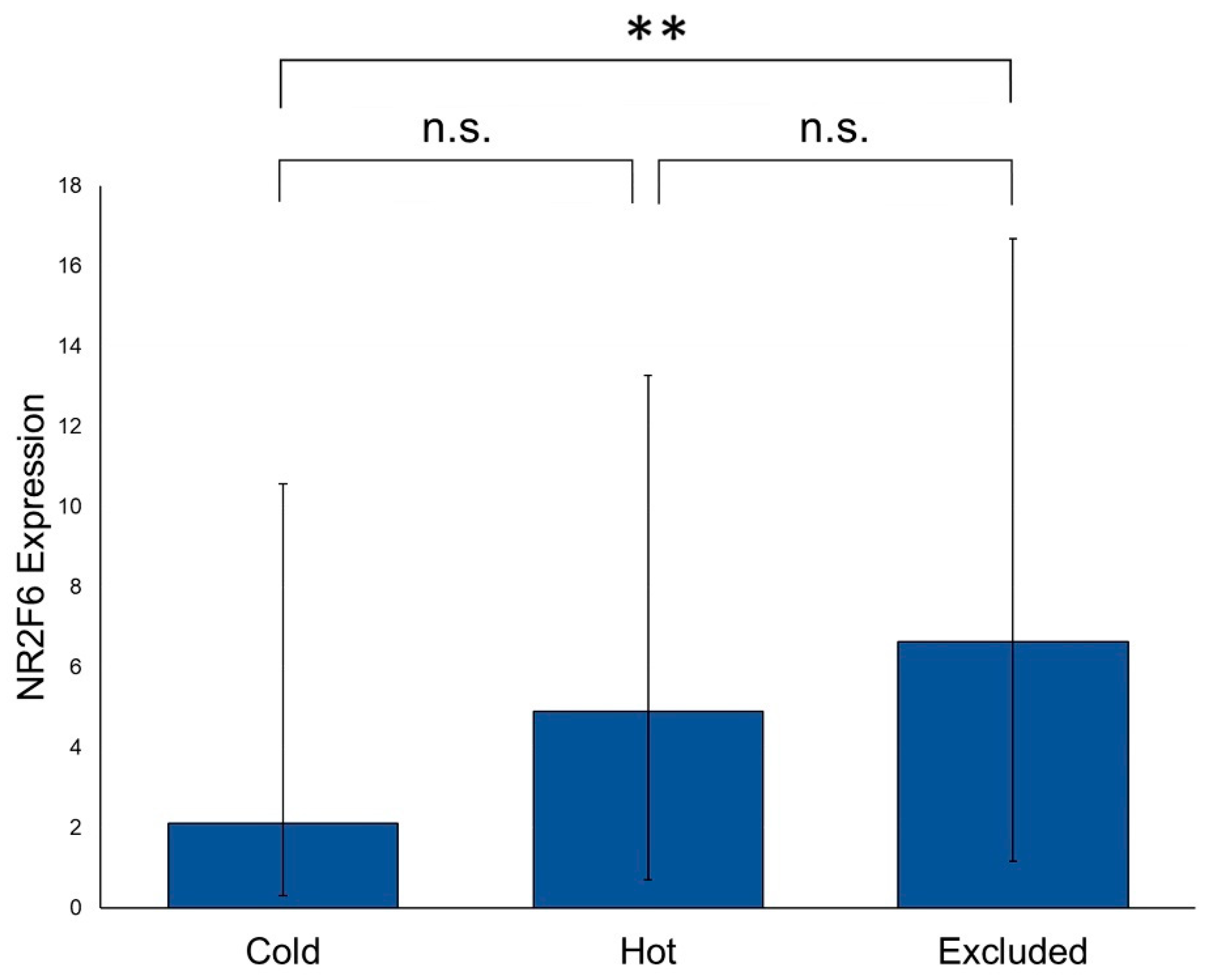