Parkinson’s disease (PD) is a chronic low-grade inflammatory process in which activated microglia generate cytotoxic factors—most prominently peroxynitrite—which induce the death and dysfunction of neighboring dopaminergic neurons. Dying neurons then release damage-associated molecular pattern proteins such as high mobility group box 1 which act on microglia via a range of receptors to amplify microglial activation. Since peroxynitrite is a key mediator in this process, it is proposed that nutraceutical measures which either suppress microglial production of peroxynitrite, or which promote the scavenging of peroxynitrite-derived oxidants, should have value for the prevention and control of PD. Peroxynitrite production can be quelled by suppressing activation of microglial NADPH oxidase—the source of its precursor superoxide—or by down-regulating the signaling pathways that promote microglial expression of inducible nitric oxide synthase (iNOS). Phycocyanobilin of spirulina, ferulic acid, long-chain omega-3 fatty acids, good vitamin D status, promotion of hydrogen sulfide production with taurine and N-acetylcysteine, caffeine, epigallocatechin-gallate, butyrogenic dietary fiber, and probiotics may have potential for blunting microglial iNOS induction. Scavenging of peroxynitrite-derived radicals may be amplified with supplemental zinc or inosine. Astaxanthin has potential for protecting the mitochondrial respiratory chain from peroxynitrite and environmental mitochondrial toxins. Healthful programs of nutraceutical supplementation may prove to be useful and feasible in the primary prevention or slow progression of pre-existing PD. Since damage to the mitochondria in dopaminergic neurons by environmental toxins is suspected to play a role in triggering the self-sustaining inflammation that drives PD pathogenesis, there is also reason to suspect that plant-based diets of modest protein content, and possibly a corn-rich diet high in spermidine, might provide protection from PD by boosting protective mitophagy and thereby aiding efficient mitochondrial function. Low-protein diets can also promote a more even response to levodopa therapy. View Full-Text
Keywords: nutraceuticals; peroxynitrite; oxidant activity; Parkinson’s disease; prevention; therapy nutraceuticals; peroxynitrite; oxidant activity; Parkinson’s disease; prevention; therapy
►▼ Show Figures 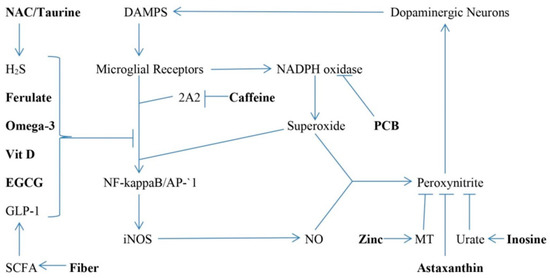