Galactofuranose-Related Enzymes: Challenges and Hopes
Next Article in Special Issue

Human space missions have experienced a revival in recent years. While the National Aeronautics and Space Administration (NASA) aims for a manned mission to Mars in co-operation with other space agencies, suborbital commercial space flights are about to enter the private sector. Given the expected rise in manned space flights, space medicine is gaining major importance as a necessity for safe and successful missions in the future [1].
In the absence of gravity, the human body undergoes multiple adaptational processes, which have been analyzed in previous studies [2]. Above all, changes in the cardiovascular system have been reported [3]. Cardiovascular causes are involved in the majority of medical complications in human space missions and represent an important target in space medicine [3,4]. In this regard, the most significant change is an increase in cardiac output of up to 40% in microgravity [3,5]. In consequence, a change in the baroreceptor reflex as well as in organ blood supply and a dysregulation of the cerebrovascular system can be observed in weightlessness [3,6]. However, it remains unclear if the increase in perfusion compensates for a higher metabolic demand in weightlessness or if the peripheral resistance is too low for the human heart in microgravity conditions [7]. Given the observed adaptational changes in the heart, recent studies also speculate about the possibility of a reduction in cardiac performance due to the deconditioning and restructuring of the heart, thus inducing heart failure and, in consequence, potential arrhythmias [8]. In addition to these changes, long-term exposure to weightlessness was reported to cause a dysregulation of the immune system and an alteration of the microbiome, leading to the increased virulence of pathogens in weightlessness [7]. Furthermore, atrophic processes in bones and muscles are frequent findings after long-term exposure to weightlessness [9]. A recent investigation of our study group also observed a decrease in hemoglobin and an increase in the glomerular filtration rate (GFR) [10]. However, while the changes mentioned above have been described and analyzed extensively by numerous studies, further investigations of the molecular background of these processes remain scarce.
Cardiac biomarkers have been studied extensively over recent years and represent novel and promising diagnostic tools in the assessment of cardiovascular disease entities. Especially in heart failure, biomarkers have been proven to have great potential regarding diagnosis and prognosis. In this context, a multimarker approach was reported as most effective due to the incorporation of different pathophysiological processes relevant to the cardiovascular system [11]. Among them, the heart-type fatty acid binding protein (H-FABP—myocardial ischemia), soluble suppression of tumorigenicity 2 (sST-2—myocardial strain/stress and inflammation) and its ligand interleukin-33 (IL-33—inflammation), growth differentiation factor-15 (GDF-15—inflammation, remodelling), soluble urokinase-type plasminogen activator receptor (suPAR—inflammation, remodelling) and Fetuin-A (vascular calcification) have shown promising results in prior studies and have also found clinical application in the treatment of heart failure and cardiovascular disease [12,13,14,15,16].
Accordingly, given the lack of information on the molecular background of physiologic changes in response to weightlessness, we sought to perform a head-to-head analysis of these six heart failure biomarkers in humans undergoing parabolic flight as a spaceflight analogue. Thereby, we aimed to better understand the molecular mechanisms and cardiac involvement in these adaptational processes and thus enlighten the topic of weightlessness-induced heart failure.

In total, this study included 14 healthy volunteers (eight males) with a mean age of 28.9 years. The detailed baseline characteristics for all 14 volunteers are presented in Table 1.

The study was conducted in accordance with the Declaration of Helsinki (1975, revised in 2008) and the protocol was approved by the German Ethics Committee of the Medical Faculty of the University Hospital Duesseldorf, Germany (Date of approval: August 14th, 2017; Project Identification number: 2017054297) and by the French Ethics Committee (Comité de Protection des Personnes (CPP Nord-Ouest III) of the Medical Faculty of the University of Caen (Date of approval: 6 September 2017; Project Identification number: 2017-A01185-48). In total, we enrolled 14 healthy participants in this study. Recruitment was conducted at the University Hospital of Duesseldorf, Germany. All the participants signed a written informed consent form. The inclusion criteria were defined as: age >18 years, airworthiness, cardiorespiratory health, spontaneous circulation and signed informed consent. The exclusion criteria were defined as: a history of primary cardiovascular and respiratory diseases or the regular intake of medication, except for oral contraceptives; missing or withdrawal of informed consent; insufficient requirements for airworthiness; and a positive pregnancy test. Further details have been published in a study outline paper of our study group [36].

A “Parabolic flight” represents a special aerial maneuver aimed at achieving a state of weightlessness (Figure 3). From a stabilized level-flight altitude (1 g), a steep ascent up to 47° is initiated by the pilots (1.8 g). After this climb, the so-called “injection” maneuver is performed. The power thrust is reduced, and the plane is directed into descent to follow the trajectory. During this phase, the vertical load factor shifts to zero gravity. With the plane tilting forward, the exit phase is initiated, leading to an up-to-45° descent and a second phase of hypergravity (1.8 g), before re-entering the steady flight (1 g) [37]. Each phase averages between 20 and 25 s, respectively [37].

The study was conducted as part of the 31st Parabolic Flight Campaign (PFC) of the German space agency (Deutsches Zentrum für Luft- und Raumfahrt-DLR), which took place from February 26th to March 11th, 2018, in Bordeaux, France. All flights were performed by the company NoveSpace (France, Mérignac). In total, four flight days were conducted in the course of the PFC, with one flight day consisting of 31 parabolas. Each study subject participated in one flight day and repetitive participation was avoided. Blood samples were drawn at three different time-points: 1 h prior to parabolic flight (baseline 08:00 ± 0.75 h), one hour after the parabolic flight (13:00 ± 1.0 h) and 24 h after the parabolic flight (08:00 ± 0.75 h) Serum samples were collected with individual punctures at each time point, using the following materials: BD vacutainer tubes (Becton Dickinson, Mountain View, CA, USA), 3 serum-separating tubes (SST) (Reference # 367957; tube size: 75 × 13 mm; draw volume: 3.5 mL) and 1 SST tube (Reference # 367955; tube size: 100 × 13 mm; draw volume: 5 mL). The serum sample aliquots were frozen and stored at −80 °C for further analysis after blood withdrawal.

A statistical analysis was performed using GraphPad Prism software (GraphPad Software, USA) and SPSS (IBM SPSS Statistics, USA). Correlation analyses were conducted using Spearman’s Rank correlation. All data are given as mean ± standard error of the mean (SEM). The concentrations of biomarkers between time points were compared using the Wilcoxon matched-pairs test. To test the robustness of our findings, we also conducted a fold change analysis, again using the Wilcoxon matched-pairs test. p-values < 0.05 were considered statistically significant. A p-value of <0.05 was indicated as *, and a p of <0.01 as **.

In conclusion, our findings indicate a decrease in cardiac stress, matching former studies. On this regard, a potential reduction in cardiac performance by means of deconditioning and restructuring of the heart in weightlessness must be taken into account. Furthermore, our data suggest an influence of weightlessness on the immune system through impairment and a decrease in inflammatory activation. Additionally, our findings propose a potential difference in calcium-homeostasis between short- and long-term exposure to weightlessness. However, given the novelty and the hypothesis-generating approach of the present study, further investigations on the adaptational processes are warranted.

The biggest limitation of our study constitutes the small sample size, especially with regards to the biological and analytical variability of biomarkers. Nevertheless, the changes in biomarker levels were consistent in a fold change analysis, thus indicating robust results. When interpreting the findings of our study, one must keep in mind that the time frames of actual zero gravity were limited in the course of the parabolic flight maneuver. During an average flight day, the cumulative duration of weightlessness in total averaged 11 min and 20 s. Moreover, hypergravity must be considered as a potential confounder in parabolic flight. However, studies have shown a good comparability of short-time weightlessness by means of parabolic flight with space missions with regards to hemodynamic changes. Additionally, given the lack of previous analyses, no reference values are available in the literature. Thus, the hypothesis-generating character of this study must be emphasized.

The present study was funded by the German Aerospace center (DLR) as well as the German Federal Ministry for Economic Affairs and Energy.

We would like to thank the German Aerospace center (DLR) as well as the German Federal Ministry for Economic Affairs and Energy for provision by means of support and funding for the conduction of the outlined study. Furthermore, we would like to thank NoveSpace (France) as well as all study participants and investigators involved in this project for their ongoing effort and support.

The funders had no role in the design of the study; in the collection, analysis, or interpretation of data; in the writing of the manuscript; or in the decision to publish the results. 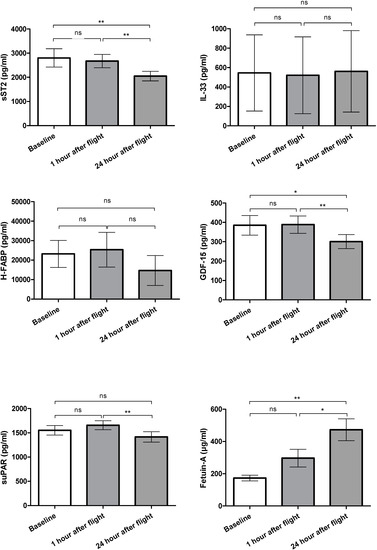 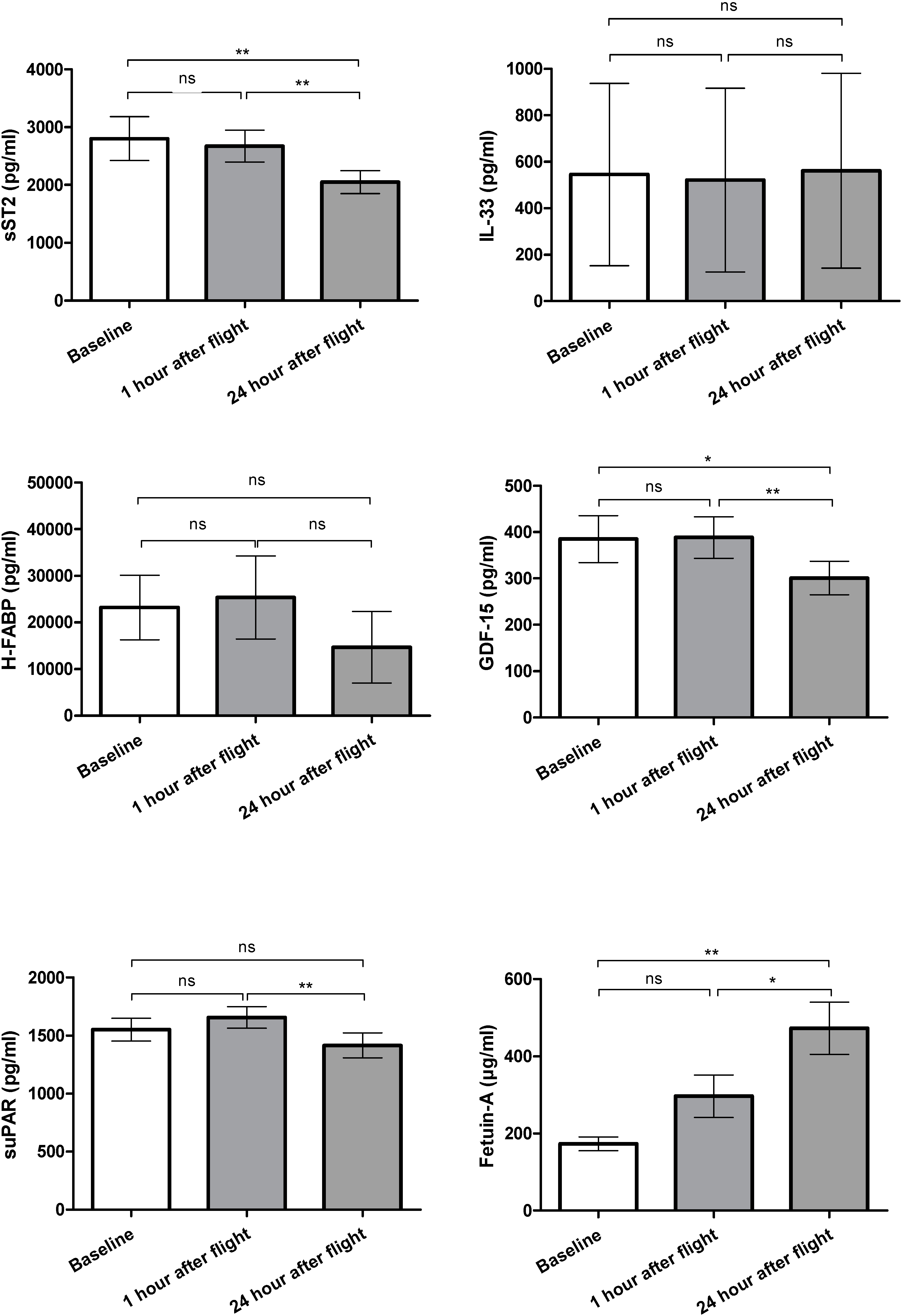 Table 1. Baseline characteristics.
Table 1. Baseline characteristics.
© 2020 by the authors. Licensee MDPI, Basel, Switzerland. This article is an open access article distributed under the terms and conditions of the Creative Commons Attribution (CC BY) license (http://creativecommons.org/licenses/by/4.0/).
We use cookies on our website to ensure you get the best experience. Read more about our cookies here.
Accept
We have just recently launched a new version of our website. Help us to further improve by taking part in this short 5 minute survey here. here.
Never show this again