Claudins in the Renal Collecting Duct
Next Article in Special Issue

B-cell lymphoma-extra large (Bcl-xL) is an anti-apoptotic member of the Bcl2 family of proteins, which supports neurite outgrowth and neurotransmission by improving mitochondrial function. During excitotoxic stimulation, however, Bcl-xL undergoes post-translational cleavage to ∆N-Bcl-xL, and accumulation of ∆N-Bcl-xL causes mitochondrial dysfunction and neuronal death. In this study, we hypothesized that the generation of reactive oxygen species (ROS) during excitotoxicity leads to formation of ∆N-Bcl-xL. We further proposed that the application of an antioxidant with neuroprotective properties such as α-tocotrienol (TCT) will prevent ∆N-Bcl-xL-induced mitochondrial dysfunction via its antioxidant properties. Primary hippocampal neurons were treated with α-TCT, glutamate, or a combination of both. Glutamate challenge significantly increased cytosolic and mitochondrial ROS and ∆N-Bcl-xL levels. ∆N-Bcl-xL accumulation was accompanied by intracellular ATP depletion, loss of mitochondrial membrane potential, and cell death. α-TCT prevented loss of mitochondrial membrane potential in hippocampal neurons overexpressing ∆N-Bcl-xL, suggesting that ∆N-Bcl-xL caused the loss of mitochondrial function under excitotoxic conditions. Our data suggest that production of ROS is an important cause of ∆N-Bcl-xL formation and that preventing ROS production may be an effective strategy to prevent ∆N-Bcl-xL-mediated mitochondrial dysfunction and thus promote neuronal survival. View Full-Text
Keywords: Bcl-xL; ∆N-Bcl-xL; antioxidant; mitochondria; tocotrienol Bcl-xL; ∆N-Bcl-xL; antioxidant; mitochondria; tocotrienol
►▼ Show Figures 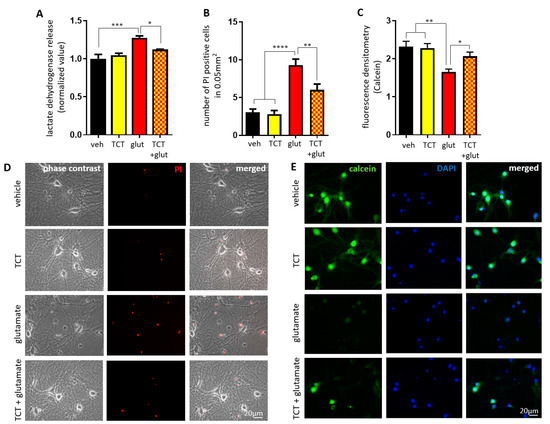