Prolonged caloric intake above energy needs disturbs the body’s ability to store and manage the excess of energy intake, leading to the onset of chronic degenerative diseases. This study aimed to compare the effect of three foods, which contain demonstrated bioactive compounds in the treatment of obesity and as an adjuvant in obesity energy restriction treatments. In a mice obesity model induced through a high-fat diet; fish oil, soluble fibre, and soy were incorporated to evaluate its capacity to modulate metabolic factors in adipose tissue during a continued fat intake or weight reduction through a normocaloric diet. As a result, fish oil improved mitochondrial related, adipose tissue hormone expression, and oxidation products when high-fat diets are consumed; while soluble fibre improved glucose and inflammation pathways during high-fat diet intake. In weight reduction treatments few differential features, as a treatment adjuvant, were observed for fish oil and soy; while soluble fibre was able to improve the weight reduction effects induced by a normocaloric diet. As a conclusion, soluble fibre supplementation compared to an energy reduction program, was the only treatment able to induce a significant additional effect in the improvement of weight loss and adipose tissue metabolism.
Keywords: adipose tissue; fish oil; soluble fibre; soy; mitochondria; metabolism adipose tissue; fish oil; soluble fibre; soy; mitochondria; metabolism

Severe obesity is an increasingly prevalent condition and is often associated with long-term comorbidities, reduced survival, and higher healthcare costs. Although several resources have been invested to treat and prevent obesity, an overall median success rate of 15% is observed in most studies and intervention programs [1,2]. While pharmacological strategies are indicated for patients with high cardiovascular risk, non-pharmacological treatments such as lifestyle interventions (diet, physical exercise, stress management, and others) are indicated for a great majority of people with overweight problems. This fact raises the interest of the health and scientific community to address additional tools to act as adjuvants in the treatment of obesity, some of them based on food technological modifications to induce satiety, while others through the addition of food bioactive compounds that may improve insulin signaling pathways, the regulation of adiposity, energy expenditure, and/or energy bioavailability [3].
Several studies indicate that fish oil and omega-3 polyunsaturated fatty acids supplements may help to prevent cardiovascular and metabolic diseases due to their anti-inflammatory properties. However, meta-analysis of clinical controlled trials does not show any improvement in body weight and lean body mass [4], while others have observed an improvement in blood lipid and metabolic parameters without significant changes in anthropometric parameters [5]. On the other hand, soy has been widely studied due to the quality of its protein and high isoflavone content. Lipogenesis inhibition and increased fatty acid β-oxidation, which lead to the reduction of body fat depots, are mechanisms of isoflavones action against obesity [6]. In this regard, significant effects in anthropometric parameters have been observed in low doses and during a short period of supplementation (two to six months); but adverse effects have been observed in overweight and obesity populations [7]. Lastly, fibre, especially soluble fibre, is widely recommended as an anti-obesity agent due to its ability to interfere with gut lipid absorption, satiety and satiation effect, and gut microbiota composition and activity modulation through short-chain fatty acids production between others [8].
Notwithstanding the above, the main problem during the development of obesity and its further co-morbidities is the body’s inability to manage energy overload, generally known as lipotoxicity [9]. Mitochondrial dysfunction in adipocytes possibly induced by lipotoxicity results in detrimental effects on its differentiation, lipid metabolism, insulin sensitivity, and oxidative capacity between others and has been reported to have a strong correlation with metabolic diseases, including obesity, type 2 diabetes and other metabolic diseases [10]. In this context, adipose tissue “healthy” metabolism is a key feature for the success of weight reduction in patients with morbid obesity after bariatric surgery [11]. Nonetheless, the main problem in this context is how to improve the metabolic capacity of adipose tissue of people with obesity that shows an unbalanced metabolism. Therefore, the main objective of this study was to determine the possible adjuvant effect in the adipose tissue metabolic profile during weight reduction-treatments of three recognized dietary treatments: Fish oil, soluble fibre, and soy; in adipose tissue metabolism after the onset of obesity. A mice obesity model was employed where transcriptomic and oxidative markers analyses were employed to determine changes in adipose tissue metabolism induced by the selected dietary treatments.

Three-week-old male CD1 Swiss (initial weight 22.1 ± 1.9) mice obtained from Harlan Laboratories (Catalunya, Spain) were maintained at 23 ± 2 °C under a 12:12 h light-dark cycle (lights on from 07:00 to 19:00). All mice were allowed unlimited access to in-house produced high-fat (Experimental and high-fat control group n = 48) or normocaloric diet (Control group n = 6) for four months. After that period, 24 animals that were fed with a high-fat diet were randomly assigned to a normocaloric diet (weight reduction control group n = 6) and a normocaloric diet + dietary bioactive compounds mainly fish oil (Sigma-Aldrich, F8020 Lot#051M1861V, St-Louis, MO, USA), soy (Vivesoy, Grupo Leche Pascual, Aranda del Duero, Spain), and soluble fibre from psyllium plantago (Laboratorios Normon S.A., Madrid, Spain) (n = 6 for each experimental group) for two months. The other half of the animals continued to be exposed to a high-fat diet (High-fat control group n = 6) and high-fat diet + dietary bioactive compounds mainly fish oil, soy, and soluble fibre (n = 6 for each experimental group) for two months. Sample size was estimated with an accepted risk of 0.05 and an estimated power of 90%. It was considered that the treatment would be effective if it induces a reduction of 6.5 g of body weight in the following two months of treatments; and a standard deviation of body weight of 3.6 g was used for sample calculation (estimated n = 5.25). The scheme of the experimental procedure is described in Supplementary Figure S2, and the dietary and nutritional composition of experimental diets are described in Supplementary Table S1. Body weight, food and beverage intake were measured weekly throughout the study. At the end of the experimental period, subcutaneous glucose and insulin tolerance tests were performed (see below). Further, all animals were sacrificed and epididymal fat pad (visceral adipose tissue) was collected, frozen in liquid nitrogen, and stored at –80 °C. All animal procedures followed the approved protocols from the Institutional Animal Care and Use Committee and by the Ethics Committee of the University of Lleida (Approval number: CEEA 18-01/12; date: 2/2/2012).

Mice were fasted for 12 or 2 h and then injected subcutaneously with glucose (2 g/kg body weight) or insulin (0.5 U/kg body weight, Sigma I0516 from bovine pancreas), respectively, with a rest period of five days between both tests. Blood samples were taken every 20 min (0–120 min) from the tail vein and blood glucose levels were determined with a portable glucometer (Roche Accu-Chek Aviva, CAT/TYP 05911982002, Mannheim, Germany). The area under the curve was calculated as the sum of trapezoids in both tests.

Glutamic semialdehydes (GSA), glycoxidation (carboxyethyl-lysine (CEL) and carboxymethyl-lysine (CML)), lipoxidation (Malondialdehyde-lysine, MDAL) and 2-succinocystein (2SC) were determined by GC/MS as trifluoroacetic acid methyl esters derivatives in acid-hydrolyzed delipidated and reduced protein samples using a HP6890 Series II gas chromatograph (Agilent, Barcelona, Spain) with a MSD5973A Series and a 7683 Series automatic injector with a Rtx-5MS Restek column (30 m × 0.25 mm × 0.25 μm). Quantification was performed by internal and external standardization using standard curves constructed from mixtures of deuterated and non-deuterated standards. Analyses were carried out by selected ion monitoring GC/MS (SIM-GC/MS). The ions used were: Lysine and [2H8]lysine, m/z 180 and 187, respectively; 5-hydroxy-2-aminovaleric acid and [2H5]5-hydroxy-2-aminovaleric acid (stable derivatives of GSA), CML and [2H4]CML, m/z 392 and 396, respectively; CEL and [2H4]CEL, m/z 379 and 383, respectively, MDAL and d8-MDAL, m/z 474 and 482, respectively; and 2SC and d2-2SC, m/z 284 and 286. The amounts of products are expressed as the μmolar ratio of GSA, CML, CEL, MDAL, and 2SC per mol of lysine.

Antioxidant capacity was measured by the Ferric Reducing Antioxidant Power (FRAP) method. Briefly, 900 μL of the FRAP reagent, containing, 2,4,6-Tris(2-pyridyl)-s-triazine, FeCl3, and acetate buffer, was mixed with 90 μL of distilled water and 30 μL of the test sample or the blank (solvents used for homogenization). Maximum absorbance values taken at 595 nm were taken every 15 s at 37 °C. The readings at 30 min were selected for calculations of FRAP values. Solutions of known Trolox (Sigma-Aldrich, 238813, USA) concentration were used for antioxidant capacity equivalents.

Data is presented as the mean ± standard deviation. Analysis of Gaussian distribution of all variables was performed by D’Agostino–Pearson omnibus normality test. The statistical significance comparison of variables with normal Gaussian distribution was calculated by one-way ANOVA. Multiple comparisons were performed comparing the mean of each group with the mean of the control normocaloric and correction for multiple comparisons was performed with Dunnett test. Non-normal Gaussian distribution was analysed by Kruskall–Wallis test with Dunn’s as a post-hoc test. In both cases, p-values below 0.05 in all statistical tests employed were considered as statistically significant. Partial least square-discriminant analysis (PLS-DA) was performed with transcriptomic and oxidative stress data to determine main differences between groups. Data was normalized by auto-scaling (mean-centred and divided by the standard deviation of each variable) for the PLS-DA analysis. Random forrest out-of-bag error (OOB) was performed to determine the probability that the variables employed in the PLS-DA analysis may discriminate the belonging of each animal to each group. Variable importance in projection (VIP scores) determined by the weight of the sum of squares of PLS loadings; was used to classify the main variables that contributed to the differences between groups. GraphPad Prism (version 5.0) and MetaboAnalyst (version 3.0) were used for statistical analysis and graph plotting. 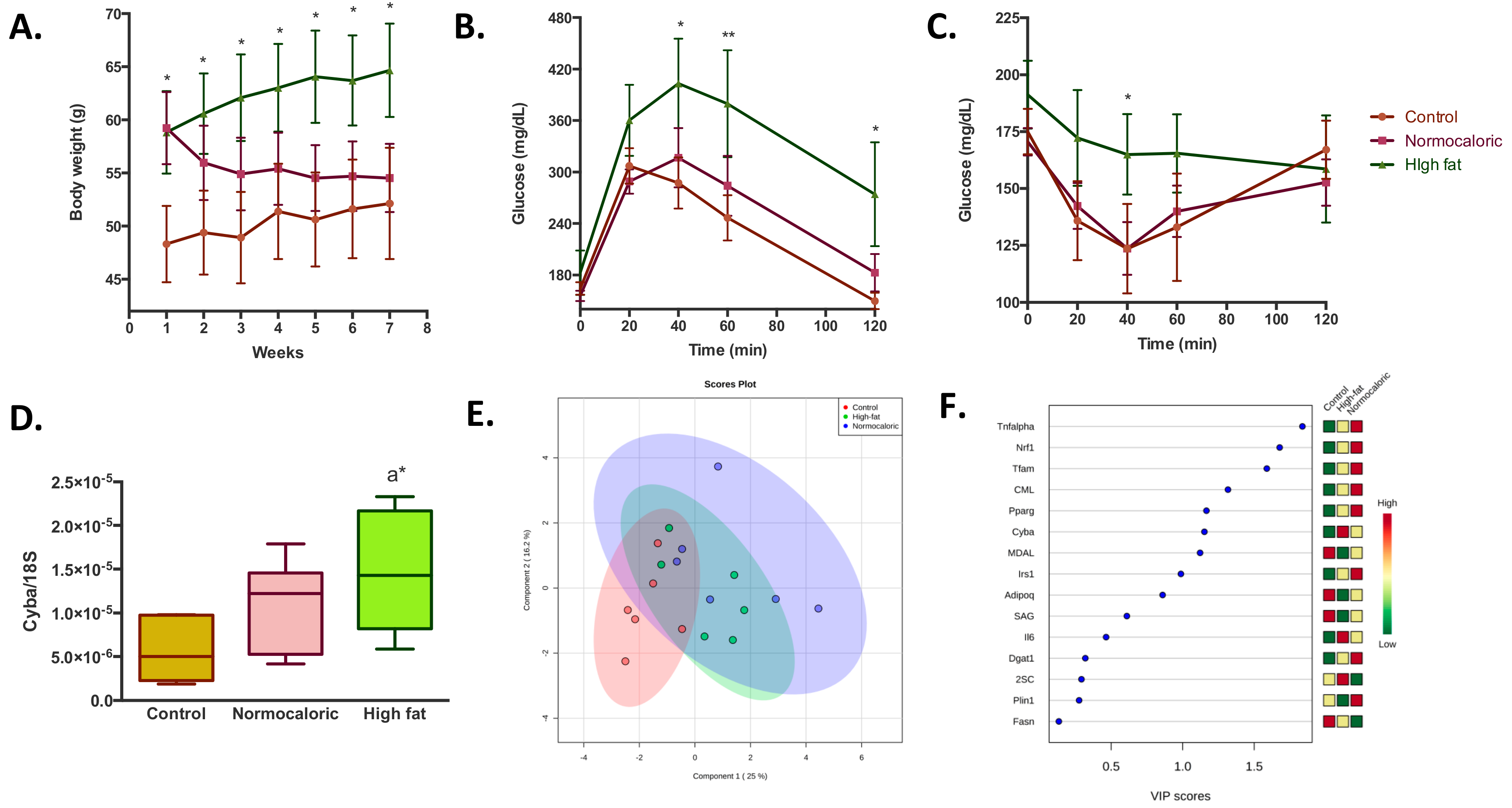 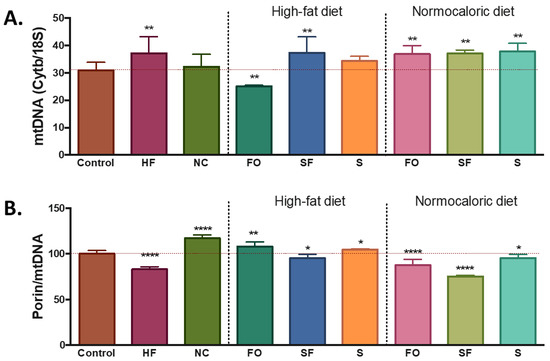 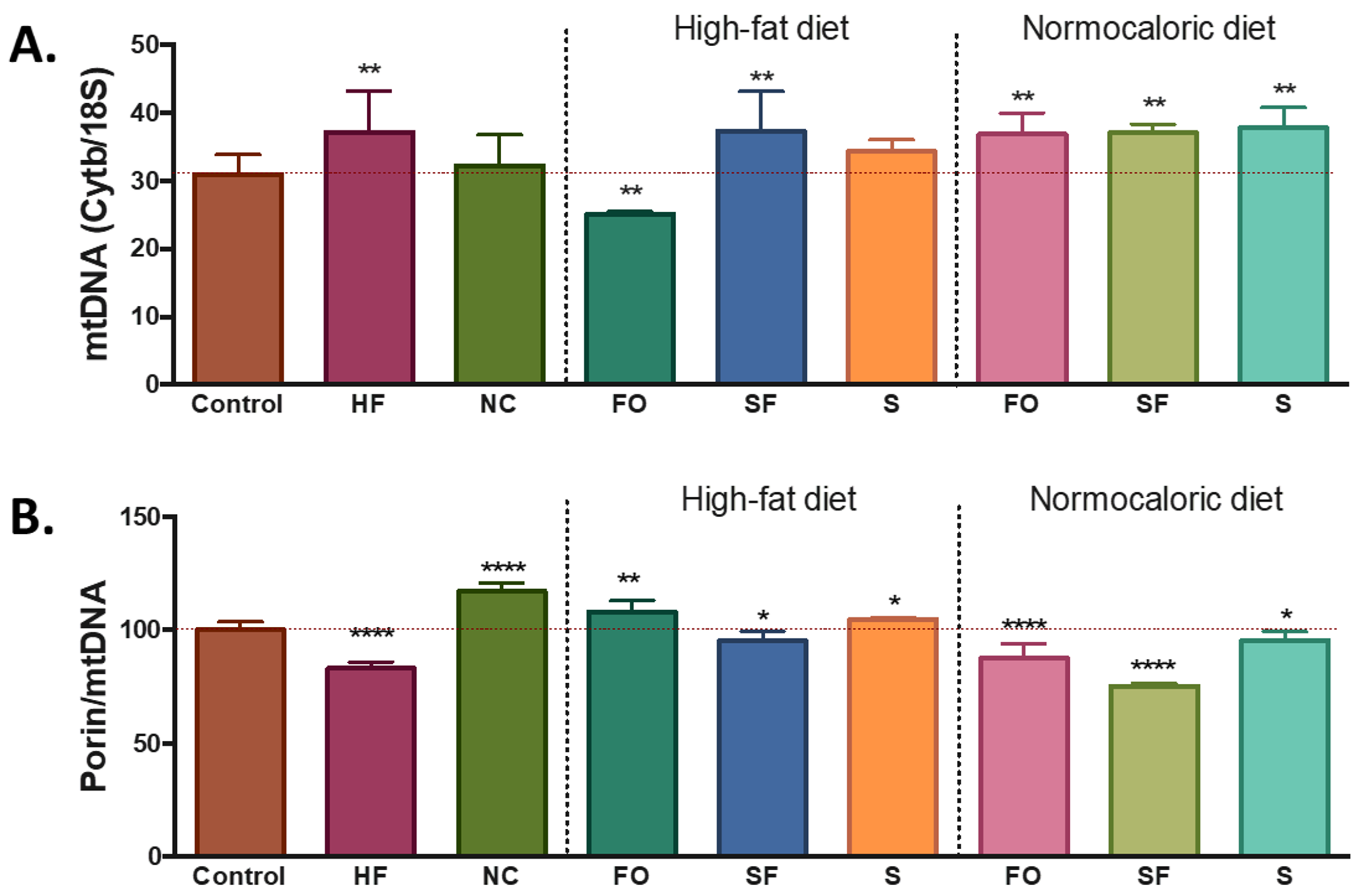 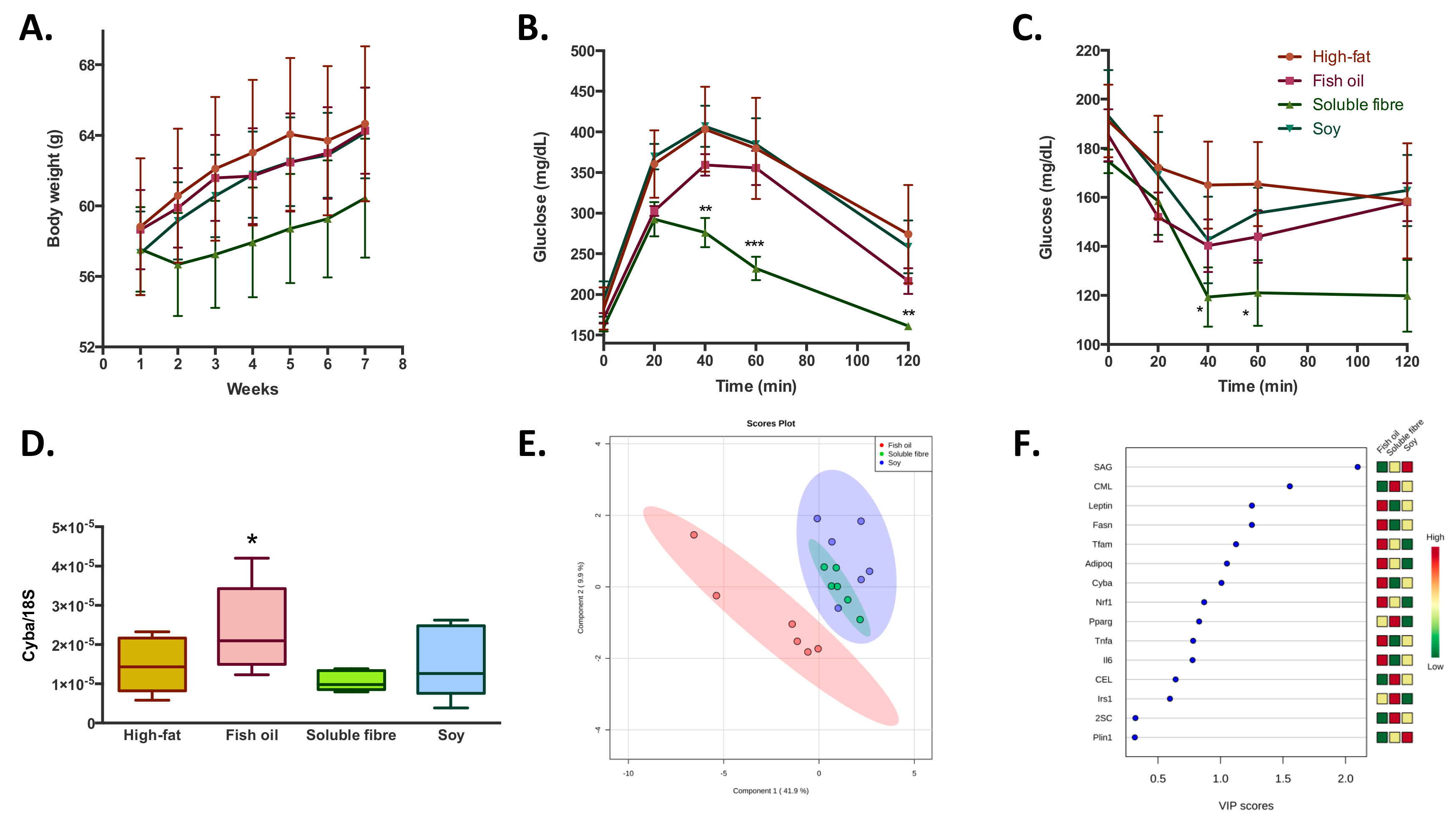 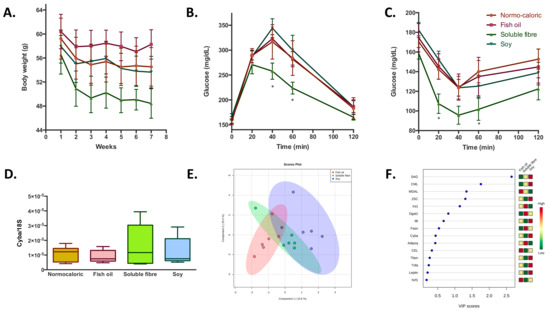 Table 1. Dietary and blood biochemical parameters.
Table 1. Dietary and blood biochemical parameters.
Values are reported as the mean ± standard deviation. Differences between groups were determined by one-way ANOVA and multiple comparisons were performed comparing the mean of each group with the mean of the control normocaloric (a), control high-fat (b) and treatment normocaloric (c) diets. Correction for multiple comparisons was performed with Dunnett test and p-values below 0.05 (marked in bold) were considered as a significant difference between groups (* p < 0.05, ** p < 0.01, and **** p < 0.0001).

Table 2. Adipose tissue oxidative stress biomarkers.
Table 2. Adipose tissue oxidative stress biomarkers.
Values (µmol/mol of lysine) are reported as the mean ± standard deviation. Differences between groups were determined by one-way ANOVA and multiple comparisons were performed comparing the mean of each group with the mean of the control normocaloric (a), control high-fat (b) and treatment normocaloric (c) diets. Correction for multiple comparisons was performed with Dunnett test and p-values below 0.05 (marked in bold) were considered as a significant difference between groups (* p < 0.05, ** p < 0.01, *** p < 0.001, and **** p < 0.0001).
© 2019 by the authors. Licensee MDPI, Basel, Switzerland. This article is an open access article distributed under the terms and conditions of the Creative Commons Attribution (CC BY) license (http://creativecommons.org/licenses/by/4.0/).
We use cookies on our website to ensure you get the best experience. Read more about our cookies here.
Accept
We have just recently launched a new version of our website. Help us to further improve by taking part in this short 5 minute survey here. here.
Never show this again