Different Forms of TFF2, A Lectin of the Human Gastric Mucus Barrier: In Vitro Binding Studies

Trefoil factor family 2 (TFF2) and the mucin MUC6 are co-secreted from human gastric and duodenal glands. TFF2 binds MUC6 as a lectin and is a constituent of the gastric mucus. Herein, we investigated human gastric extracts by FPLC and identified mainly high- but also low-molecular-mass forms of TFF2. From the high-molecular-mass forms, TFF2 can be completely released by boiling in SDS or by harsh denaturing extraction. The low-molecular-mass form representing monomeric TFF2 can be washed out in part from gastric mucosa specimens with buffer. Overlay assays with radioactively labeled TFF2 revealed binding to the mucin MUC6 and not MUC5AC. This binding is modulated by Ca2+ and can be blocked by the lectin GSA-II and the monoclonal antibody HIK1083. TFF2 binding was also inhibited by Me-β-Gal, but not the α anomer. Thus, both the α1,4GlcNAc as well as the juxtaperipheral β-galactoside residues of the characteristic GlcNAcα1→4Galβ1→R moiety of human MUC6 are essential for TFF2 binding. Furthermore, there are major differences in the TFF2 binding characteristics when human is compared with the porcine system. Taken together, TFF2 appears to fulfill an important role in stabilizing the inner insoluble gastric mucus barrier layer, particularly by its binding to the mucin MUC6. View Full-Text
Keywords: glycoproteins; H. pylori; lectin; mucin; peptides glycoproteins; H. pylori; lectin; mucin; peptides
►▼ Show Figures 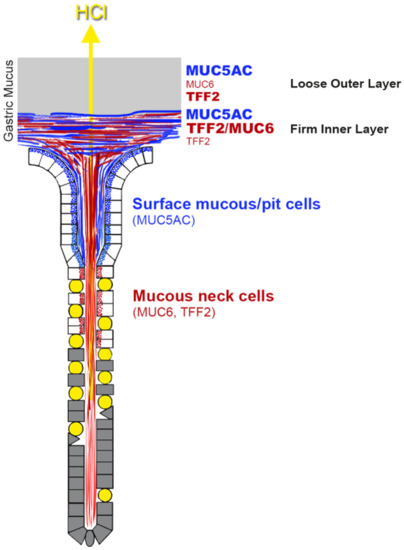