Insights into the Pathophysiology of Infertility in Females with Classical Galactosaemia

The SGLT2 Inhibitor Canagliflozin Prevents Carcinogenesis in a Mouse Model of Diabetes and Non-Alcoholic Steatohepatitis-Related Hepatocarcinogenesis: Association with SGLT2 Expression in Hepatocellular Carcinoma

Hepatocellular carcinoma (HCC) is the sixth most common cancer overall and the third leading cause of cancer-related death worldwide [1]. Non-alcoholic steatohepatitis (NASH) is characterized by hepatocellular accumulation of lipids (steatosis), lobular inflammation, hepatocellular ballooning, and fibrosis [2]. NASH is associated with an increased risk of cirrhosis and HCC [3], and has emerged as a major risk factor for HCC. Patients with type 2 diabetes are susceptible to developing severe NASH, and also have a higher risk of NASH progressing to cirrhosis and/or HCC when compared with non-diabetic persons [4].
Several studies have examined the impact of sodium-glucose co-transporter 2 (SGLT2) inhibitors on the occurrence of non-alcoholic fatty liver disease (NAFLD) and/or NASH in rodent models and humans [5,6,7,8,9]. We previously reported that the SGLT2 inhibitor empagliflozin showed anti-steatotic and anti-inflammatory effects [5], which suppressed the development of NASH in a mouse model of diabetes and NASH/cirrhosis/HCC (the STAM mouse) [10]. This mouse model progresses from diabetes with NAFLD to NASH by eight weeks of age and HCC develops at 16 weeks [10]. We recently reported that the SGLT2 inhibitor dapagliflozin improves hepatic steatosis in patients with type 2 diabetes and NAFLD, and attenuates liver fibrosis in patients with significant fibrosis [11], suggesting that SGLT2 inhibitors have an anti-fibrotic effect on human NASH. It is therefore possible that SGLT2 inhibitors could prevent NASH-related hepatocarcinogenesis in the setting of diabetes combined with NAFLD. However, no studies have examined whether SGLT2 inhibitors can prevent the progression of NASH to hepatocarcinogenesis.
Canagliflozin is an orally administered SGLT2 inhibitor used in the treatment of patients with type 2 diabetes. By inhibiting the transporter protein SGLT2 in the kidneys, canagliflozin reduces renal glucose reabsorption, thereby increasing urinary glucose excretion and reducing blood glucose levels [12]. A previous study has demonstrated that canagliflozin lowers the renal threshold for glucose excretion, increases urinary glucose excretion, reduces body weight, increases fatty acid oxidation, and reduces de novo lipogenesis in rodent models of type 2 diabetes [13].
Accordingly, we investigated the effect of the SGLT2 inhibitor canagliflozin on steatohepatitis and NASH-related hepatocarcinogenesis in the STAM mouse model of diabetes and NASH/cirrhosis/HCC. We also evaluated the in vitro effect of canagliflozin on the proliferation of an HCC cell line (HepG2 cells) and the mechanisms involved.

2.1. Effect of Canagliflozin on the NAFLD Histological Activity Score (NAS) and Hepatic Fibrosis

2.2.2. Effect of Canagliflozin on Hepatic Fibrosis

We next investigated whether canagliflozin prevented the progression of hepatic fibrosis, which is the advanced stage of NASH. First, liver fibrosis was assessed by Sirius red staining (Figure 3a), revealing that the area of collagen deposition was significantly smaller in the early canagliflozin group relative to the vehicle group (Figure 3b). In addition, expression of type 3 collagen mRNA was significantly lower in the early canagliflozin group than in the vehicle group (Figure 3c).

At 16 weeks, liver tumors were found in some of the STAM mice from each group (Figure 4a). There were significantly fewer tumors in the continuous canagliflozin group than in the vehicle group (Figure 4b), although there was no significant difference of tumor size among the three groups (Figure 4c). Examination of H-E-stained liver sections showed that the liver tumors were the foci of abnormal cells with basophilic cytoplasm and hyperchromic nuclei, suggesting the development of HCC (Figure 4d).

2.2.5. Hepatic and Tumor SGLT1/SGLT2 Expression in the Vehicle Group at Eight and 16 Weeks

2.3. Effects of Canagliflozin on Real-Time Proliferation of HepG2 Cells Evaluated by the xCELLigence DP System

Effects of Canagliflozin on Cell Cycle-Related Proteins and Apoptosis

4.1. Animal Model and Induction of NASH

The mouse model of NASH (STAM mouse) was generated according to the protocol of Fujii et al. [10]. Pathogen free 14-day pregnant C57BL/6 mice were purchased from CLEA Japan (Tokyo, Japan). Male pups (two days old) received a subcutaneous injection of a low dose of streptozotocin (200 μg) and then were fed a high-fat diet (HFD32; CLEA-Japan, Tokyo, Japan) ad libitum from four weeks after birth. This mouse model progresses from NAFLD to NASH by eight weeks of age, hepatic fibrosis by 12 weeks, and HCC (tumor protrusion) develops at 16 weeks [10]. Canagliflozin was provided by Mitsubishi Tanabe Pharma Corporation (Osaka, Japan). The dose of canagliflozin was set at 30 mg/kg in all experiments because it has been shown to be an effective pharmacological dose in animal studies [26]. All experiments were approved by the animal care and use committee of Dokkyo Medical University (SLMN 034-1603-3). All animal methods were performed in accordance with the relevant guidelines and regulations prepared by the National Academy of Sciences and published by the National Institute of Health.

We investigated whether canagliflozin could prevent the progression of NAFLD to NASH. As shown in Figure 1, mice aged five weeks were divided into two groups (a vehicle group and a canagliflozin group). All animals were provided with food and water ad libitum, with canagliflozin being administered at 30 mg/kg once daily by oral gavage for three weeks in the canagliflozin group. At the end of the study period, the mice were sacrificed for the collection of liver tissue samples and blood was obtained via cardiac puncture at the time of death. Blood samples were centrifuged and serum was stored at −80 °C until analysis. The fasting blood glucose level (16 h fast) was measured with a Glutest Neo Sensor (Sanwa Chemical, Shizuoka, Japan). Serum levels of alanine aminotransferase (ALT), triglycerides (TG), and glycated albumin (GA) were measured with an automated analyzer (JEOL Ltd., Tokyo, Japan). Serum insulin was measured with an enzyme immunoassay (Shibayagi Co., Shibukawa, Japan).

We also investigated the inhibitory effect of canagliflozin on HCC in this diabetes/NASH/HCC model. As shown in Figure 1, mice aged five weeks were divided into three groups of nine animals each: the vehicle group, the early canagliflozin group (receiving canagliflozin at 30 mg/kg daily from weeks five to 9), and the continuous canagliflozin group (receiving canagliflozin at 30 mg/kg daily from weeks five to 16). All animals were provided with food and water ad libitum, with canagliflozin being administered at 30 mg/kg once daily by oral gavage in the canagliflozin groups. At 16 weeks, the mice were sacrificed for collection of liver tissue samples and blood was obtained via cardiac puncture at the time of death. Blood samples were centrifuged and serum was stored at −80 °C until analysis.
Samples from the left lobe of the liver were embedded in tissue Tek O.C.T. compound (Sakura Finetek, Tokyo, Japan), snap frozen in liquid nitrogen, and stored at −80 °C. Sections were cut (5 μm), dried in air, and fixed in acetone. For hematoxylin and eosin (H-E) staining, liver sections were prefixed in Bouin’s solution and then stained with Lillie–Mayer hematoxylin (Muto Pure Chemicals, Tokyo, Japan). Based on observation of the H-E-stained sections, the NAFLD histological activity score (NAS) was calculated from the severity of steatosis, lobular inflammation, and hepatocyte ballooning according to the criteria of Kleiner et al. [27].
To assess fibrosis, liver sections were stained with Sirius red, and the Sirius red-positive areas in five non-overlapping fields were measured with DP manager/controller and WIN Roof Ver.5.8.1 software (Mitani Co., Tokyo, Japan).
Immunohistochemical staining was performed with anti-glutamine synthetase (GS) antibody (Chemicon International, Temeculla, CA, USA), anti-SGLT1 antibody (Abcam, Cambridge Science Park, Cambridge, UK), and anti-SGLT2 antibody (Santa Cruz Biotechnology, Texas, USA). For quantitative analysis of the anti-GS-positive area, bright images of the region around the central vein were captured at 200x magnification using a digital camera (BX53 Olympus Japan, Tokyo, Japan). Then, the anti-GS-positive areas in three to five non-overlapping fields were measured with DP manager/controller and WIN Roof Ver.5.8.1 software.

The xCELLigence DP system was used for real-time assessment of cell proliferation, migration, invasion, and viability as previously described [28]. This system employs special single-use culture plates with gold electrode arrays covering 80% of the 5.0-mm area at the bottom of each individual well. An increase of cellular contact with the electrodes increases impedance across the array, and impedance can be measured by the DP system in arbitrary cell index units (E-plates) to assess cell growth and viability. HepG2 cells (8 × 104) were added to each well and allowed to settle for 30 min before any treatment. Then, the cells were incubated with 100 nM canagliflozin (TA-7284; Mitsubishi Tanabe Pharma Corporation, Saitama, Japan), 1 μM canagliflozin, or 10 μM canagliflozin and the cell index was measured every 15 min for six days (144 h).
Canagliflozin inhibited glucose transport by the cells at a concentration of 10 μM, which corresponds to the serum concentration at clinical doses [13].

To synchronize the cell cycle, HepG2 cells were subjected to serum deprivation for 6 h before treatment with canagliflozin and then resupplied with serum. The cells were subsequently incubated with 10 μM canagliflozin for 24 h and harvested by trypsinization, after which 1 × 106 cells were stained with 100 μg/mL propidium iodide in the dark at 4 °C. The fraction of cells in each phase of the cell cycle (G0/G1, S, and G2/M) was determined by flow cytometry using a BD FACStar with ModiFit software (Becton Dickinson Japan, Tokyo, Japan). A canagliflozin concentration of 10 μM corresponds to the serum concentration at a clinically effective dose [13].

Results are presented as the mean ± standard deviation or as the median and interquartile range. Differences between groups were analyzed by the unpaired t-test for parametric data or with the Mann–Whitney U test for nonparametric data. Cell cycle data were analyzed by repeated ANOVA (parametric) or the Kruskal–Wallis test (nonparametric). Differences of prevalence between groups were assessed by the chi-square test. In all analyses, a p value < 0.05 was accepted as indicating statistical significance.

This study was funded by Mitsubishi Tanabe Pharma Corporation. 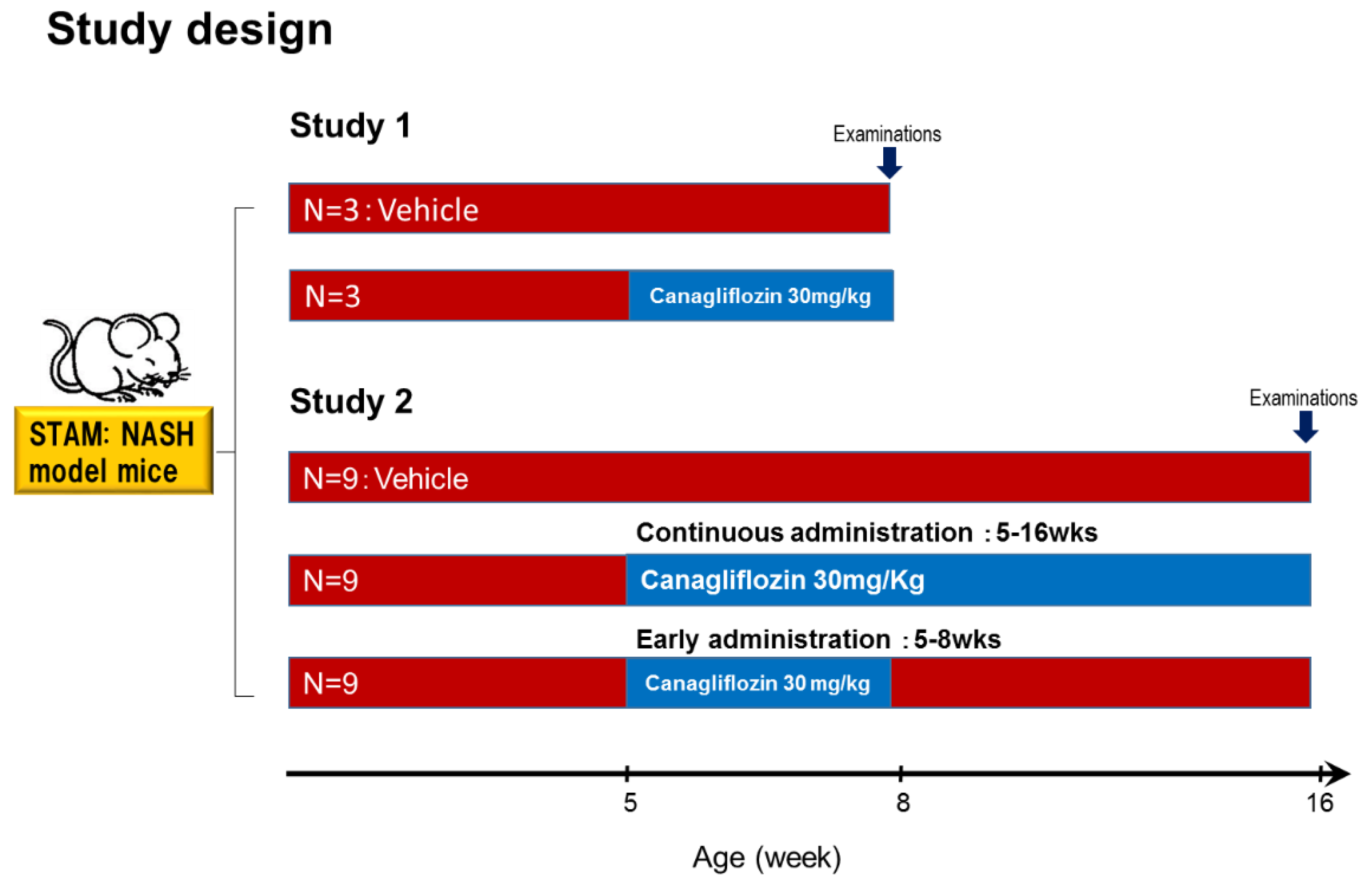 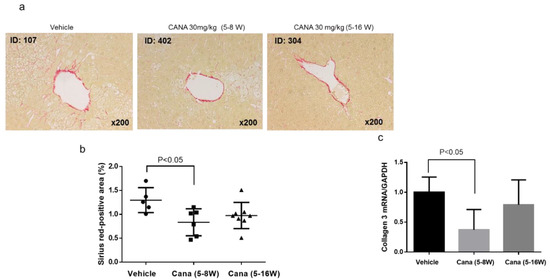 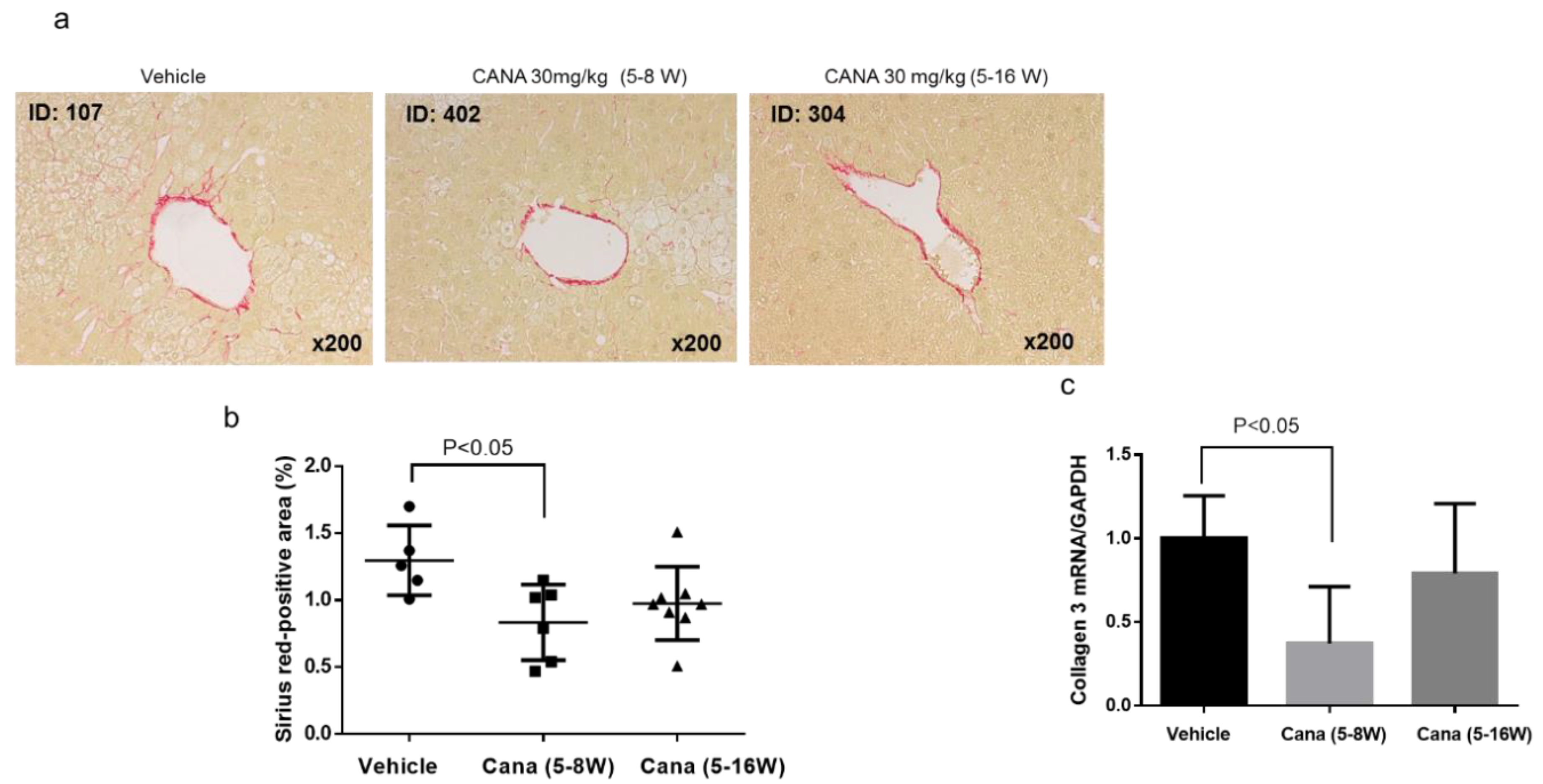 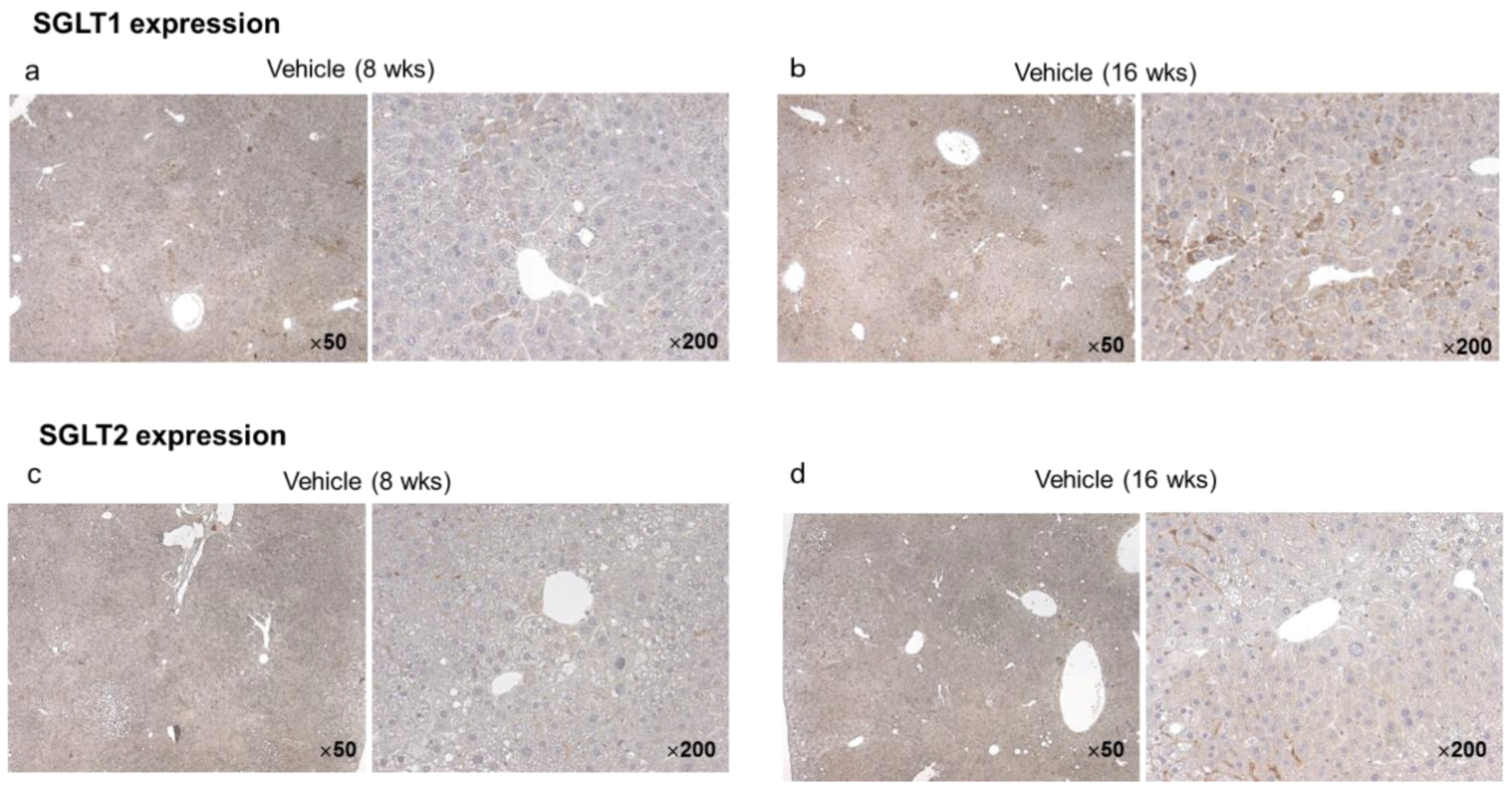 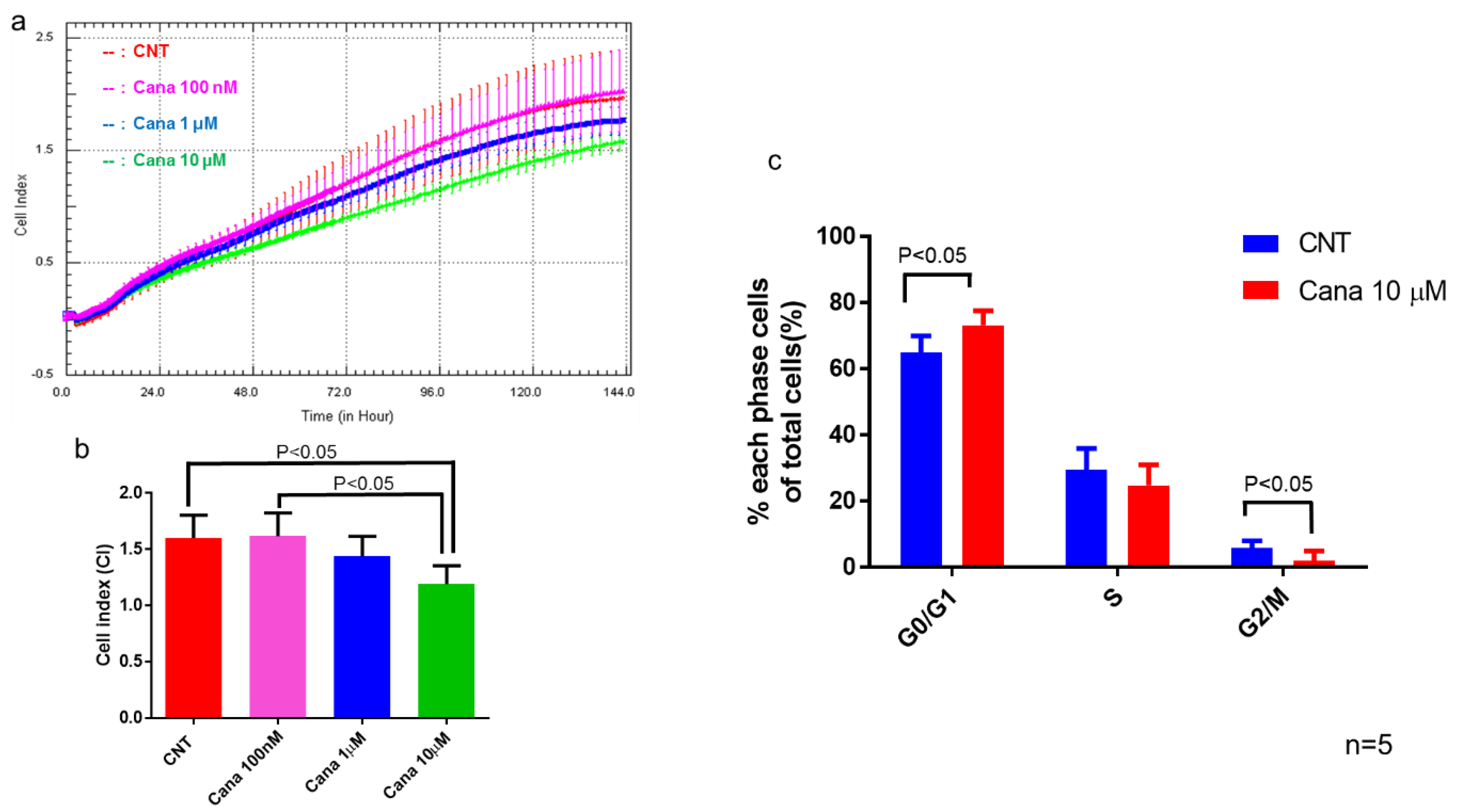 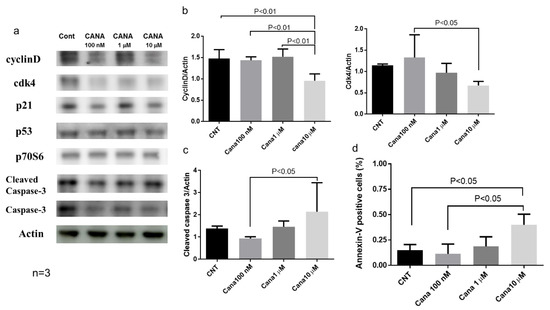 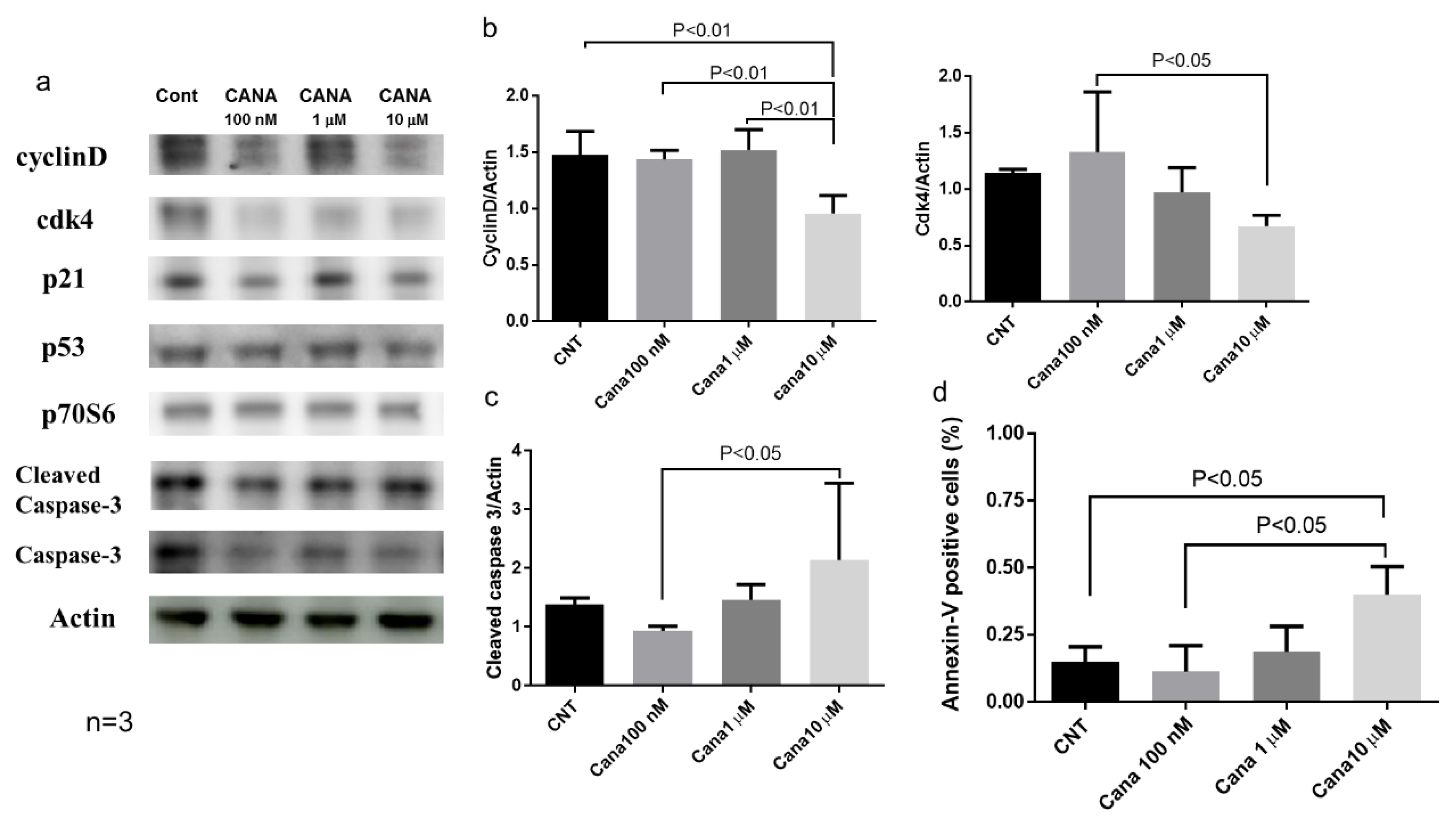 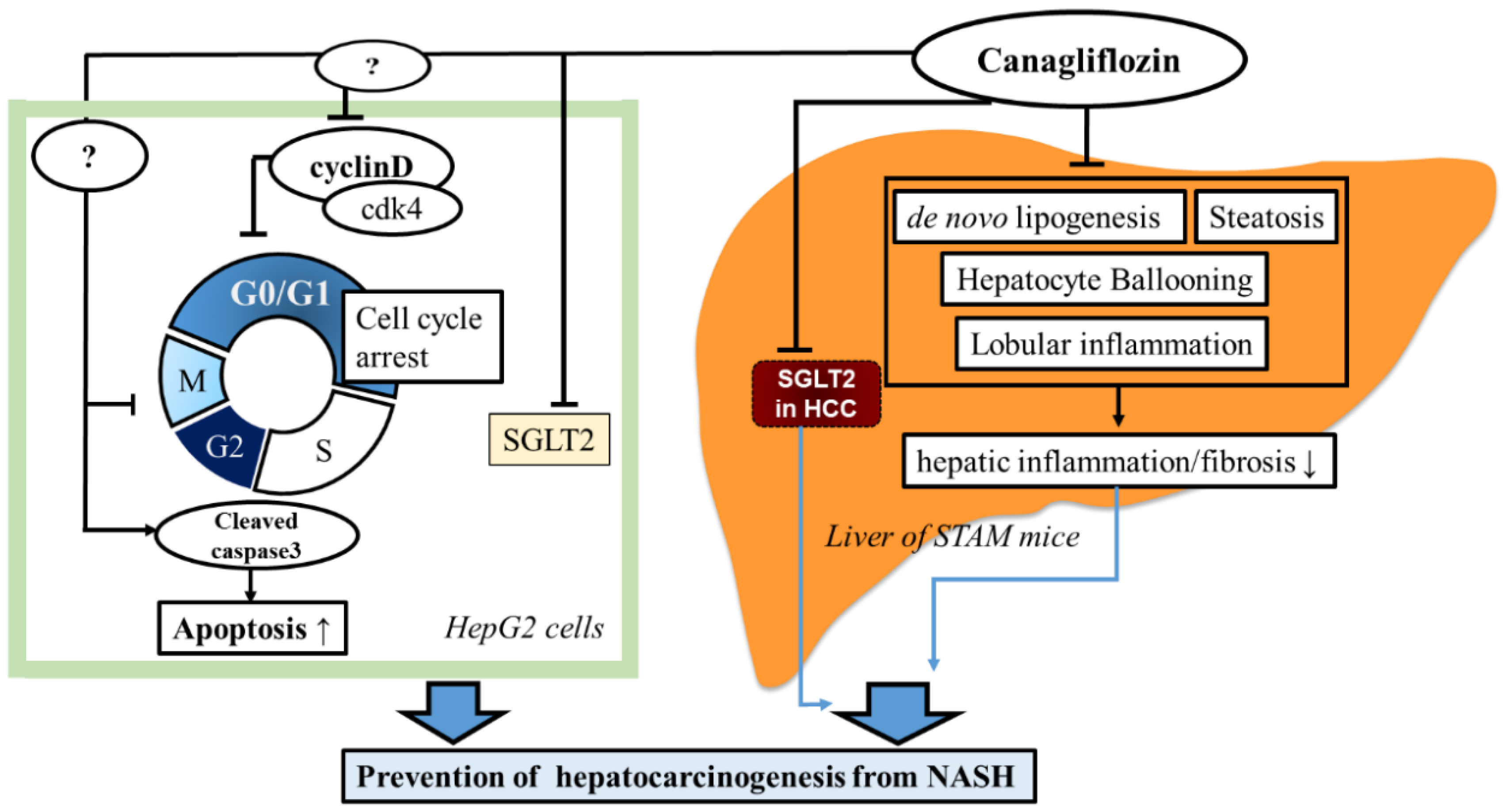