Can Nrf2 Modulate the Development of Intestinal Fibrosis and Cancer in Inflammatory Bowel Disease?

One of the main mechanisms carried out by the cells to counteract several forms of stress is the activation of the nuclear factor erythroid 2-related factor (Nrf2) signaling. Nrf2 signaling controls the expression of many genes through the binding of a specific cis-acting element known as the antioxidant response element (ARE). Activation of Nrf2/ARE signaling can mitigate several pathologic mechanisms associated with an autoimmune response, digestive and metabolic disorders, as well as respiratory, cardiovascular, and neurodegenerative diseases. Indeed, several studies have demonstrated that Nrf2 pathway plays a key role in inflammation and in cancer development in many organs, including the intestine. Nrf2 appears to be involved in inflammatory bowel disease (IBD), an immune-mediated chronic and disabling disease, with a high risk of developing intestinal fibrotic strictures and cancer. Currently, drugs able to increase cytoprotective Nrf2 function are in clinical trials or already being used in clinical practice to reduce the progression of some degenerative conditions. The role of Nrf2 in cancer development and progression is controversial, and drugs able to inhibit abnormal levels of Nrf2 are also under investigation. The goal of this review is to analyze and discuss Nrf2-dependent signals in the initiation and progression of intestinal fibrosis and cancers occurring in IBD. View Full-Text
Keywords: inflammatory bowel disease; IBD; fibrosis; intestinal fibrosis; cancer; colorectal cancer; Nrf2 inflammatory bowel disease; IBD; fibrosis; intestinal fibrosis; cancer; colorectal cancer; Nrf2
►▼ Show Figures 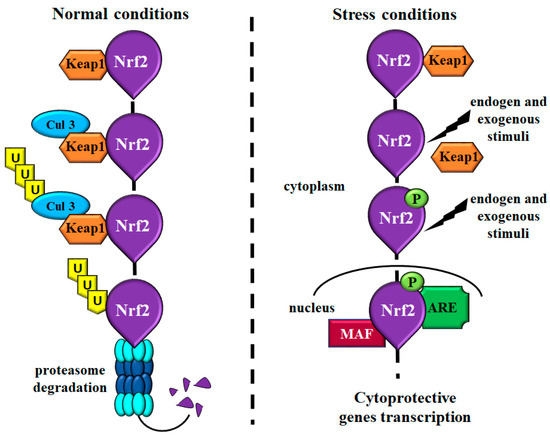