From Implantation to Birth: Insight into Molecular Melatonin Functions
Previous Article in Journal

Melatonin exhibits extraordinary diversity in terms of its functions and distribution. When discovered, it was thought to be uniquely of pineal gland origin. Subsequently, melatonin synthesis was identified in a variety of organs and recently it was shown to be produced in the mitochondria. Since mitochondria exist in every cell, with a few exceptions, it means that every vertebrate, invertebrate, and plant cell produces melatonin. The mitochondrial synthesis of melatonin is not photoperiod-dependent, but it may be inducible under conditions of stress. Mitochondria-produced melatonin is not released into the systemic circulation, but rather is used primarily in its cell of origin. Melatonin’s functions in the mitochondria are highly diverse, not unlike those of sirtuin 3 (SIRT3). SIRT3 is an NAD+-dependent deacetylase which regulates, among many functions, the redox state of the mitochondria. Recent data proves that melatonin and SIRT3 post-translationally collaborate in regulating free radical generation and removal from mitochondria. Since melatonin and SIRT3 have cohabitated in the mitochondria for many eons, we predict that these molecules interact in many other ways to control mitochondrial physiology. It is predicted that these mutual functions will be intensely investigated in the next decade and importantly, we assume that the findings will have significant applications for preventing/delaying some age-related diseases and aging itself. View Full-Text
Keywords: reactive oxygen species; oxidative stress; molecular pathways; sirtuins; antioxidant enzymes; oxidative phosphorylation reactive oxygen species; oxidative stress; molecular pathways; sirtuins; antioxidant enzymes; oxidative phosphorylation
►▼ Show Figures 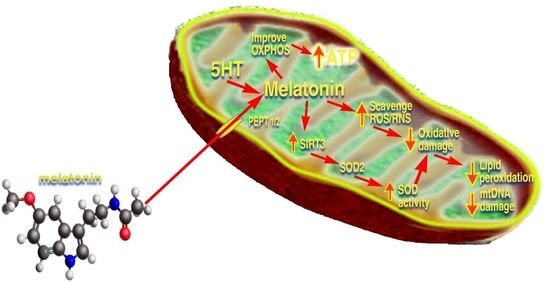