Vitamin D and Influenza—Prevention or Therapy?
Previous Article in Journal

Vitamin D in Neurological Diseases: A Rationale for a Pathogenic Impact

Over the past two decades it has been increasingly recognized that vitamin D, aside from its crucial involvement in calcium and phosphate homeostasis and the dynamics of the musculoskeletal system, exerts its influential impact on the immune system. The mechanistic roles that vitamin D plays regarding immune activation for combating infection, as well as pathologically and mediating autoimmune conditions, have been progressively unraveled. In vitro and in vivo models have demonstrated that the action of vitamin D on various immunocytes is not unidirectional. Rather, how vitamin D affects immunocyte functions depends on the context of the immune response, in the way that its suppressive or stimulatory action offers physiologically appropriate and immunologically advantageous outcomes. In this review, the relationship between various aspects of vitamin D, starting from its adequacy in circulation to its immunological functions, as well as its autoimmune conditions, in particular systemic lupus erythematosus (SLE), a prototype autoimmune condition characterized by immune-complex mediated inflammation, will be discussed. Concurring with other groups of investigators, our group found that vitamin D deficiency is highly prevalent in patients with SLE. Furthermore, the circulating vitamin D levels appear to be correlated with a higher disease activity of SLE as well as extra-musculoskeletal complications of SLE such as fatigue, cardiovascular risk, and cognitive impairment. View Full-Text
Keywords: lupus; systemic lupus erythematosus; vitamin D; disease damage; disease activity lupus; systemic lupus erythematosus; vitamin D; disease damage; disease activity
►▼ Show Figures 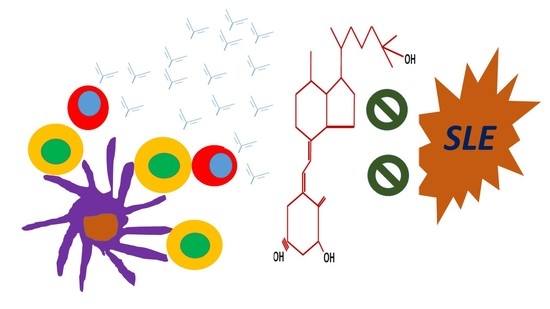 
Mak A. The Impact of Vitamin D on the Immunopathophysiology, Disease Activity, and Extra-Musculoskeletal Manifestations of Systemic Lupus Erythematosus. International Journal of Molecular Sciences. 2018; 19(8):2355. https://doi.org/10.3390/ijms19082355