Vitamin D and Influenza—Prevention or Therapy?

Vitamin D generates many extraskeletal effects due to the vitamin D receptor (VDR) which is present in most tissues throughout the body. The possible role of vitamin D in infections is implied from its impact on the innate and adaptive immune responses. A significant effect is also the suppression of inflammatory processes. Because vitamin D could be acknowledged as a “seasonal stimulus”, as defined by R. Edgar Hope-Simpson, it would be crucial to prove it from a potential easy and cheap prophylaxis or therapy support perspective as far as influenza infections are concerned. The survey of the literature data generates some controversies and doubts about the possible role of vitamin D in the prevention of influenza virus. The most important point is to realise that the broad spectrum of this vitamin’s activity does not exclude such a possibility. According to most of the authors, more randomized controlled trials with effective, large populations are needed to explore the preventive effect of vitamin D supplementation on viral influenza infections. View Full-Text
Keywords: vitamin D; influenza; respiratory tract infections vitamin D; influenza; respiratory tract infections
►▼ Show Figures 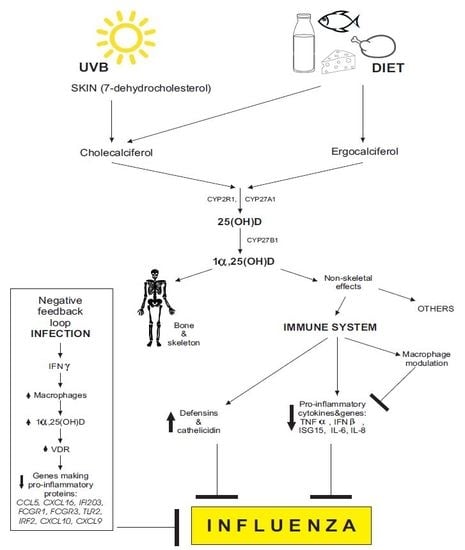