Gram-negative bacteria produce outer membrane vesicles (OMVs) as delivery vehicles for nefarious bacterial cargo such as virulence factors, which are antibiotic resistance determinants. This study aimed to investigate the impact of polymyxin B treatment on the OMV lipidome from paired polymyxin-susceptible and -resistant Klebsiella pneumoniae isolates. K. pneumoniae ATCC 700721 was employed as a reference strain in addition to two clinical strains, K. pneumoniae FADDI-KP069 and K. pneumoniae BM3. Polymyxin B treatment of the polymyxin-susceptible strains resulted in a marked reduction in the glycerophospholipid, fatty acid, lysoglycerophosphate and sphingolipid content of their OMVs. Conversely, the polymyxin-resistant strains expressed OMVs richer in all of these lipid species, both intrinsically and increasingly under polymyxin treatment. The average diameter of the OMVs derived from the K. pneumoniae ATCC 700721 polymyxin-susceptible isolate, measured by dynamic light scattering measurements, was ~90.6 nm, whereas the average diameter of the OMVs isolated from the paired polymyxin-resistant isolate was ~141 nm. Polymyxin B treatment (2 mg/L) of the K. pneumoniae ATCC 700721 cells resulted in the production of OMVs with a larger average particle size in both the susceptible (average diameter ~124 nm) and resistant (average diameter ~154 nm) strains. In light of the above, we hypothesize that outer membrane remodelling associated with polymyxin resistance in K. pneumoniae may involve fortifying the membrane structure with increased glycerophospholipids, fatty acids, lysoglycerophosphates and sphingolipids. Putatively, these changes serve to make the outer membrane and OMVs more impervious to polymyxin attack. View Full-Text
Keywords: outer membrane vesicles; lipidomics; Gram-negative; polymyxin; extremely drug resistant outer membrane vesicles; lipidomics; Gram-negative; polymyxin; extremely drug resistant
►▼ Show Figures 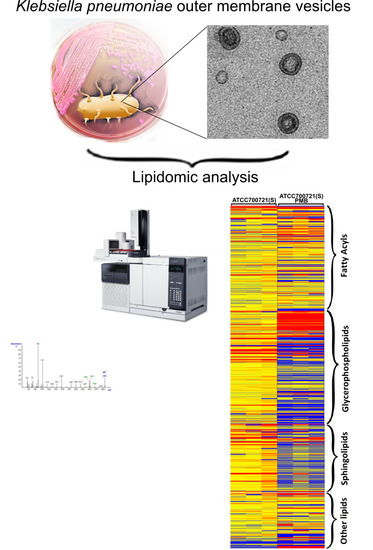