Differences in Functional Expression of Connexin43 and NaV1.5 by Pan- and Class-Selective Histone Deacetylase Inhibition in Heart

The Therapeutic Strategy of HDAC6 Inhibitors in Lymphoproliferative Disease

Histone deacetylases (HDACs) are master regulators of chromatin remodeling, acting as epigenetic regulators of gene expression. In the last decade, inhibition of HDACs has become a target for specific epigenetic modifications related to cancer development. Overexpression of HDAC has been observed in several hematologic malignancies. Therefore, the observation that HDACs might play a role in various hematologic malignancies has brought to the development of HDAC inhibitors as potential antitumor agents. Recently, the class IIb, HDAC6, has emerged as one potential selective HDACi. This isoenzyme represents an important pharmacological target for selective inhibition. Its selectivity may reduce the toxicity related to the off-target effects of pan-HDAC inhibitors. HDAC6 has also been studied in cancer especially for its ability to coordinate a variety of cellular processes that are important for cancer pathogenesis. HDAC6 has been reported to be overexpressed in lymphoid cells and its inhibition has demonstrated activity in preclinical and clinical study of lymphoproliferative disease. Various studies of HDAC6 inhibitors alone and in combination with other agents provide strong scientific rationale for the evaluation of these new agents in the clinical setting of hematological malignancies. In this review, we describe the HDACs, their inhibitors, and the recent advances of HDAC6 inhibitors, their mechanisms of action and role in lymphoproliferative disorders. View Full-Text
Keywords: histone deacetylase; histone deacetylase inhibitor; HDAC6; HDAC6 inhibitors; lymphoproliferative disease; epigenetic histone deacetylase; histone deacetylase inhibitor; HDAC6; HDAC6 inhibitors; lymphoproliferative disease; epigenetic
►▼ Show Figures 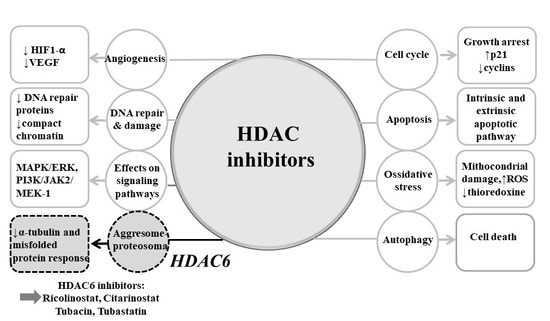