:
Boldine, a major aporphine alkaloid found in the Chilean boldo tree, is a potent antioxidant. Oxidative stress plays a detrimental role in the pathogenesis of kidney damage in renovascular hypertension (RVH). The activation of the renin-angiotensin system (RAS) is crucial to the development and progression of hypertensive renal damage and TGF-β is closely associated with the activation of RAS. In the present study, we assessed the effect of boldine on the progression of kidney disease using the 2K1C hypertension model and identifying mediators in the RAS, such as TGF-β, that could be modulated by this alkaloid. Toward this hypothesis, rats (n = 5/group) were treated with boldine (50 mg/kg/day, gavage) for six weeks after 2K1C surgery (pressure ≥ 180 mmHg). Kidney function was evaluated by measuring of proteinuria/creatininuria ratio (U prot/U Crea), oxidative stress (OS) by measuring thiobarbituric acid reactive substances (TBARS). The evolution of systolic blood pressure (SBP) was followed weekly. Alpha-smooth muscle actin (α-SMA) and Col III were used as markers of kidney damage; ED-1 and osteopontin (OPN) were used as markers of inflammation. We also explored the effect in RAS mediators, such as ACE-1 and TGF-β. Boldine treatment reduced the UProt/UCrea ratio, plasma TBARS, and slightly reduced SBP in 2K1C hypertensive rats, producing no effect in control animals. In 2K1C rats treated with boldine the levels of α-SMA, Col III, ED-1, and OPN were lower when compared to 2K1C rats. Boldine prevented the increase in ACE-1 and TGF-β in 2K1C rats, suggesting that boldine reduces kidney damage. These results suggest that boldine could potentially be used as a nutraceutic.
Keywords:
renovascular hypertension; chronic kidney disease; oxidative stress; fibrosis; (S)-2,9-dihydroxy-1,10-dimethoxy-aporphine

2.3. TGF-β, Which Has Been Linked to Kidney Damage, Was Reduced by Boldine Treatment

The RAS is a classic endocrine system present in the kidney and acting at the adrenal gland to regulate electrolyte balance, blood pressure, and intravascular volume [10]. Angiotensin II (AngII), an octapeptide produced by renal cells, not only stimulates aldosterone secretion, but induces cellular infiltration, proliferation and migration, thrombosis and reactive oxygen species (ROS) production, as well. In addition, it participates in the induction of the inflammatory response characteristic of nephropathy [1]. It has been found that, in the development of renal fibrosis, TGF-β is closely associated with the activation of RAS, due to AngII stimulation of TGF-β transcription and synthesis in the damaged kidney cells [13]. Therefore, AngII is a key mediator in chronic renal damage participating in the development of fibrosis through stimulation of TGF-β [11]. With these antecedents, we wanted to explore the effects of boldine on RAS mediators, such as angiotensin converting enzyme-1 (ACE-1) and TGF-β, in the 2K1C hypertensive rats.
We found that, in 2K1C hypertensive rats, ACE-1 distribution was increased, however, the levels were lower in 2K1C + bold, as observed in control rats, respectively (Figure 6A). These results were complemented by semi-quantitative morphometric analysis for ACE-1 (Figure 6A). Western blot for ACE1 (Figure 6B) showed similar results, where protein levels were significantly higher in 2K1C rats (0.9 ± 0.1 AU), and decreased in 2K1C rats treated with boldine (0.3 ± 0.1 AU), to control levels (in AU: Ctrl, 0.2 ± 0.0; Ctrl + bold, 0.3 ± 0.1).
A TGF-β ELISA assay was performed to determine plasma TGF-β amounts (Figure 7). We observed significantly higher amounts of TGF-β in 2K1C rats (5.2 ± 0.5 ng/mL), however, in 2K1C hypertensive rats treated with boldine, TGF-β amounts (2.5 ± 0.2 ng/mL), were closer to amounts observed in control rats (In ng/mL: Ctrl, 3.2 ± 0.3; Ctrl + bold 2.6 ± 0.3). These results suggest that boldine reduces renal damage by reducing ACE-1 and TGF-β amounts in 2K1C hypertensive rats.

In conclusion, these results suggest that boldine prevents the increase in ACE-1, causing a decrease in all downstream mediators, including TGF-β and mediators downstream of this marker, suggesting that boldine reduces kidney damage affecting the RAS in the kidney of 2K1C rats (Figure 8). We postulate that due to its properties, boldine has a high potential to be used as a nutraceutical compound in the treatment of renal problems.

Adult male Sprague–Dawley rats (100–120 g) were maintained under a 12 h light/12 h dark cycle, with food (20.5% protein, 5% fiber, 4% fat; Champion, Santiago, Chile) and water ad libitum at the university animal care facilities. All procedures were in accordance with institutional and international standards for the humane care and use of laboratory animals (Animal Welfare Assurance Publication A5427-01, Office for Protection from Research Risks, Division of Animal Welfare, NIH (National Institutes of Health), Bethesda, MD, USA), as described previously [46]. The development of this manuscript is part of the objectives of the project “Effect of two phytopharmaceuticals with antioxidant properties on the progression of renal disease” (VRI N2/2011), which has the approval of the Bioethics Committee of the Faculty of Biological Sciences of the Pontificia Universidad Católica de Chile. Rats were randomly divided into four groups: control (Ctrl, n = 5), control + boldine (Ctrl + bold, n = 5), 2K1C Goldblatt (2K1C, n = 5), and 2K1C Goldblatt + boldine (2K1C + bold, n = 5). We used the 2K1C hypertensive model previously described by the group of Guan et al., 1992. Rats were anaesthetized with ketamine/xylazine (10:1 mg/kg of body weight, intraperitoneal); then, a retroabdominal incision in the left flank was performed, the left kidney was exposed. Afterwards, the left renal artery of 2K1C Goldblatt-groups animals was occluded by a silver clip (0.2 mm internal diameter of the vessel), while the right kidney was not disturbed. Control-group rats were sham-operated by an incision made in the flank [9]. After recovery, rats were maintained with food and water ad libitum. Before starting treatment with boldine, Hypertension was confirmed by measuring systolic blood pressure (SBP) weekly with a non-invasive plethysmography (NIBP machine, IITC Inc., Woodland Hills, CA, USA) until SBP was ≥180 mmHg. Once 2K1C animals became hypertensive (pressure ≥ 180 mmHg), a group of them (n = 5) was selected at random to receive the oral treatment with boldine. Boldine (50 mg/Kg/day), or its vehicle (water), were given by gavage over six weeks. Administration was stopped one day before the end of the experiments to study boldine long-term effects without the involvement of its acute administration effects. The last day of the experimental period animals were placed in metabolic cages for 16 h to collect urine in a container built into the cage. The next morning, rats were anesthetized with ketamine/xylazine (10:1 mg/kg of body weight, ip). Blood samples were obtained from the abdominal aorta, centrifuged, and plasma was frozen for further analysis. Urine was measured and aliquoted. Kidneys were processed for immunohistochemistry and Western blotting. Animals were sacrificed by exsanguination under anesthesia.

SBP was determined once a week, in the morning, in conscious pre-warmed restrained rats by a non-invasive plethysmography (NIBP machine, IITC Inc., Woodland Hills, CA, USA). At least four determinations were made in every session and the mean of the four values was taken as the SBP value.

TBARS were quantified by using a modified version of the method published by Ramanathan and collaborators. Supernatant from cells in culture, was mixed with acetic acid (20% v/v), SDS (8% w/v), and thiobarbituric acid (0.8% TBA w/v), and heated at 90 °C for 60 min. Afterwards, the mixture was centrifugated to remove precipitated material, and absorbance was measured at 532 nm. TBARS were estimated with a calibration curve of malondialdehyde tetrabutylammonium salt (MDA) used as standard. MDA was obtained from Sigma-Aldrich (#36357, St. Louis, MO, USA).

Renal slices (3 mm-thick), including the cortex, medulla, and papilla, from different groups, were fixed for 24 h by immersion in Bouin’s solution at room temperature. The tissue was then dehydrated, embedded in Paraplast plus (Monoject Scientific, St. Louis, MO, USA), serially sectioned at 5-mm thickness with a rotatory microtome, mounted on glass slides, and stored until immunostaining. Immunolocalization studies were performed using an indirect immunoperoxidase technique [49]. Tissue sections were quickly dewaxed, rehydrated, rinsed in immune solution (IS) (0.11 M Na2HPO4, KH2PO4 0.04 M, 1 M NaCl, 0.32 M Tris-HCl, and 0.03 M sodium azide) pH 7.6, and incubated overnight at 22 °C with the primary antibody (1:100). Afterward, sections were washed three times with IS for 5 min each, followed by 30 min incubation at 22 °C with the corresponding secondary antibody (1:20) and with the peroxidase-antiperoxidase (PAP) complex (1:150). Immunoreactive sites were revealed using 0.1% (w/v) 3.3′-diaminobenzidine and 0.03% (v/v) hydrogen peroxide solution. The antisera and PAP complex was diluted in IS containing 0.25% (v/v) Triton X-100 and 0.7% (w/v) λ-carrageenan. The sections were rinsed with IS buffer between incubations, counterstained with hematoxylin, dehydrated and cleared with xylene, and coverslipped. Sections were counterstained with hematoxylin and images acquired using a Nikon Eclipse E600 microscope and Nikon DXM1200 digital camera were analyzed using conventional light microscopy and Nomarski differential interference contrast (DIC) microscopy as previously described [50]. The Col III-stained area in each image was quantified utilizing computer-assisted image-analysis software (Simple PCI, Hamamatsu, Japan). Total immunostained cells were averaged and expressed as the mean absolute values per square micron, as previously described [50].

Results were evaluated by ANOVA, and the Tukey’s post-test was used to evaluate the difference between two groups. Results are expressed as the average of values from each independent experiment ± SE and considered significantly different if p < 0.05. Analyses were performed with GraphPad Prism 5 software for Windows (1992–2007, GraphPad Software, 12 March 2007, La Jolla, CA, USA).

The authors thank Carlos Céspedes for the technical assistance in preparing the 2K1C hypertensive model. This study was supported by grants Anillo Act71, FONDEF D07I1086, and Puente VRI 2/2011. 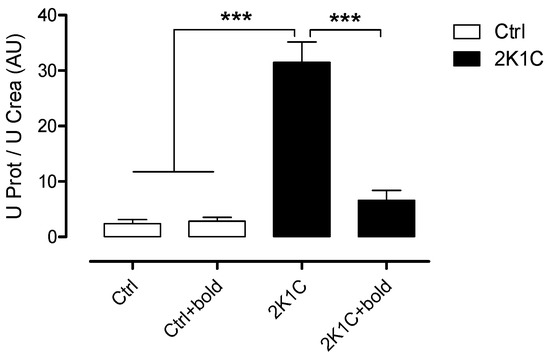 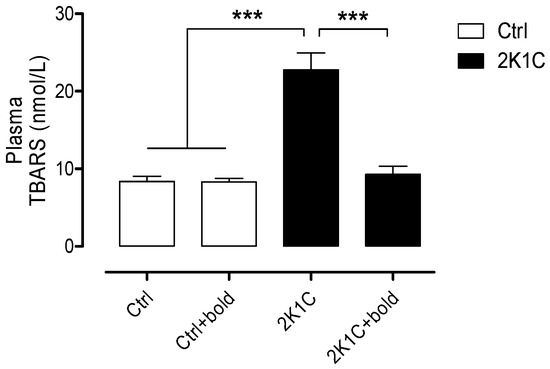 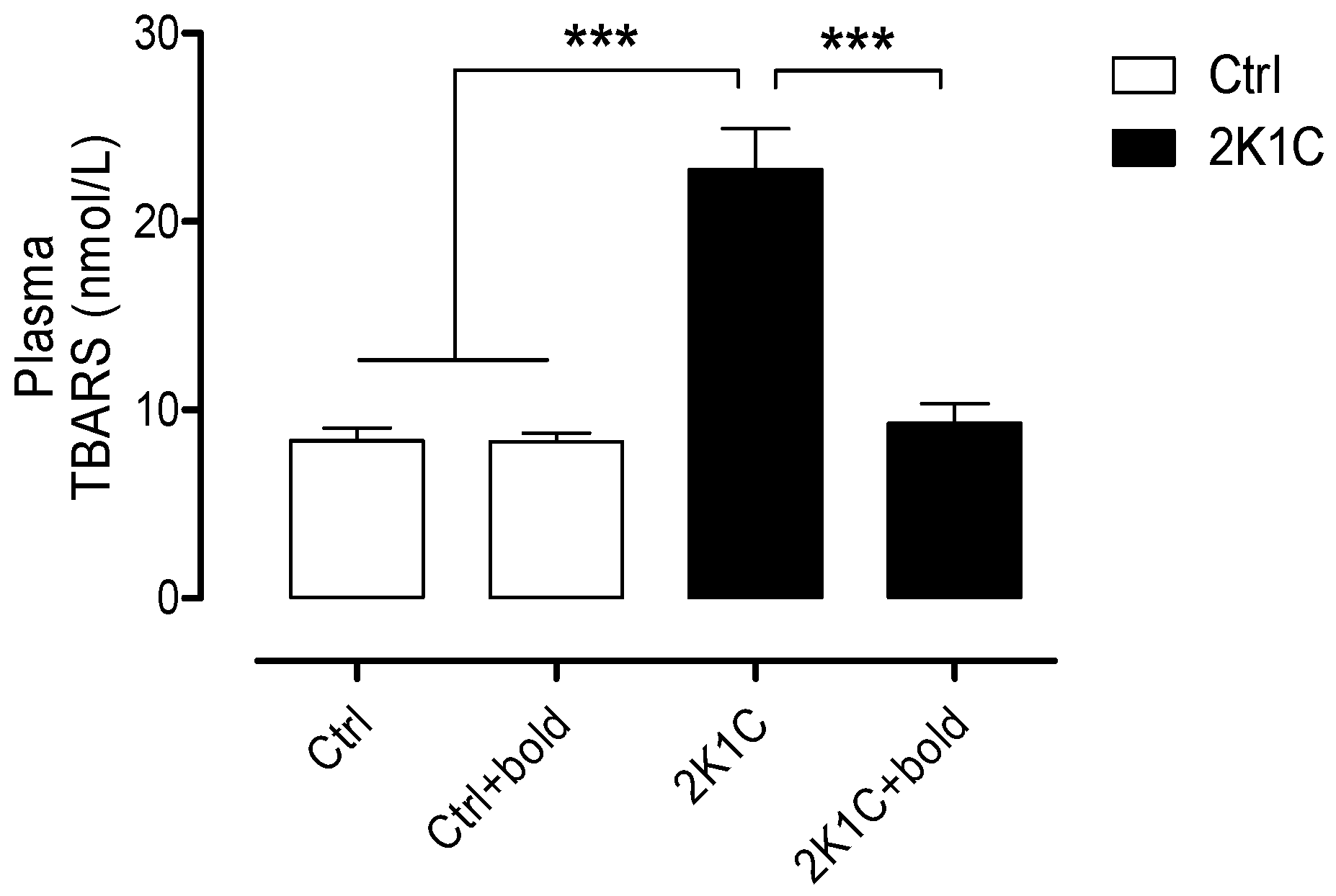 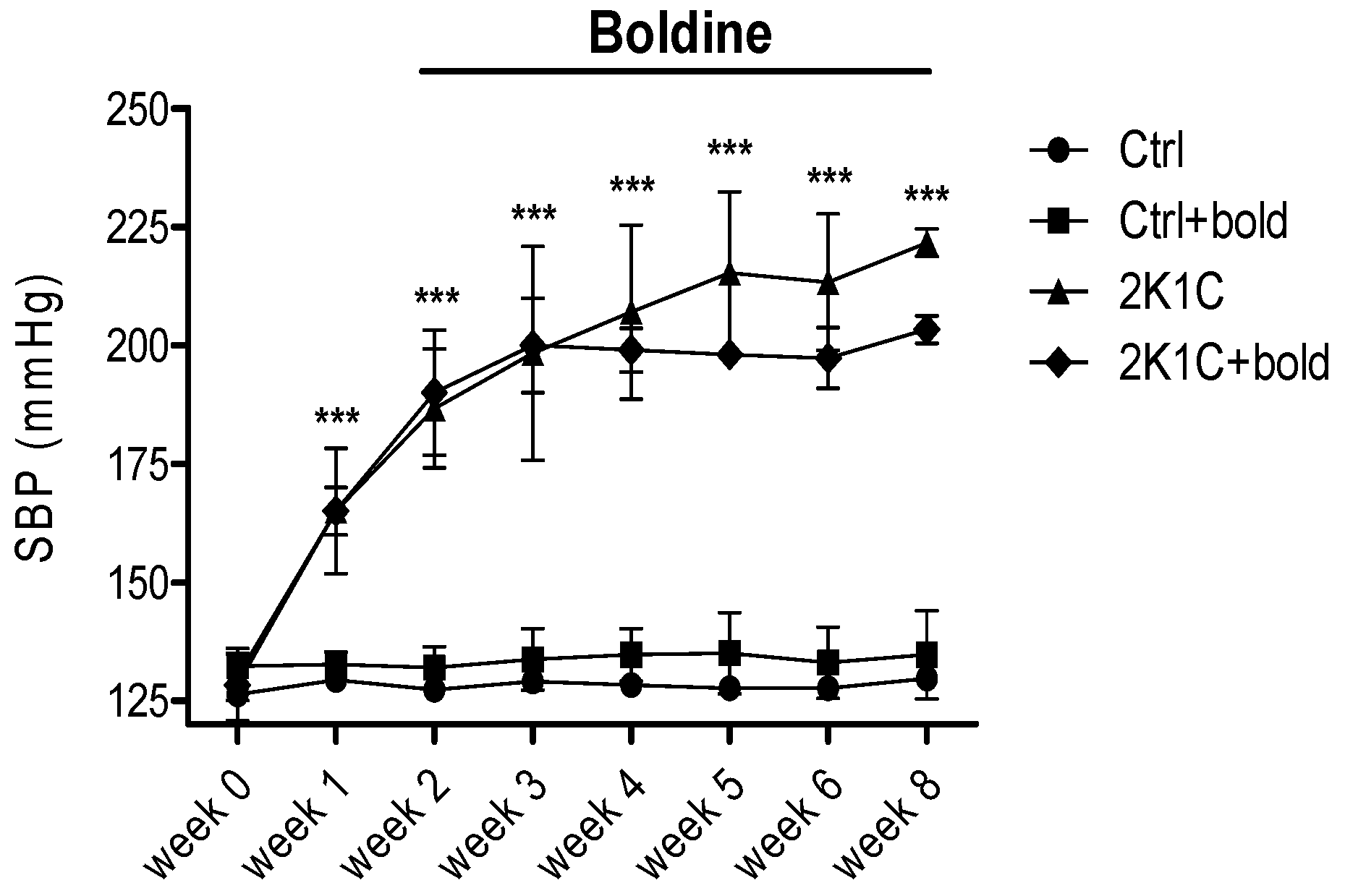 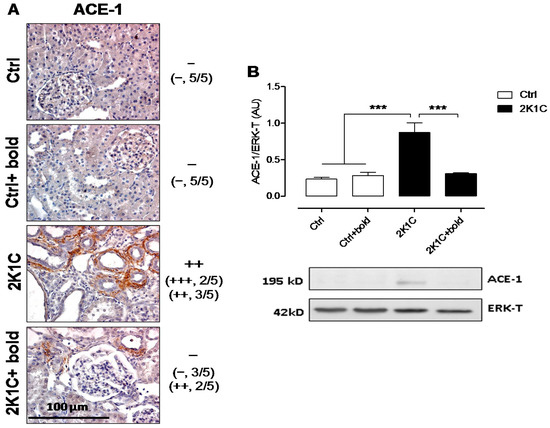 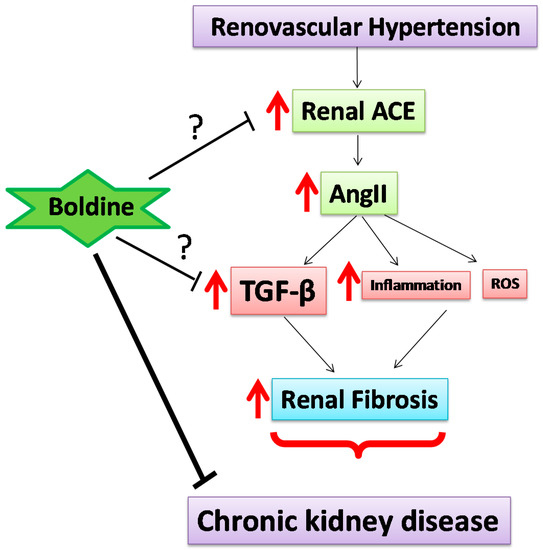