Effect of Acute Stress on the Expression of BDNF, trkB, and PSA-NCAM in the Hippocampus of the Roman Rats: A Genetic Model of Vulnerability/Resistance to Stress-Induced Depression

The Roman High-Avoidance (RHA) and the Roman Low-Avoidance (RLA) rats, represent two psychogenetically-selected lines that are, respectively, resistant and prone to displaying depression-like behavior, induced by stressors. In the view of the key role played by the neurotrophic factors and neuronal plasticity, in the pathophysiology of depression, we aimed at assessing the effects of acute stress, i.e., forced swimming (FS), on the expression of brain-derived neurotrophic factor (BDNF), its trkB receptor, and the Polysialilated-Neural Cell Adhesion Molecule (PSA-NCAM), in the dorsal (dHC) and ventral (vHC) hippocampus of the RHA and the RLA rats, by means of western blot and immunohistochemical assays. A 15 min session of FS elicited different changes in the expression of BDNF in the dHC and the vHC. In RLA rats, an increment in the CA2 and CA3 subfields of the dHC, and a decrease in the CA1 and CA3 subfields and the dentate gyrus (DG) of the vHC, was observed. On the other hand, in the RHA rats, no significant changes in the BDNF levels was seen in the dHC and there was a decrease in the CA1, CA3, and DG of the vHC. Line-related changes were also observed in the expression of trkB and PSA-NCAM. The results are consistent with the hypothesis that the differences in the BDNF/trkB signaling and neuroplastic mechanisms are involved in the susceptibility of RLA rats and resistance of RHA rats to stress-induced depression. View Full-Text
Keywords: forced swimming; Roman rat lines; depression; stress; hippocampus; BDNF; trkB; PSA-NCAM; western blot; immunohistochemistry forced swimming; Roman rat lines; depression; stress; hippocampus; BDNF; trkB; PSA-NCAM; western blot; immunohistochemistry
►▼ Show Figures 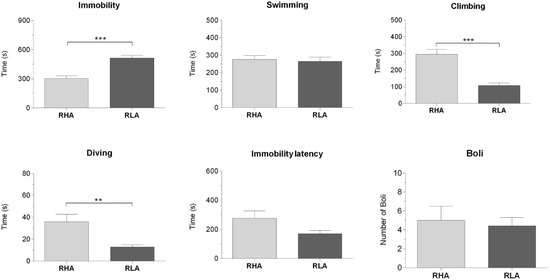