Effect of Acute Stress on the Expression of BDNF, trkB, and PSA-NCAM in the Hippocampus of the Roman Rats: A Genetic Model of Vulnerability/Resistance to Stress-Induced Depression
Next Article in Special Issue

In-and-Out Molecular Changes Linked to the Type 2 Diabetes Remission after Bariatric Surgery: An Influence of Gut Microbes on Mitochondria Metabolism

Different kinds of gastrointestinal tract modulations known as “bariatric surgery” are actually the most effective treatment for obesity and associated co-morbidities, such as type 2 diabetes (T2DM). The potential causes of those effects have yet to be explained. In our study, we focused on molecular changes evoked by laparoscopic sleeve gastrectomy leading to T2DM remission. Two complementary metabolomics techniques, namely, liquid chromatography coupled with mass spectrometry (LC-MS) and gas chromatography mass spectrometry (GC-MS), were used to study those effects in a group of 20 obese patients with T2DM selected from a cohort of 372 obese individuals who underwent bariatric surgery and did not receive anti-diabetic treatment afterward. Modified levels of carnitines, lipids, amino acids (including BCAA) and α- and β-hydroxybutyric acids were detected. Presented alterations suggest a major role of mitochondria activity in T2DM remission process. Moreover, some of the observed metabolites suggest that changes in gut microbiota composition may also correlate with the tempo of diabetes recovery. Additional analyses confirmed a relationship between biochemical and clinical parameters and the aforementioned metabolites, thereby, highlighting a role of mitochondria and microbes. Our data suggests that there is a previously undescribed relationship between mitochondria and gut microbiota, which changes after the bariatric surgery. More investigations are needed to confirm and explore the observed findings. View Full-Text
Keywords: bariatric surgery; metabolomics; diabetes remission; laparoscopic sleeve gastrectomy; LC-MS; GC-MS bariatric surgery; metabolomics; diabetes remission; laparoscopic sleeve gastrectomy; LC-MS; GC-MS
►▼ Show Figures 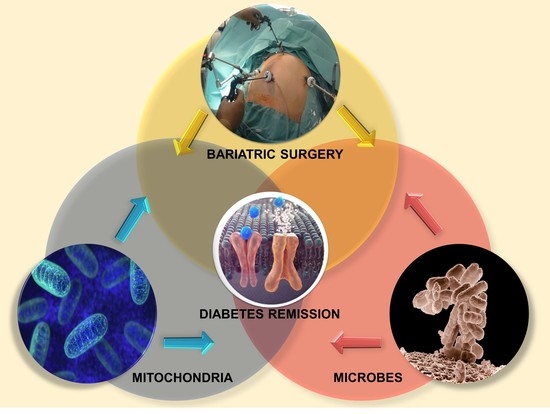