What Do We Know about Opioids and the Kidney?

An Integrated View of Aristolochic Acid Nephropathy: Update of the Literature

The term “aristolochic acid nephropathy” (AAN) is used to include any form of toxic interstitial nephropathy that is caused either by ingestion of plants containing aristolochic acids (AA) as part of traditional phytotherapies (formerly known as “Chinese herbs nephropathy”), or by the environmental contaminants in food (Balkan endemic nephropathy). It is frequently associated with urothelial malignancies. Although products containing AA have been banned in most of countries, AAN cases remain regularly reported all over the world. Moreover, AAN incidence is probably highly underestimated given the presence of AA in traditional herbal remedies worldwide and the weak awareness of the disease. During these two past decades, animal models for AAN have been developed to investigate underlying molecular and cellular mechanisms involved in AAN pathogenesis. Indeed, a more-in-depth understanding of these processes is essential to develop therapeutic strategies aimed to reduce the global and underestimated burden of this disease. In this regard, our purpose was to build a broad overview of what is currently known about AAN. To achieve this goal, we aimed to summarize the latest data available about underlying pathophysiological mechanisms leading to AAN development with a particular emphasis on the imbalance between vasoactive factors as well as a focus on the vascular events often not considered in AAN. View Full-Text
Keywords: aristolochic acids; herbal remedies; Balkan endemic nephropathy; renal interstitial fibrosis; urothelial carcinoma aristolochic acids; herbal remedies; Balkan endemic nephropathy; renal interstitial fibrosis; urothelial carcinoma
►▼ Show Figures 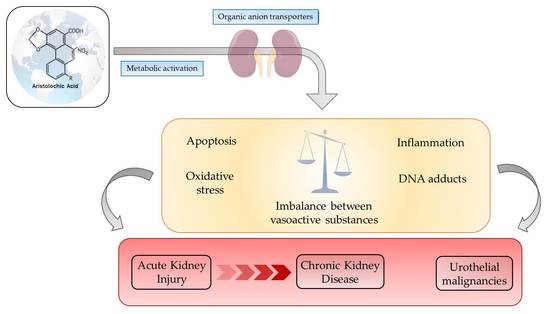