An Integrated View of Aristolochic Acid Nephropathy: Update of the Literature
Next Article in Special Issue

Psoriasis vulgaris is an immune-mediated inflammatory skin disease. Although acitretin is a widely used synthetic retinoid for moderate to severe psoriasis, little is known about patients’ genetics in response to this drug. In this study, 179 patients were enrolled in either the discovery set (13 patients) or replication set (166 patients). The discovery set was sequenced by whole exome sequencing and sequential validation was conducted in the replication set by MassArray assays. Four SNPs (single nucleotide polymorphisms) (rs1105223T>C in CRB2, rs11086065A>G in ANKLE1, rs3821414T>C in ARHGEF3, rs1802073 T>G in SFRP4) were found to be significantly associated with acitretin response in either co-dominant or dominant models via multivariable logistic regression analysis, while CRB2 rs1105223CC (OR = 4.10, 95% CI = 1.46–11.5, p = 0.007) and ANKLE1 rs11086065AG/GG (OR = 2.76, 95% CI = 1.42–5.37, p = 0.003) were associated with no response to acitretin after 8-week treatment. Meanwhile, ARHGEF3 rs3821414CT/CC (OR = 0.25, 95% CI = 0.10–0.68, p = 0.006) and SFRP4 rs1802073GG/GT (OR = 2.40, 95% CI, 1.23–4.70, p = 0.011) were associated with a higher response rate. Four new genetic variations with potential influences on the response to acitretin were found in this study which may serve as genetic markers for acitretin in psoriasis patients. View Full-Text
Keywords: whole exome sequencing; genetic variation; psoriasis; acitretin whole exome sequencing; genetic variation; psoriasis; acitretin
►▼ Show Figures 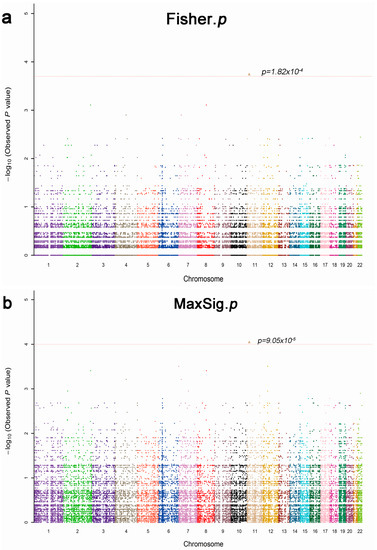