An Overview of Direct Somatic Reprogramming: The Ins and Outs of iPSCs
Next Article in Special Issue

Molecular Evolution of Aralkylamine N-Acetyltransferase in Fish: A Genomic Survey

Animals and plants are increasingly threatened by emerging fungal and oomycete diseases. Amongst oomycetes, Saprolegnia species cause population declines in aquatic animals, especially fish and amphibians, resulting in significant perturbation in biodiversity, ecological balance and food security. Due to the prohibition of several chemical control agents, novel sustainable measures are required to control Saprolegnia infections in aquaculture. Previously, fungal community analysis by terminal restriction fragment length polymorphism (T-RFLP) revealed that the Ascomycota, specifically the genus Microdochium, was an abundant fungal phylum associated with salmon eggs from a commercial fish farm. Here, phylogenetic analyses showed that most fungal isolates obtained from salmon eggs were closely related to Microdochium lycopodinum/Microdochium phragmitis and Trichoderma viride species. Phylogenetic and quantitative PCR analyses showed both a quantitative and qualitative difference in Trichoderma population between diseased and healthy salmon eggs, which was not the case for the Microdochium population. In vitro antagonistic activity of the fungi against Saprolegnia diclina was isolate-dependent; for most Trichoderma isolates, the typical mycoparasitic coiling around and/or formation of papilla-like structures on S. diclina hyphae were observed. These results suggest that among the fungal community associated with salmon eggs, Trichoderma species may play a role in Saprolegnia suppression in aquaculture. View Full-Text
Keywords: salmon; Saprolegniosis; Microdochium; Trichoderma salmon; Saprolegniosis; Microdochium; Trichoderma
►▼ Show Figures 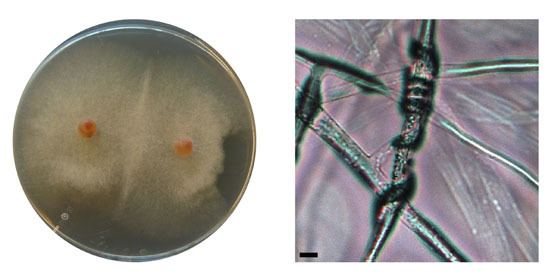