Marine macroalgal (seaweed) polysaccharides are highly promising for next-generation applications in several industries. However, despite the reported comprehensive potential of these polysaccharides, commercial products are scarce on the market. Seaweed cultivations are increasing in number and production quantity, owing to an elevated global trend of utilization interest in seaweed. The extraction of polysaccharides from seaweed generally generates low yields, but novel methods are being developed to facilitate and improve the extraction processes. Current areas of applications for seaweed polysaccharides mainly take advantage of the physicochemical properties of certain polysaccharides, such as gelling, thickening and emulsifying. However, many of the numerous bioactivities reported are still only at research level and lack clinical evidence for commercialization. It has been suggested the construction of smaller units may generate better defined molecules that are more suitable for biomedical applications. Enzymatic modification is a promising tool for the generation of more defined, targeted biomolecules. This review covers; structural differences between the most predominant marine algal polysaccharides, extraction processes, modification alternatives, as well as a summary of current and potential next-generation application areas. View Full-Text
Keywords: seaweed; composition; structure; extraction; enzymatic modification; application; bioactivity seaweed; composition; structure; extraction; enzymatic modification; application; bioactivity
►▼ Show Figures 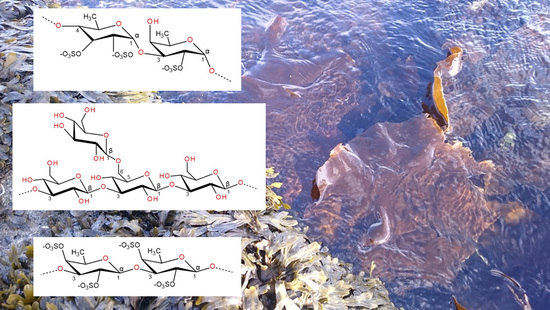