Soybean (Glycine max) is a major crop cultivated in various regions and consumed globally. The formation of volatile compounds in soybeans is influenced by the cultivar as well as environmental factors, such as the climate and soil in the cultivation areas. This study used gas chromatography-mass spectrometry (GC-MS) combined by headspace solid-phase microextraction (HS-SPME) to analyze the volatile compounds of soybeans cultivated in Korea, China, and North America. The multivariate data analysis of partial least square-discriminant analysis (PLS-DA), and hierarchical clustering analysis (HCA) were then applied to GC-MS data sets. The soybeans could be clearly discriminated according to their geographical origins on the PLS-DA score plot. In particular, 25 volatile compounds, including terpenes (limonene, myrcene), esters (ethyl hexanoate, butyl butanoate, butyl prop-2-enoate, butyl acetate, butyl propanoate), aldehydes (nonanal, heptanal, (E)-hex-2-enal, (E)-hept-2-enal, acetaldehyde) were main contributors to the discrimination of soybeans cultivated in China from those cultivated in other regions in the PLS-DA score plot. On the other hand, 15 volatile compounds, such as 2-ethylhexan-1-ol, 2,5-dimethylhexan-2-ol, octanal, and heptanal, were related to Korean soybeans located on the negative PLS 2 axis, whereas 12 volatile compounds, such as oct-1-en-3-ol, heptan-4-ol, butyl butanoate, and butyl acetate, were responsible for North American soybeans. However, the multivariate statistical analysis (PLS-DA) was not able to clearly distinguish soybeans cultivated in Korea, except for those from the Gyeonggi and Kyeongsangbuk provinces. View Full-Text
Keywords: gas chromatography-mass spectrometry; solid-phase microextraction; soybean; origin discrimination; volatile compounds gas chromatography-mass spectrometry; solid-phase microextraction; soybean; origin discrimination; volatile compounds
►▼ Show Figures 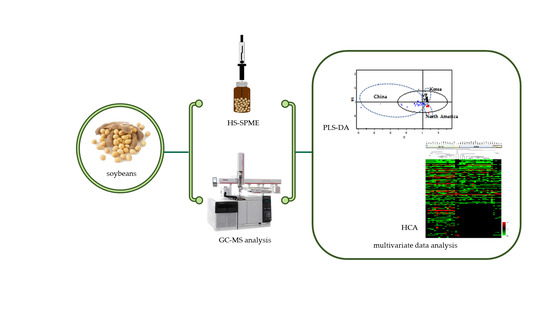