Products of lingonberries are widely used in the human diet; they are also promising beauty and health therapeutic candidates in the cosmetic and pharmaceutical industries. It is important to examine the sugar profile of these berries, due to potential deleterious health effects resulting from high sugar consumption. The aim of this study was to determine the composition of sugars in wild clones and cultivars or lower taxa of lingonberries by HPLC–ELSD method of analysis. Acceptable system suitability, linearity, limits of detection and quantification, precision, and accuracy of this analytical method were achieved. The same sugars with moderate amounts of fructose, glucose, and low amounts of sucrose were found in wild and cultivated lingonberries. Cultivar ‘Erntekrone’ and wild lingonberries collected from full sun, dry pine tree forests with lower altitude and latitude of the location, distinguished themselves with exclusive high contents of sugars. The changes in the sugar levels during the growing season were apparent in lingonberries and the highest amounts accumulated at the end of the vegetation. According to our findings, lingonberries seem to be an appropriate source of dietary sugars.
Keywords: Vaccinium vitis-idaea; lingonberry; sugars; cultivated berries; wild berries; HPLC–ELSD Vaccinium vitis-idaea; lingonberry; sugars; cultivated berries; wild berries; HPLC–ELSD

Linearity for all sugars was evaluated between 0.0625 and 4 mg/mL. Calibration equations with their linearity coefficients of detected sugars in lingonberries presented in Table 1. Limits of detection (LOD) of all tested sugars ranged between 11 and 18 µg/mL, and limits of quantification (LOQ) between 30 and 60 µg/mL. The precision values—repeatability and intermediate precision—were < 2% (relative standard deviation (RSD) of retention times < 1%, and RSD of peak areas < 2%). It could be concluded that our method gave acceptable precision for sugar measurements because the intra- and inter-day variations RSD for sugars were very low. The average recoveries of sugars were 98.08–102.15%, thereby confirming the accuracy of this analytical method. Resolution values were greater than 1.5 and selectivity values were greater than 1, ensuring that the sample components were well separated.

2.2. Qualitative Analysis of Sugars in Wild and Cultivated Lingonberries

Similarly to wild clones, the predominant sugars in cultivars and lower taxa of lingonberries were fructose and glucose (Figure 4). Fructose contributed 43.51–49.49% and glucose contributed 47.40–50.29% of total sugars in different cultivars and lower taxa of lingonberries. The highest contribution of glucose and fructose was found in V. vitis-idaea var. leucocarpum (98.16%), and the lowest one in ‘Kostromskaja rozovaja’ (92.08%). CV of fructose and glucose among tested cultivars and lower taxa were 15.55% and 14.27%, respectively, indicating that the contents of these sugars between cultivated lingonberries did not differ extremely. Significantly the highest contents of fructose were determined in ‘Erntedank’ (327.64 ± 15.01 mg/g DW), ‘Erntekrone’ (317.72 ± 16.57 mg/g DW), and ‘Sussi’ (311.01 ± 11.17 mg/g DW); meanwhile, the lowest (p < 0.05) were in ‘Sanna’ (203.82 ± 7.32 mg/g DW) and ‘Rubin’ (232.47 ± 8.35 mg/g DW) cultivars of lingonberries. The content of glucose among tested cultivars and lower taxa of lingonberries ranged between 214.78 ± 7.72 mg/g DW (in ‘Sanna’ cultivar) and 355.24 ± 18.53 mg/g DW (in ‘Erntekrone’ cultivar). Amounts of sucrose (1.84–7.92% of total sugars in different cultivars and lower taxa of lingonberries) were considerably lower than that of other sugars, but varied within a wide range (CV = 49.85%). Significantly, the highest content of sucrose was found in ‘Kostromskaja rozovaja’ cultivar (47.29 ± 1.71 mg/g DW), whereas the lowest (p < 0.05) in ‘Sanna’ cultivar (11.46 ± 0.41 mg/g DW) and V. vitis-idaea var. leucocarpum (10.68 ± 0.54 mg/g DW). It was noticed that ‘Erntekrone’ cultivar accumulated the highest (p < 0.05) amount of total sugars (708.78 mg/g DW), whilst a lower amount of even more than one and a half times was determined in ‘Sanna’ cultivar.
After hierarchical cluster analysis, the lingonberry cultivars and lower taxa fruit samples were grouped into four significantly different clusters (Figure 5). The first cluster was distinguished by the highest amounts of total sugars, but the lowest of sucrose. The lingonberry cultivars attributed to this cluster were German cultivar ‘Erntedank’, Swedish cultivar ‘Sussi’, and Russian cultivar ‘Kostromička’. Lingonberries of Russian (‘Rubin’) and Swedish origin (‘Sanna’) accumulated the lowest amounts of fructose and glucose and were attributed to the second cluster, whereas the highest amounts of these two sugars were determined in a cultivar of German origin (‘Ertekrone’), which was attributed to the third cluster. The Russian origin ‘Kostromskaja rozovaja’ was attributed to the fourth cluster, which was characterized by the highest (p < 0.05) amount of sucrose and the lowest amount of total sugars. The results of the cluster analysis of cultivated lingonberries indicate genetic variations in the levels of sugars.

2.5. Comparison of Sugars Between Wild and Cultivated Lingonberries

2.6. Sugars of Lingonberries During the Growing Season

The description of collecting locations of tested lingonberry wild clones is displayed in Table 2. These collecting locations of wild clones differed from each other by soil moisture and degree of yield, therefore by the quality of growing conditions. The soil of lingonberry collecting locations was medium humidity, very infertile, with predominant Scots pine (Pinus sylvestris L.) tree species in Varėna, Valkininkai, Aukštadvaris, Marcinkonys, and Juodlė forests; medium humidity, infertile, with predominant Silver birch (Betula pendula Roth) and European spruce (Picea abies (L.) H. Karst.) tree species in Rudnia and Gudžiai forests; and medium humidity, medium fertility, with a large variety of tree species in Gineitiškės, Varčia, and Jurašiškės forests.
Samples of wild lingonberries were collected in berry formation stage (third decade of August, 2017) in the twelve forests mentioned above, and also during different vegetative phases: Massive blooming (2 August, 2017), summer blooming (12 August, 2017), berry formation (21 August, 2017), berry ripening (2 September, 2017), massive berry ripening (16 September, 2017), and at the end of the vegetation (26 September, 2017) in Rudnia forest. These collecting times were chosen according to the lingonberry vegetative phases in Lithuania [26].
Lithuania, a flat country overlooking the Baltic Sea, has a humid continental climate, which can be described as a typical European continental influenced climate with warm, dry summers and fairly severe winters. Agricultural land covers more than 50% of Lithuania; forested land consists of about 28%, with 1.8 million ha. Lithuania is situated within the so-called mixed forest belt, with a high percentage of broadleaves and mixed conifer–broadleaved stands. The average solar radiation during the lingonberries’ growing season from April to September of 2017 was 490 MJ/m2 and ranged between 259 MJ/m2 in September and 710 MJ/m2 in May; meanwhile, the average precipitation was 61 mm and ranged between 20 mm in May and 125 mm in September. Average temperatures varied from 5 °C in April to 17 °C in August. The lowest moisture (53%) during the lingonberries’ growing season in 2017 was determined in May, meanwhile the highest ones—75% and 80%—in August and September, respectively, when berries were collected for this study. It should be noted that the duration of sunshine in 2017 in Lithuania was about 1600 h, and it is much lower compared with previous years; meanwhile, the average temperature of 2017 years was 7.6 °C, which is 0.7 °C above standard climate rate. The meteorological data were obtained from the archive of the Lithuanian Hydrometeorological Service under the Ministry of Environment.

The cultivated lingonberries were collected in the field collection of the Botanical Garden of Šiauliai University (55°55′57′′N, 23°16′59′′E (WGS)). The following seven cultivars of lingonberry were tested: Russian cultivars—’Kostromskaja rozovaja’ (registered in 1995), ‘Kostromička’ (1995), and ‘Rubin’ (1995); Swedish cultivars—’Sanna’ (1987) and ‘Sussi’ (1986); and German cultivars—’Erntedank’ (1975) and ‘Erntekrone’ (1978). Also, one variety (taxonomic rank between subspecies and form) of lingonberries—V. vitis-idaea var. leucocarpum Asch. et Magnus —was included in the study. Lingonberries belonging to this variety distinguish themselves by white berries, and the first time they were found was in 1993 in the forest of Svencioneliai district, Lithuania [27,45].
Lingonberries were cultivated in a partially shaded place, with acidic and well-drained soil. According to meteorological situation, fertilization and irrigation were periodically applied. The dynamics of meteorological factors during the growing season of cultivated lingonberries corresponded to those of wild clones. Fruits of different cultivars and lower taxa of lingonberries were collected at the end of August 2017 (berry formation stage).

4.3. Sample Preparation and Extraction of Sugars

After collecting, lingonberries were immediately frozen and subjected to lyophilization in ZIRBUS sublimator 3 × 4 × 5/20 (ZIRBUS Technology, Bad Grund, Germany) at a pressure of 0.01 mbar (condenser temperature, –85 °C). To grind lyophilized berries to a fine powder, the Retsch 200 mill (Haan, Germany) was used. Lyophilizates of lingonberries were comprised of 0.5 kg berries of each cultivar, lower taxa or wild clones from different forests. All obtained results were re-calculated for dry raw plant material.
One gram of the ground lyophilized lingonberries was added to 15 mL of distilled water in the conical flask and extracted three times in an ultrasonic bath (Elmasonic P, Singen, Germany) for 10 min. After the extraction, the homogenates were centrifugated for 5 min at 8500 rpm in a Biofuge Stratos centrifuge, and obtained supernatants were filtered through a membrane filter with a pore size of 0.22 μm (Carl Roth GmbH, Karlsruhe, Germany).

4.4. Qualitative and Quantitative Analysis of Sugars by HPLC–ELSD Method

The determination of sugar contents was performed using the Waters 2695 Alliance system (Waters, Milford, MA, USA) equipped with a Waters 2424 evaporative light-scattering detector (ELSD). Separation of sugars was carried out using Shodex SUGAR SZ5532 (Showa Denko KK) column (150 × 6.0 mm), according to the methodology described by Zymone et al. [46]. The gradient consisted of eluent A (water) and B (acetonitrile) and followed: 0–5 min—81% B, 5–20 min—81–70% B, 20–22 min—70% B, 23 min—81% B, with the eluent flow rate—1 mL/min and injection volume—10 µL. As the ELSD nebulizer gas (25 psi), nitrogen was used and tube temperature was set to 60 °C. Chromatographic peak identification was carried out by comparing the retention times of the analyte and reference compounds. For sugar quantification, calibration curves were constructed.

The analytical HPLC–ELSD method was validated in terms of linearity, LOD, LOQ, precision accuracy, and system suitability according to the ICH Q2(R1) guidelines [47]. To find out the linearity, standard solutions of authentic samples of sugars were prepared. The standard curves were based on five concentrations, each analyzed in triplicate. LOD and LOQ were determined based on a signal-to-noise ratio (S/N). The detection limit was defined as the concentration that gave a signal-to-noise ratio (S/N) >3 and the quantification limit as the concentration that gave S/N >10. The precision of the method was evaluated by measurement in intra-day (for repeatability) and inter-day (for intermediate precision) variability tests, calculating the relative standard deviation (RSD) of peak areas or retention times. Accuracy of the method was expressed as percent recoveries, which were studied by adding known amounts of standards to the samples. System suitability parameters—resolution and selectivity—were calculated using Empower™ System Suitability software.

Observed sugar amounts in lingonberries are not dangerously high, and consequently, do not seem to be hazardous for consumers of food or health and wellness products of lingonberries. The same sugars with dominant fructose, glucose, and low amounts of sucrose were found in wild and cultivated lingonberries. As a lingonberry product authentication tool, these simple sugars could be searched to prevent adulterations. The presence of moderate levels of fructose in lingonberries reveals potential type 1 fimbriae inhibiting activity and relevance for further studies. Intraspecific variability was detected when comparing the content of sugars in wild clones or cultivated lingonberries, regarding to phenological growth stages. The highest contents of sugars were observed in berries collected at the end of the vegetation—full ripening stage, from sunny, well-drained soil locations with higher solar radiation and temperature. Consideration of these factors may result in lingonberry yields with preferred sugar levels. Naturally sweeter food products of lingonberries would reduce the need for added sugars, whereas reduced sugar levels in orally consumed pharmaceuticals or nutraceuticals would increase the acceptability of consumers. 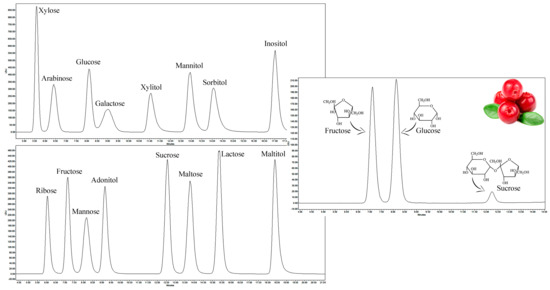 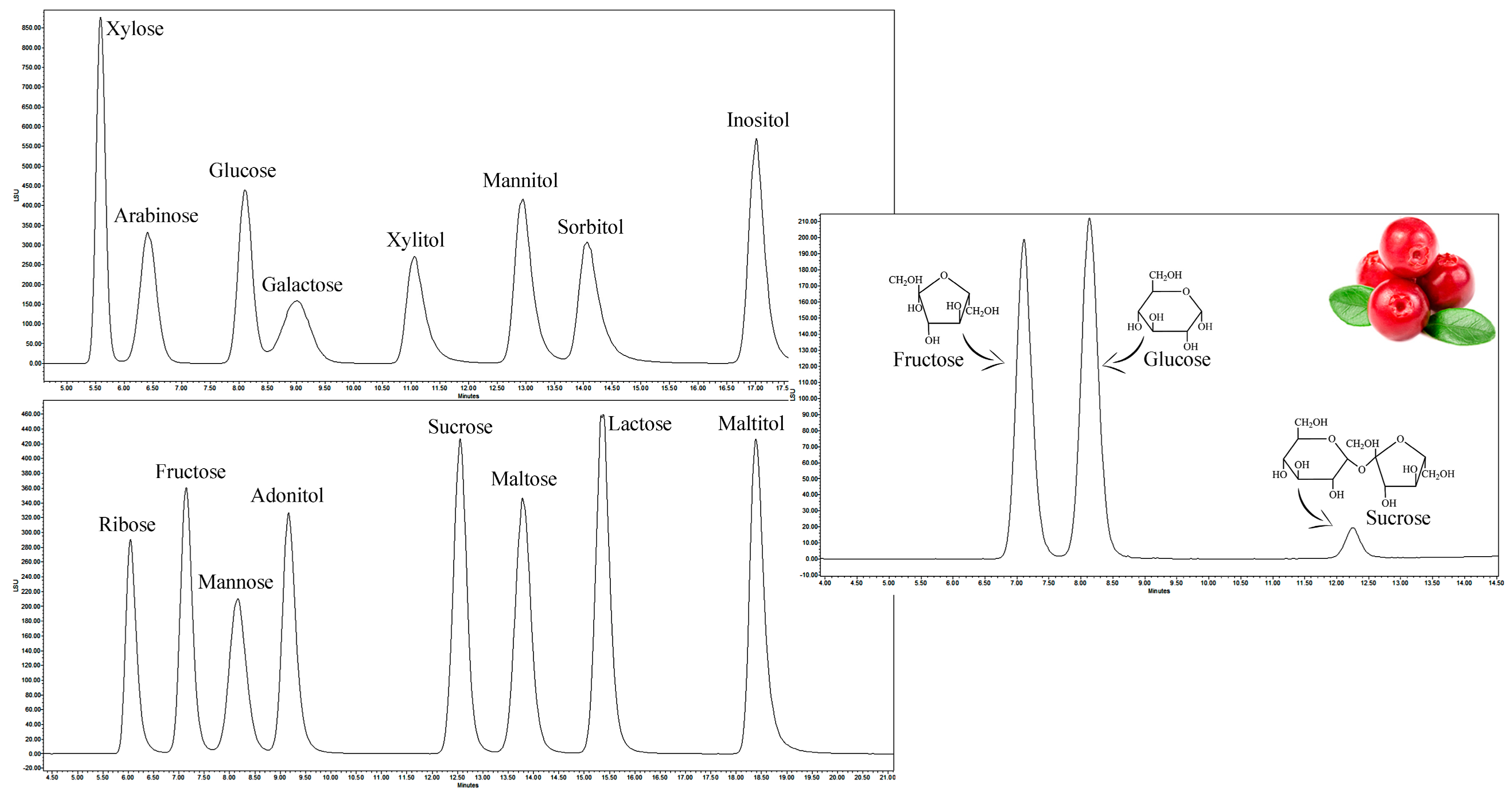 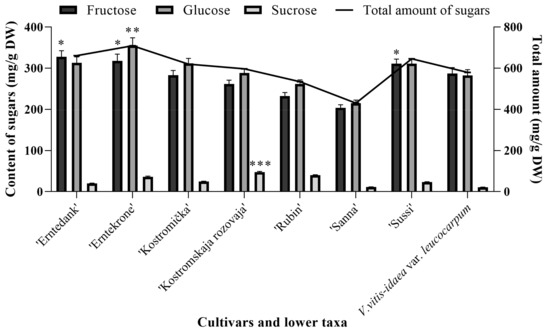 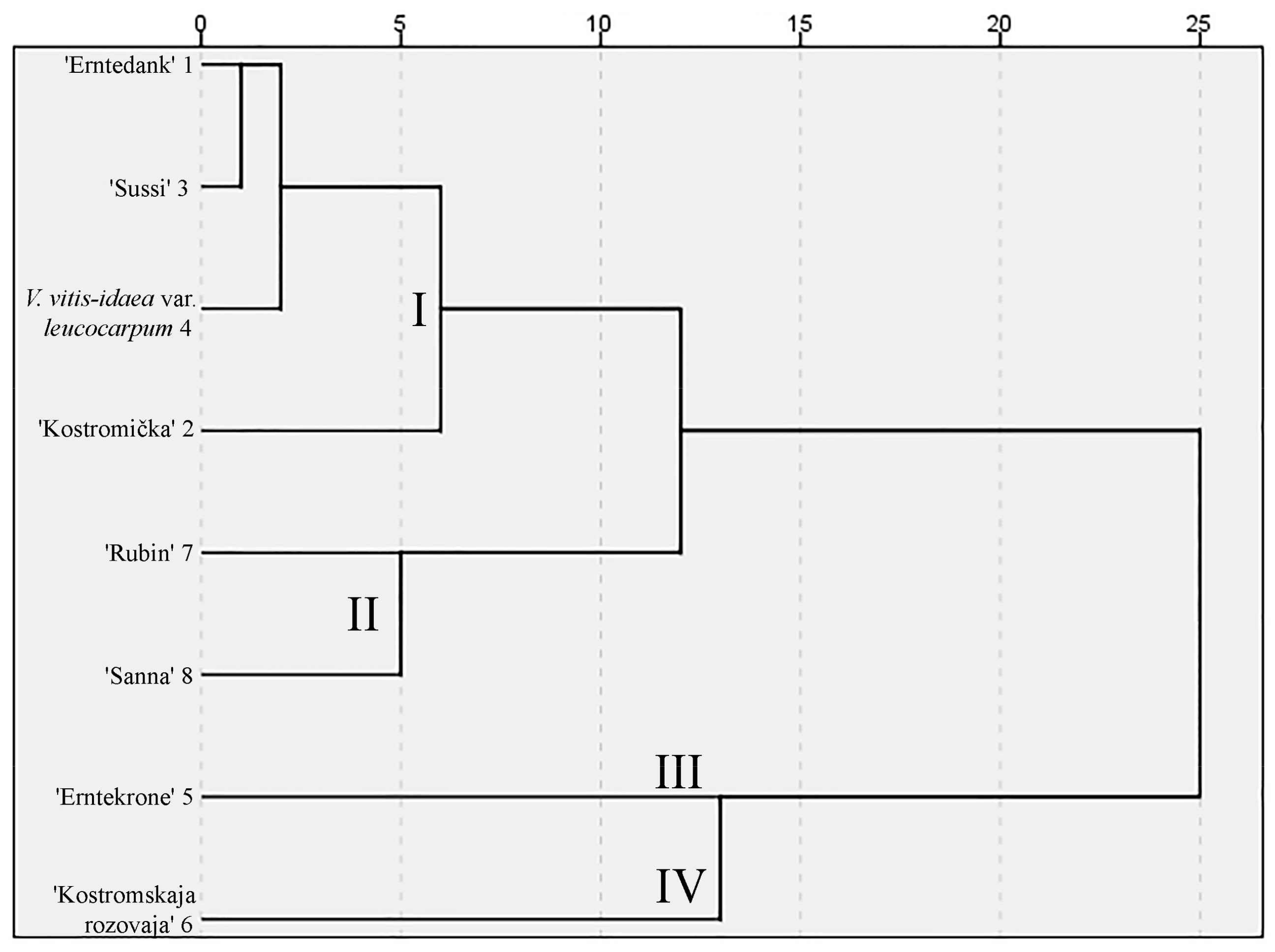