Leukemias are neoplasms that affect hematopoietic cells, which are developed by genetic alterations (mutations) that lead to the loss of proliferation control mechanisms (maturation and/or cell death). The α4β1 integrin receptor is a therapeutic target for inflammation, autoimmune diseases and lymphoid tumors. This study was carried out to search through the antagonists-based virtual screening for α4β1 receptor. Initially, seventeen (17) structures were selected (based on the inhibitory activity values, IC50) and the structure with the best value was chosen as the pivot. The pharmacophoric pattern was determined from the online PharmaGist server and resulted in a model of score value equal to 97.940 with 15 pharmacophoric characteristics that were statistically evaluated via Pearson correlations, principal component analysis (PCA) and hierarchical clustering analysis (HCA). A refined model generated four pharmacophoric hypotheses totaling 1.478 structures set of Zinc_database. After, the pharmacokinetic, toxicological and biological activity predictions were realized comparing with pivot structure that resulted in five (ZINC72088291, ZINC68842860, ZINC14365931, ZINC09588345 and ZINC91247798) structures with optimal in silico predictions. Therefore, future studies are needed to confirm antitumor potential activity of molecules selected this work with in vitro and in vivo assays. View Full-Text
Keywords: leukemia; α4β1 receptor; pharmacophore; PCA; HCA leukemia; α4β1 receptor; pharmacophore; PCA; HCA
►▼ Show Figures 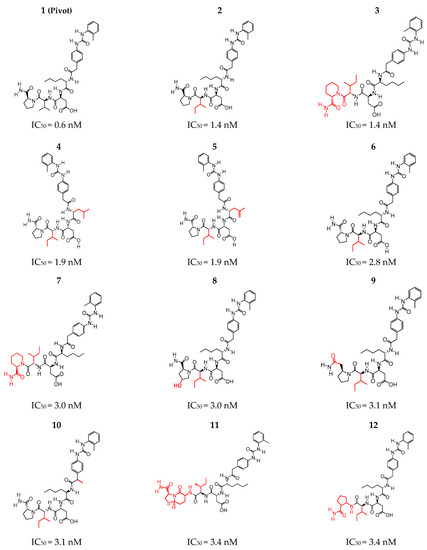