Grape brandy, known as ‘Lozovača’, is one of the most produced alcoholic beverages in the Republic of Serbia. Muscat cultivars are highly priced in grape brandy manufacturing. Among the numerous factors, cultivar-specific characteristics have a significant influence on its quality and aroma profile. Pectolytic enzymes play a part in increasing intensity of the prefermentative aroma by hydrolysis of terpenic glycosides, from which the compounds that contribute to the aroma of brandy are released. In this study, grape brandy samples were produced from five Muscat table grapevine cultivars (Vitis vinifera L.) namely, Early Muscat, Radmilovac Muscat, Banat Muscat, Italia Muscat, and Muscat Hamburg, with the addition of pectolytic enzyme in two different concentrations or without it (control). A total of 58 volatile aroma compounds were detected by means of combined gas chromatographic-mass spectrometric (GC/MS) method. Ethyl esters of C8–C18 fatty acids (21) and terpene (16) compounds were considerably more abundant in all grape brandy samples compared to the other volatile compounds identified. Pectolytic enzyme, positively affected terpenes content in the brandy of all studied cultivars. The similarities between brandy samples produced from Muscat Hamburg (MH) and other Muscat cultivars may be attributed to the parentage of MH to those cultivars. View Full-Text
Keywords: grape brandy ‘Lozovača′; Radmilovac Muscat; Banat Muscat; pectolytic enzymes; terpenes; esters; PCA; AHC; GC/MS. grape brandy ‘Lozovača′; Radmilovac Muscat; Banat Muscat; pectolytic enzymes; terpenes; esters; PCA; AHC; GC/MS.
►▼ Show Figures 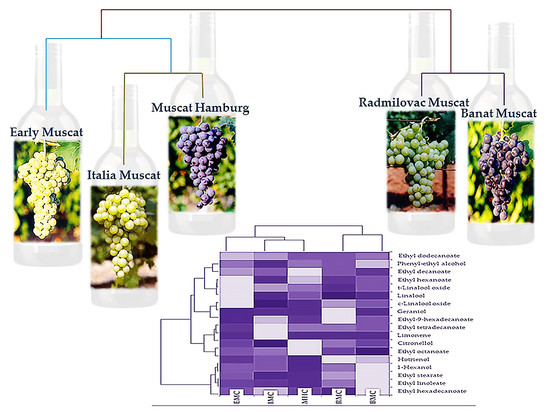