This paper describes a novel combined post-extraction process for obtaining bioactive compounds from the aqueous high molecular weight sulfated polysaccharides (SPs) extracts of the green algae, Ulva lactuca. After extracting the SPs, they were enzymatically hydrolyzed then the hydrolysate (V45) was fractionated into eight different molecular weight fractions (F1–F8) using ion exchange chromatography. Crude SPs together with V45 and (F1–F8) were examined for their carbohydrate, protein, and sulfate contents. In addition, their degree of polymerization (DP) was estimated and they were characterized by Fourier Transform Infrared Spectroscopy (FTIR). Fractions S1, F4, F5, and F8 showed promising antioxidant and antitumor activities in vitro. In particular, the remarkable antitumor activity of F5 on three types of cancer cell lines could be attributed to its comparable contents of protein, carbohydrate, and sulfate, in addition to its comparable contents of rhamnose and glucuronic acid, and the same for glucose and arabinose. F5 also possessed the highest Hill coefficient among the four promising fractions indicating a higher degree of cooperativity in ligand binding. Other influencing factors including DP, composition, and type of characteristic functional groups were also discussed. The implications of this work could potentially benefit the industries of food supplements and pharmaceuticals. View Full-Text
Keywords: algae; polysaccharides; enzymatic hydrolysis; ion exchange chromatography; antioxidant; antitumor activity algae; polysaccharides; enzymatic hydrolysis; ion exchange chromatography; antioxidant; antitumor activity
►▼ Show Figures 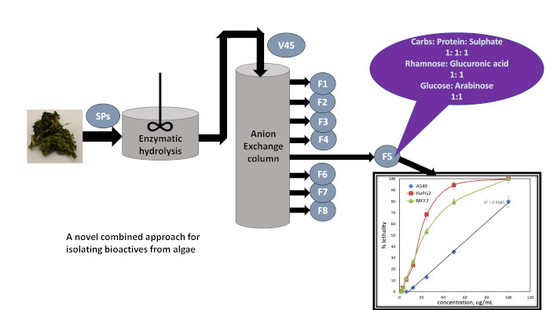