The use of recombinant bovine somatotropin (rbST) in dairy cattle is forbidden in the European Union. Due to the very low circulating concentration of rbST in treated animals, its direct detection is still a challenge. Therefore, the use of indirect methods to detect the ab(use) of rbST in dairy cattle appears as a good alternative. In the past few years, gene expression demonstrated its utility in screening the use of illicit substances in both humans and animals. In this study, a comparison of three types of matrices (milk somatic cells, blood, and hair follicles) was carried out to evaluate their potential use for routine control of rbST using 15 gene-expression profiles. A total of six rbST-treated cows and three control cows were included in the study. A subcutaneous injection containing 500 mg of rbST was administered to the treated group. Samples of the three matrices were collected before rbST administration, and at three and nine days after treatment. The quality of RNA extracted was higher in the blood and hair-follicle samples than in the milk somatic cells. In the three matrices, there were significant differences in the expression of some genes, with milk somatic cells and blood presenting the the best matrices. On this note, the cyclin D1 (CCND1), interleukin 1 beta (IL-1β), tumor necrosis factor (TNF), and insulin-like growth factor 1 receptor (IGF-1R) genes showed potential as biomarkers of rbST treatment. Therefore, blood, somatic cells, and follicle hair should be considered as promising sources of RNA, and can be used in gene-expression assays to routinely control the illicit use of rbST. View Full-Text
Keywords: rbST; nanoliter PCR; gene expression; screening; blood; hair; somatic cells rbST; nanoliter PCR; gene expression; screening; blood; hair; somatic cells
►▼ Show Figures 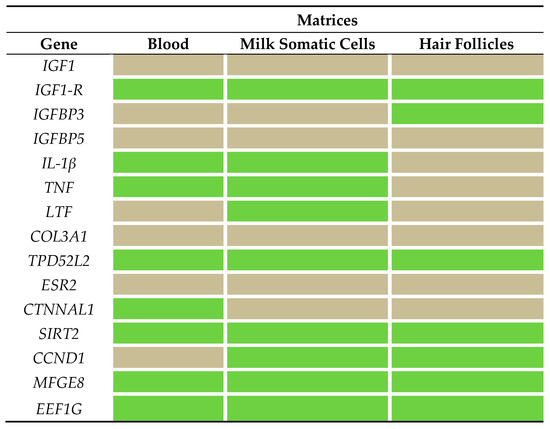