Viruses are underrepresented as targets in pharmacological screening efforts, given the difficulties of devising suitable cell-based and biochemical assays. In this study we found that a pre-fractionated organic extract of the Red Sea sponge Amphimedon chloros was able to inhibit the West Nile Virus NS3 protease (WNV NS3). Using liquid chromatography–mass spectrometry (LC-MS) and nuclear magnetic resonance (NMR) spectroscopy, the identity of the bioactive compound was determined as a 3-alkylpyridinium with m/z = 190.16. Diffusion Ordered Spectroscopy (DOSY) NMR and NMR relaxation rate analysis suggest that the bioactive compound forms oligomers of up to 35 kDa. We observed that at 9.4 μg/mL there was up to 40–70% inhibitory activity on WNV NS3 protease in orthogonal biochemical assays for solid phase extracts (SPE) of A. chloros. However, the LC-MS purified fragment was effective at inhibiting the protease up to 95% at an approximate amount of 2 µg/mL with negligible cytotoxicity to HeLa cells based on a High-Content Screening (HCS) cytological profiling strategy. To date, 3-alkylpyridinium type natural products have not been reported to show antiviral activity since the first characterization of halitoxin, or 3-alkylpyridinium, in 1978. This study provides the first account of a 3-alkylpyridinium complex that exhibits a proposed antiviral activity by inhibiting the NS3 protease. We suggest that the here-described compound can be further modified to increase its stability and tested in a cell-based assay to explore its full potential as a potential novel antiviral capable of inhibiting WNV replication. View Full-Text
Keywords: halitoxin; antiviral; Red Sea; bioprospecting; West Nile Virus; NS3 protease; High-Content Screening (HCS) halitoxin; antiviral; Red Sea; bioprospecting; West Nile Virus; NS3 protease; High-Content Screening (HCS)
►▼ Show Figures 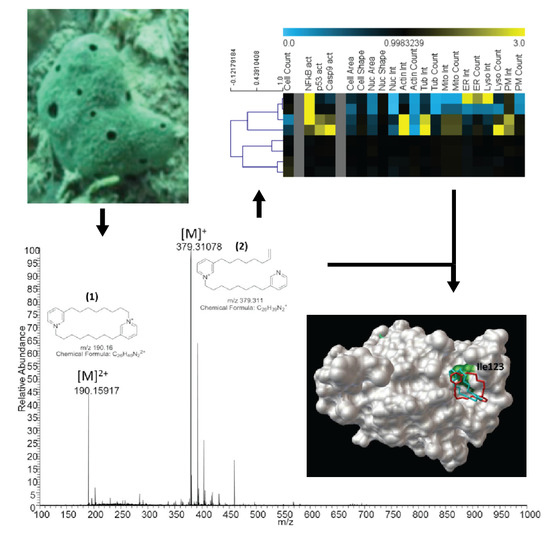