Identification of Ubiquinones in Honey: A New View on Their Potential Contribution to Honey’s Antioxidant State

Lichens are composite living organisms comprised of algae (photobiont) and fungi or cyanobacteria (mycobiont) [1,2], and produce numerous biologically active secondary metabolites with, for example, antiviral, antibiotic, antitumor, or anti-allergenic properties [3]. A huge number of secondary metabolites from more than 20,000 species of lichens have been investigated as potential scaffolds for drug development [2,4,5]. Usnic acid is probably the most investigated compound of these metabolites, and has antibiotic activity and has been used to develop pharmaceutics and cosmetics [6,7,8]. Recently, usnic derivatives were synthesized to enhance its antimicrobial activity [9].
Staphylococcus aureus is a Gram-positive bacterium found on skin and mucosal surfaces, and is a normal inhabitant of the healthy human body. However, in some individuals, such as immunocompromised patients, S. aureus can be pathogenic and cause a range of conditions from minor skin infections to life-threatening diseases, such as pneumonia, endocarditis, and sepsis [10]. Furthermore, S. aureus is related to nosocomial infections and methicillin-resistant S. aureus (MRSA) has become a major health problem [11,12]. Recently, antibiotic compounds of new classes were developed by two step or convenient synthesis to be active against MRSA [13,14]. Antibiotics for staphylococci target the cell envelope, ribosomes, and nucleic acids [15], and vancomycin has proven efficacy against MRSA infections and has been administered even other treatments have failed [16,17]. Enterococcus faecium is a Gram-positive bacterium found in the human gastrointestinal tract, causes diseases, such as neonatal meningitis or endocarditis, and has recently emerged as a therapeutically challenging pathogen [18,19].
Divaricatic acid has been reported in extracts of the lichens Ramalina hierrensis [20], Flavocetraria nivalis and Ophioparma ventosa [21], and Lepraria sp. [22], and the cyclohexane extracts four Algerian lichens, such as Cladonia rangiformis, Ramalina farinaceae, R. fastigiata, and Roccella phycopsis, were reported to be active against human pathogenic fungi [23]. Divaricatic acid isolated from Ramalina aspera was reported to have molluscicidal and antiparasitic activities [24], and that from Lecanora frustulosa had minimal inhibition concentration (MIC) values from 0.78 to 12.5 mg/mL [25].
In this study, we isolated divaricatic acid as the main constituent from an acetone extract of Evernia mesomorpha and investigated its antimicrobial activities, and its activities against MRSA and Candida albicans.

Antimicrobial activities of 435 lichens were determined using 1.0 mg of extracts spotted onto paper disks. Based on halo sizes, samples tested were divided into three groups, i.e., low, moderate, and effective). None of the 258 EA extracts of cultured LFF were active against the tested bacteria, S. aureus and E. faecium. Of the 177 acetone extracts of lichens, 9 and 28 samples were effective against S. aureus and E. faecium, respectively, and 8 samples of them were effective against both strains. Total 29 samples were selected for further evaluation (Table 1).

2.2. HPLC of the Selected Extracts

Prior to selecting extracts for further study, we searched literatures for information on the components and biological activities of the 34 extracts. Based on halo sizes and literature information, we analyzed 8 extracts by HPLC. Six peaks were observed in sample 458 (Evernia mesomorpha) (Figure 2), and other samples produced four to seven peaks (Figures S1–S7). Components were identified by comparing their retention times to standard data (Table 2). Of those compounds identified, usnic acid is well-known to have antimicrobial activity and galbinic acid, atranorin, and chloroatranorin have also been reported to be active [26,27]. We observed divaricatic acid was 17.8 times more abundant than usnic acid in E. mesomorpha extract, and that it exhibited high antimicrobial activity in the screening experiment. Usnea sp. showed the best antimicrobial activity, however, the major component was usnic acid; sample 458 showed less activity than Usnea sp., however, the major component was not well studied in its antimicrobial activity. In view of its antimicrobial activity, novelty, and availability, E. mesomorpha and divaricatic acid were selected for further study.

2.3. Structural Analysis of the Major Active Compound in E. mesomorpha

In the mass spectrometric analyses, the values of m/z ratios of the major MS peaks detected in negative ionization mode indicated the formation of [M − H]− ions (C21H23O7-, m/z = 387) (Figure S8). The 1H-NMR data indicated the presence of one carboxyl group, two benzene ring protons, one methoxy group, and two propyl groups (Figure S9). We compared the MS and 1H-NMR data obtained with those reported for divaricatic acid [28]. Based on the twenty-one carbon peaks in 13C-NMR (Figure S10) and protonated carbon shifts from DEPT (distortionless enhancement by polarization transfer) (Figure S11), the compound was positively identified as divaricatic acid (Figure 3). Purity of the divaricatic acid by LC was 97.1% (Figure S12B), and the peak was corresponded to the third peak of acetone extract of sample 458 (E. mesomorpha) in the same analytical condition (Figure S12A).

3.5. Analysis of Compounds in Extracts

Compounds in extracts with high antibacterial activity were analyzed at KoLRI by HPLC (LC-10AT, Shimadzu, Japan) equipped with a YMC-Pack ODS-A column using a solvent of methanol, water, and H3PO4 (80:20:1, v:v) as eluent [33], and putatively identified by comparing their retention times with a database, as previously described [34].

3.6. Isolation and Purification of Active Compounds and Structure Analysis

Compounds in the selected lichen (E. mesomorpha) extract were isolated by thin layer chromatography (TLC). The acetone extract was dissolved in 1 mL acetone in 1.5 mL EP tubes. For the preliminary study, this solution was spotted on Silica gel 60 F254 pre-coated plates (Merck Millipore, Darmstadt, Germany). The TLC plate was spotted with the sample and loaded in a twin trough chamber containing toluene, dioxane, and acetic acid (180:45:5, v/v), as previously described by Culberson [35]. Plate was removed from the chamber when the solvent front reached 15 cm from baseline and observed under 254 and 365 nm light. The plate was then sprayed with 10% aqueous sulfuric acid and heated for 5 min at 50 °C. For purification of the components, the lichen extract was separated by preparative TLC (PTLC) (silica gel 60 F254, 0.5 mm) using a toluene, dioxane, and acetic acid (90:25:4, v/v) mobile phase [24]. Spots were visualized at 254 nm and the major spot was removed. The silica gel obtained was then washed with MeOH and DCM (5:95, v/v), and the filtrate so obtained evaporated to dryness. Analysis of the compound was performed by a liquid chromatography–mass spectrometry (LC-MS) (LCMS-2020, Shimadzu, Kyoto, Japan) equipped with a reverse-phase column (Shim-pack VP-ODS/-C8/-Phenyl, 250 × 4.6 mm, Shimadzu). Elution was performed using combination of two solvents, that is, 1% formic acid in water (A) or acetonitrile (B). Linear gradient elution was performed using the following schedule: 5% B for 0–5 min; 5% to 30% B over 5–10 min; 30% B for 10–15min; 30 to 70% B over 15–20 min; and 70% B for 20–25 min. The structure of the compound was determined by 1H-NMR (JNM-ECZ400s/L1, JEOL, Tokyo, Japan).

Strains to be tested were grown at 37 °C for 24 h with shaking at 150 rpm. Nutrient agar was used for B. subtilis KCTC 2189 and E. coli KCTC 2441; marine agar for V. vulnificus KCTC 2959; and GPYA for C. albicans KCTC 27242. Other strains were grown in BHI medium. Cell densities were adjusted to an OD of 1.0 at 600 nm and diluted to 500 times. The isolated compound was dissolved in DMSO to produce a 10 mg/mL stock solution, then diluted to 256 μg/mL with BHI medium, then diluted serially twice from 1st to 10th well in a 96-well plate using 50 μL of BHI medium. Thereafter, 50 μL of diluted cells were added to 11th to 1st wells and incubated at 37 °C for 12 h. Each well contained 100 μL of liquid; 11th contained no compound or vancomycin, and 12th contained the medium only without the cell. MIC values were determined by comparing well turbidities with duplicate experiments and were presented as means ± standard errors.

In this study, divaricatic acid was isolated from the lichen E. mesomorpha and identified by LC-MS, 1H-, 13C- and DEPT-NMR. Divaricatic acid was found to be active against Gram + bacteria, such as B. subtilis, S. epidermidis, S. mutans, and E. faecium, and to show an antimicrobial activity against C. albicans. In addition, divaricatic acid was as effective as vancomycin against S. aureus (3A048; an MRSA). These results suggested that divaricatic acid may offer a means of treating MRSA infections.

HPLC chromatograms of the selected lichens, and spectra of LC-MS, 1H-, 13C- and DEPT-NMR spectra of divaricatic acid are available in Supplementary Materials.

This study was supported by the Suncheon Research Center for Natural Medicines, Republic of Korea. 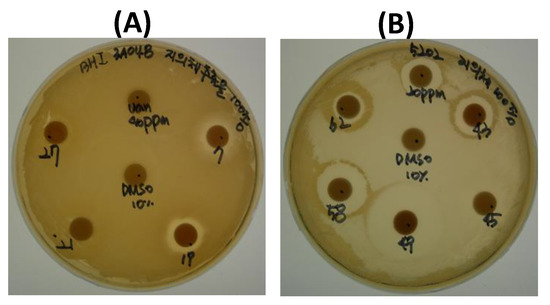 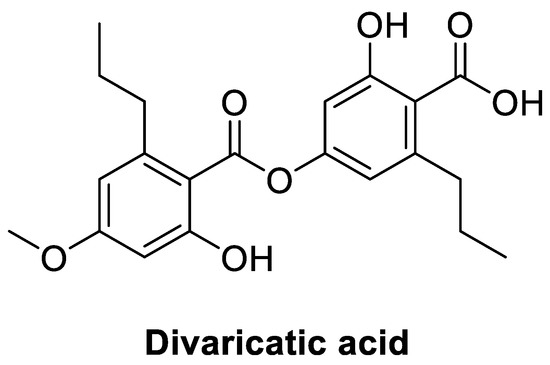