Phenylpropanoid glycosides are the most abundant and important constituents, secondary to iridoid glycosides in Scrophulariae Radix (SR), and the representative components include acteoside, angoroside C, sibirioside A and so on [1]. Some research reported that angoroside C can take many pharmacological roles, including anti-inflammatory [2,3,4], antioxidation [5], and cardiovascular protection [6]. For sibirioside A, there was paucity of reports on its pharmacological activity, but only a few literatures about isolation and purification [7,8,9]. SR is widely used in traditional Chinese medicine, derived from the dried roots of Scrophularia ningpoensis Hemsl. [10]. SR exhibits a variety of pharmacological actions such as anti-inflammation, analgesia, immunoregulation, blood sugar regulation, anticoagulation, cardiovascular protection, and neuroprotection [11,12,13,14,15]. The pharmacopoeia stipulates that the traditional processing method for SR is “sweating-drying” [10], and previous research indicated that the content of angoroside C decreased after traditional processes while sibirioside A was the opposite [16]. It is a novel and promising way to have some insight into the mechanism of crude drug processing in metabolic terms. The rudimentary metabolic characteristics and pathways of harpagoside [17] and harpagide [18] have been resolved. To investigate the in vivo metabolic process of phenylpropanoid glycosides, we chose sibirioside A and angoroside C as research objects.
To explore the metabolism and distribution of compounds in biological samples, high performance liquid chromatography coupled with multi-stage mass spectrometry (HPLC-MSn) is known as an advantageous method, as it provides sensitive, high-resolution and accurate information on hundreds of compounds simultaneously [17]. In this study, we applied the HPLC-IT-TOF-MSn method to investigate the metabolism of sibirioside A and angoroside C and the distribution of their metabolites in rats.

The negative quasi-molecular ion of SM1 at m/z 229.0153 ([M − H]−) was detected in feces and urine samples, and speculated as C9H10O5S. Its degrees of unsaturation were five, meaning there was only one unsaturated bond except for the phenyl group in the molecule. The MS2 spectrum showed fragment at m/z 147.0459 (speculated to be [C9H8O2 − H]−), and its MS3 fragment ion at m/z 103.0348 ([C9H8O2 − CO2 − H]−) indicated that C9H8O2 might be cinnamic acid. Cinnamic acid was the product of SM1 with 82 Da lost, which was considered to be H2SO3. It is well-known that the sulphated compounds could easily lose 80 Da radical group (SO3) instead of 82 Da, but the neutral molecule H2SO3 might be lost if there was active-H in the phenylpropionic acid structure. Then we could conjecture SM1 as phenylpropionic acid sulphate. The cinnamic acid first reacted with glutathione and then hydrolyzed into the cysteine adduct by peptidase, and the cysteine β-liase gave a thiol immediately after, and finally oxidized to be SM1.
SM2 detected in feces samples showed quasi-molecular ion peak at m/z 259.0293 ([M − H]−), indicating C10H12O6S as the predicted formula. The characteristic fragment ion peaks were shown as m/z 177.0540 ([M − H2SO3 − H]−) and m/z 133.0983 ([M − H2SO3 − CO2 − H]−). Its trends of neutral loss conformed with those of SM1, and all the fragment ion peaks were 30 Da (predicted to be CH2O) larger than the correspondent peaks of SM1, which suggested the substitution of methoxyl group. The methoxyl group was the best possibility to substitute at the aromatic ring owing to the absence of methyl (14 Da) or methoxyl (30 Da) loss in MS2 spectrum. Then it could be speculated that SM2 might be 4-methoxyphenylpropanoic acid sulphate in consideration of the substitutive resistance.
The different chromatographic peak of SM3 was observed in feces samples, and showed quasi-molecular ion peak at m/z 393.0755 ([M − H]−). The fragment ion at m/z 311.1019 ([M − H2SO3 − H]−) suggested SM3 to be a sulphate, and it could be dissociated to get m/z 163.0583 and m/z 147.0454. There was no fragment ion at m/z 103.03 rooted from m/z 147.0454, which indicated that the ion at m/z 147.0454 was not cinnamic acid. According to the elemental composition C9H8O2, this fragment was most likely to be β-oxobenzenepropanal. In accordance with the above analysis, SM3 might be β-hydroxybenzenepropanoic anhydride sulphate.
The molecular formula of SM4 detected in stomach samples was predicted to be C27H38O17 according to the quasi-molecular ion peak at m/z 633.2014 ([M − H]−). Its MS2 spectrum showed fragment ion peaks at m/z 485.1416 ([M − cinnamoyl − H]−) and m/z 323.0932 ([sucrose − H]−). Neutral loss of 148 Da (cinnamic acid) occurred from the parent ion to obtain m/z 485.1416, then neutral loss of 162 Da (glucosyl) occurred from m/z 485.1416 to get m/z 323.0932, which was the main fragment ion of sibirioside A predicted to be [sucrose − H]−. To sum up, SM4 was conjectured to be a sibirioside A glucose conjugation.
The metabolites and metabolic pathways of sibirioside A in rats are shown in Figure 3.

2.4. The Distribution of Sibirioside A and Angoroside C in Rats

2.5. Biological Activity Prediction of the Metabolites of Sibirioside A and Angoroside C

A total of 4 metabolites of sibirioside A were found in biological samples, of which SM1 was in urine, SM1–SM3 in feces, and SM4 in the stomach. A total of 25 metabolites of angoroside C were found and identified, of which AM1–AM23 were in urine, AM24 and AM25 were in feces, and AM25 in plasma. For sibirioside A, the main metabolic reactions were hydrogenation, hydroxylation, methylation, sulfation, glycosylation, and dimerization, while the metabolic reaction of angoroside C included hydrolyzation, hydrogenation, sulfation, gluconylation, demethylation, and dehydroxylation. The hydrolyzation reactions occurred in the sugar ester bonds, while the hydrogenation reactions were mainly in double bonds or carboxyl. The sulfation reactive site was the carboxyl group for sibirioside A, but it was the hydroxyl group for angoroside C. The results showed that gluconylation was one of the prime and representative metabolic reactions for angoroside C.
Sibirioside A is an ester glycoside consisting of cinnamic acid and sucrose, and there were less metabolites of it due to the simple molecular structure. The relatively large polarity allowed it to be easily excreted from the urine without the need for complicated metabolic processes. Catalyzed by a variety of enzymes, a portion of sibirioside A was transformed into the metabolites which were mainly sulfated products, then discharged from feces through the bile. The prototype of sibirioside A was detected in all the selected samples except for feces and plasma, which indicated that the rate of sibirioside A clearance was relatively fast in the blood, and it was mainly distributed in the heart, liver, spleen, kidney, stomach, and small intestine in the form of prototype. It was conjectured that sibirioside A might work in the original form and could be preserved for a long time in the viscera in order to extend the time for drug concentration.
Angoroside C is a phenylpropanoid glycoside consisting of three monosaccharide, a phenylpropanoid unit, and a phenylethanoid unit. For angoroside C, total of 25 metabolites were identified, much more than that of sibirioside A, of which 22 were sulfate and glucuronide conjugates. The prototype of angoroside C was detected in urine, feces, stomach, and small intestine samples, but not observed in plasma. It was speculated that the clearance rate of angoroside C in plasma might be fast like sibirioside A. A total of 22 metabolites derived from urine samples had covered all types of metabolic reactions found in this study, and most of the prototype and metabolites were rapidly excreted from the urine.

Nine male Sprague-Dawley rats weighing around 250 g were obtained from the Experimental Animal Center of Peking University’s Health Science Center (Beijing, China). The rats were housed in metabolic cages (type DXL-DL, Suzhou Fengshi Laboratory Animal Equipment Co. Ltd., Suzhou, China) kept in an environmentally controlled breeding room for one week for acclimation and had unrestricted access to laboratory-made chow and distilled water to reduce the biological background interferences. Nine rats were divided into three groups, namely three rats in each group (group A, blank group; group B, sibirioside A group; group C, angoroside C group). The standards of sibirioside A and angoroside C were dissolved in ultrapure water and orally administrated respectively to group B and group C at the dose of 200 mg/kg for six continuous days. The rats in group A were orally treated with the same volume of water. All animal experiments were conducted in accordance with the Guide for the Care and Use of Laboratory Animals of the US National Institutes of Health. Experiments were reviewed by the Biomedical Ethical Committee of Peking University (approval no. LA2015-007). During the continuous six days of administration, the feces and urine samples were dividually collected using the metabolic cages, and the heparin anticoagulant blood sample was collected by heart puncture under anesthesia 1 h after the last administration. The hearts, livers, spleens, lungs, kidneys and small intestines were quickly scissored and lavaged by normal saline, then the tissue samples were stored at −80 °C.

A total of four metabolites of sibirioside A were detected and identified, three of which were new compounds. The main metabolic reactions included hydrogenation, hydroxylation, methylation, sulfation, glycosylation, and dimerization, and the different types of reactions usually occurred simultaneously. Sibirioside A was mainly excreted from urine in the form of prototype. The in vivo metabolism might be carried out in the liver, and then excreted from feces through bile. It was speculated that sibirioside A might take effects in prototype form due to its wide distribution in the heart, liver, spleen, lung, kidney, stomach, and small intestine. There were 25 metabolites identified in vivo for angoroside C, 11 of which were new compounds. The prime metabolic reactions were hydrolyzation, hydrogenation, sulfation, glucuronidation, demethylation, and dihydroxylation. A total of 22 of the metabolites were sulfated or glucuronidization products and mainly excreted from urine just like the prototype, which was concentrically distributing in the stomach and small intestine.
In total, 29 targets were identified including INSR, RASH, KPYR, ANGI and so on, which might be related to anti-diabetes, anti-cancer, anti-anemia, neuroprotection, anti-leukemia, anti-coagulopathy, and osteogenic activities. The predicted outcomes indicated that the metabolites of sibirioside A and angoroside C have a variety of potential pharmacological activities similar to the prototypes, which require further research.
Phenylpropanoid glycosides are a large class of compounds with a simple structure and extensive pharmacological activities. Their metabolic processes in vivo are simple and predominantly they might distribute and take effect in the form of prototypes.

Supplementary materials are available online. Figure S1: The ESI-IT-TOF MSn spectra of angoroside C (A) and sibirioside A (B), Figures S2–S20: The negative ion mode EIC, Table S1: The predicted results of bioactivities for metabolites of sibirioside A and angoroside C.

This work was supported by National Natural Science Foundation of China (Grant No. 81274074). 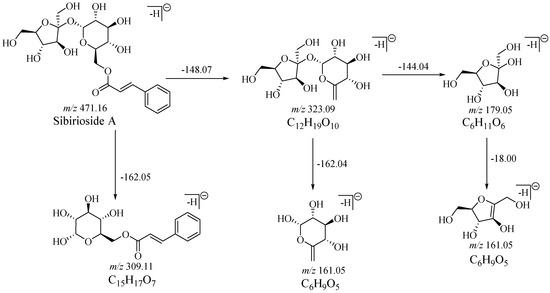 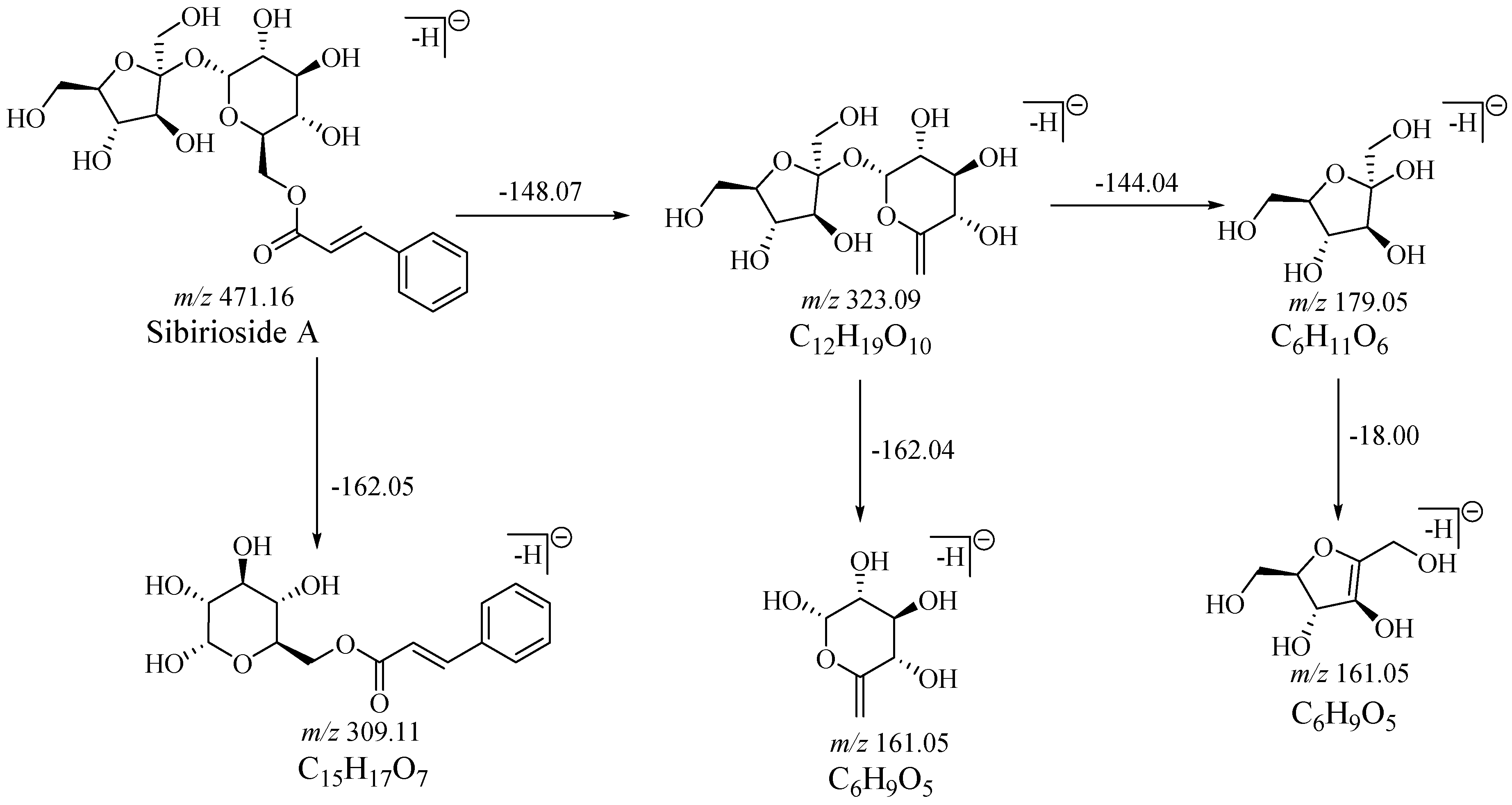 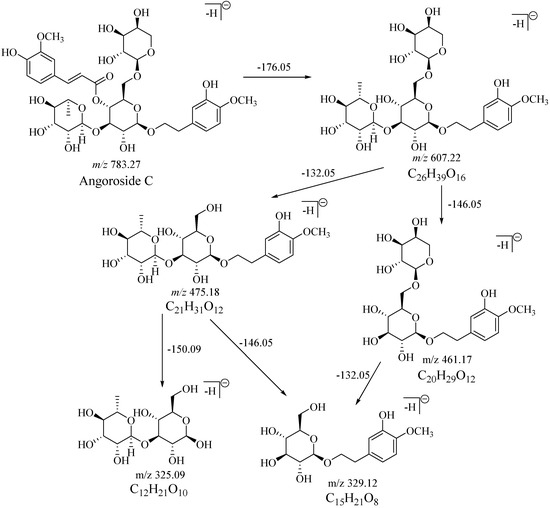 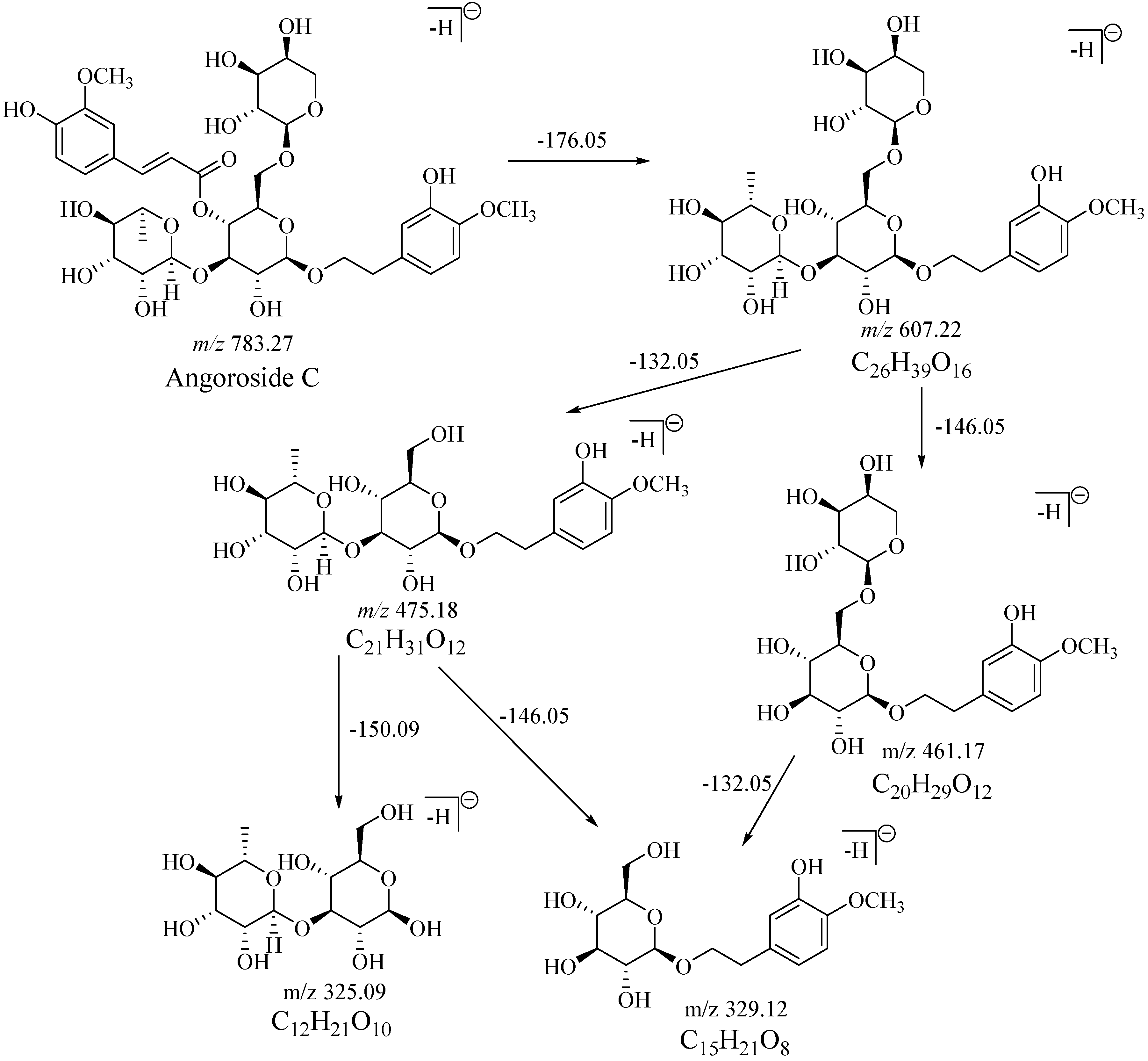 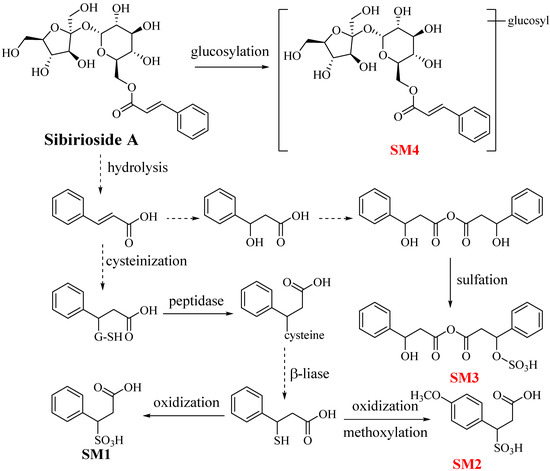 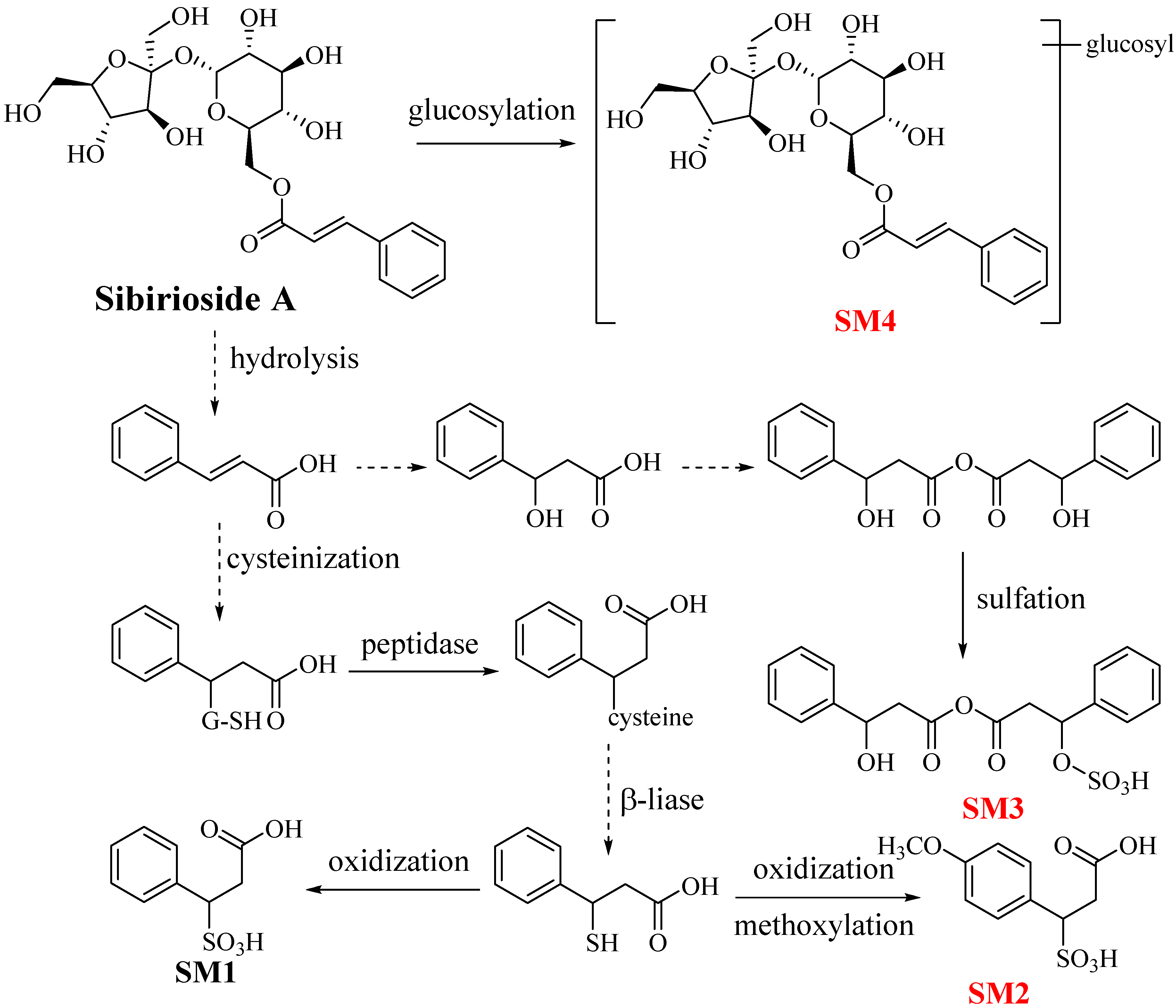 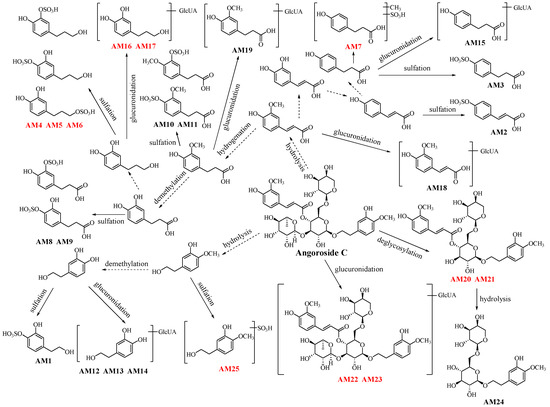 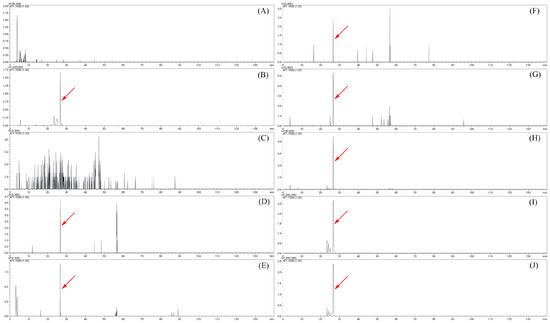 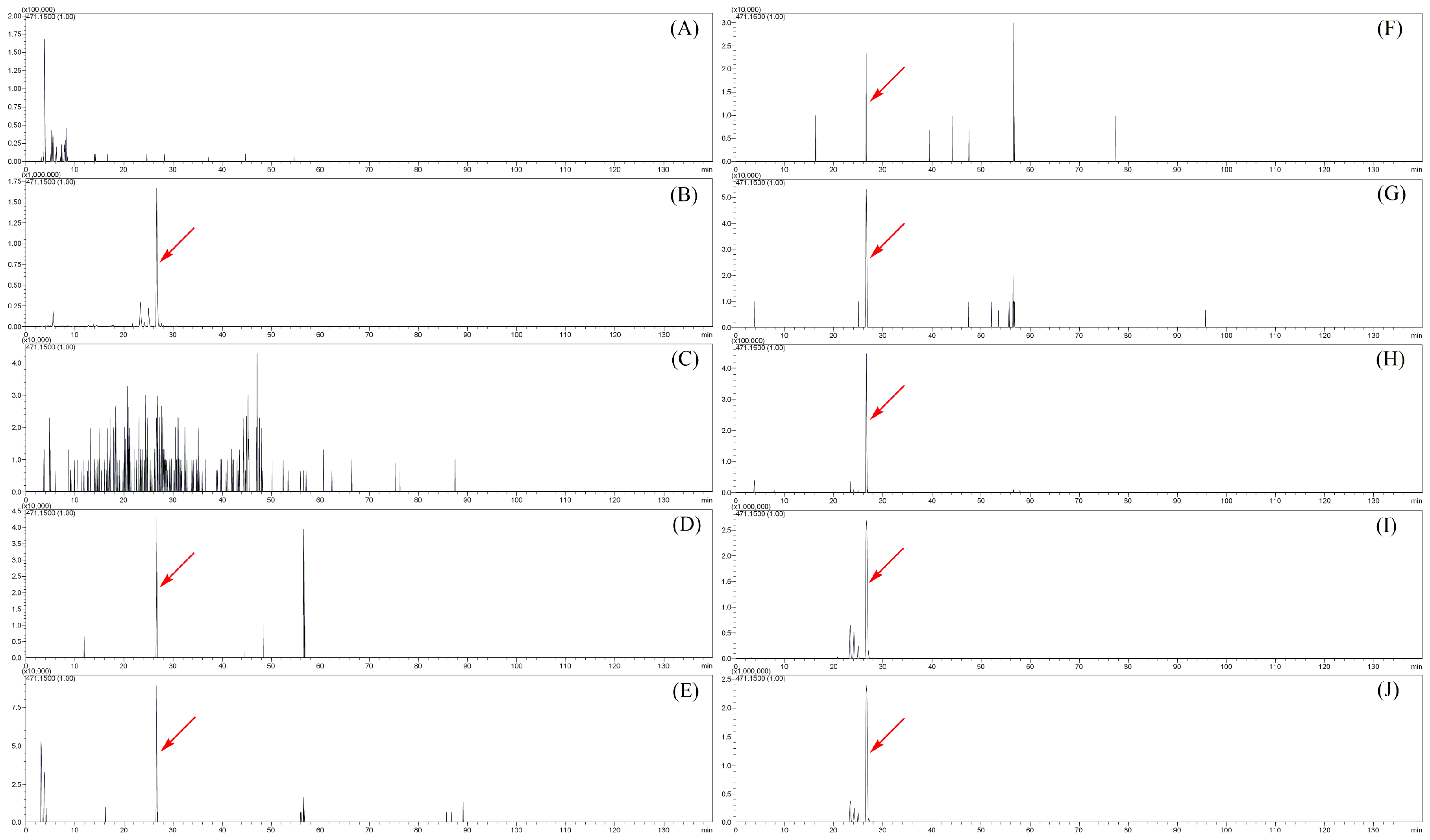 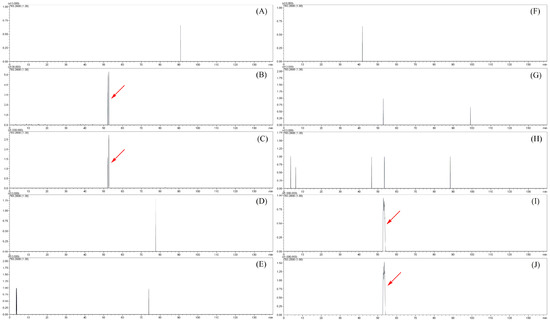 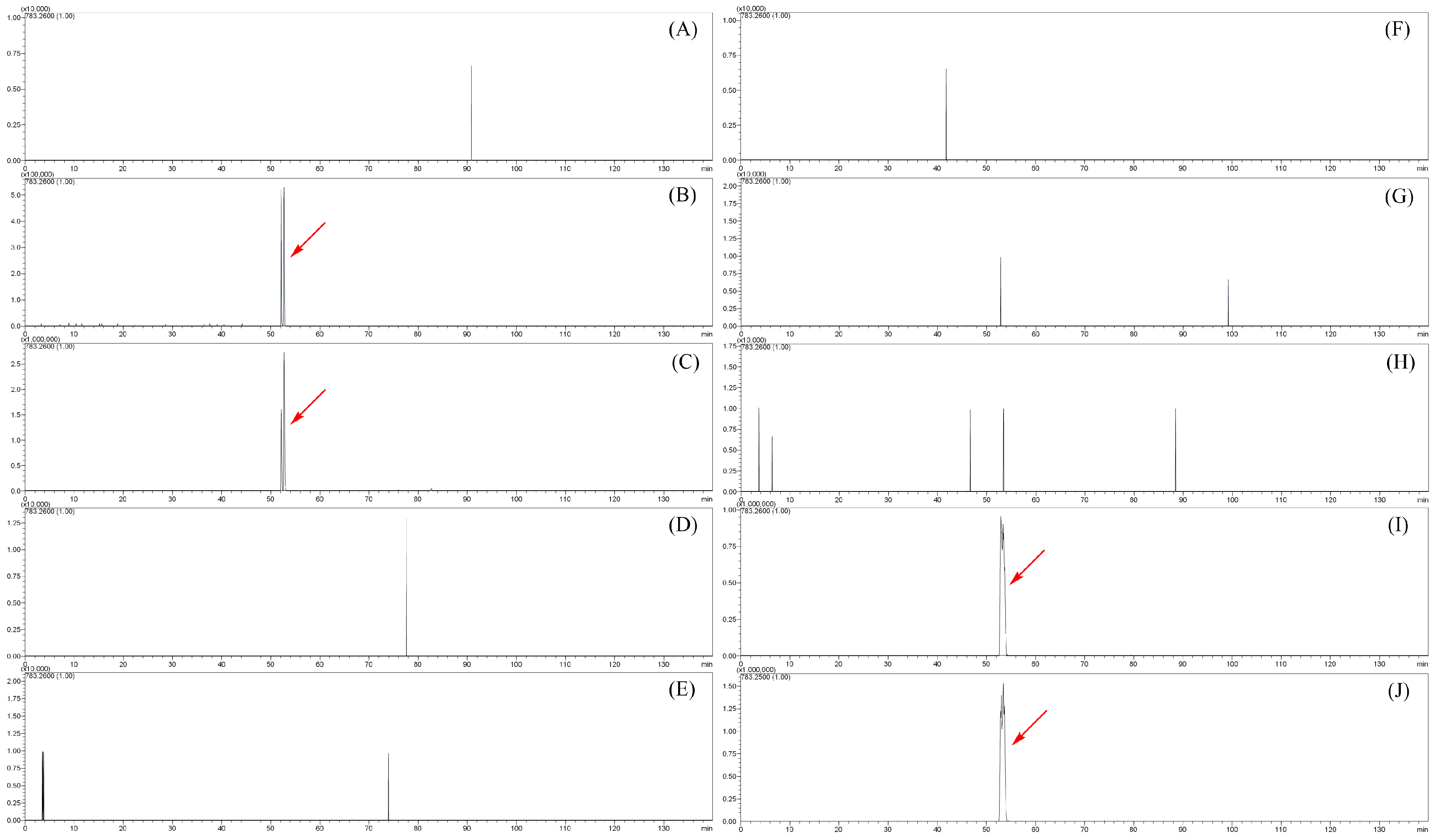