Cationic cyclopentadienyliron (CpFe+) is one of the most fruitful organometallic moieties that has been utilized to mediate the facile synthesis of a massive number of macromolecules. However, the ability of this compound to function as a nucleating agent to improve other macromolecule properties has not been explored. This report scrutinizes the influence of the cationic complex as a novel nucleating agent on the spherulitic morphology, crystal structure, and isothermal and non-isothermal crystallization behavior of the Poly(3-hydroxybutyrate) (PHB) bacterial origin. The incorporation of the CpFe+ into the PHB materials caused a significant increase in its spherulitic numbers with a remarkable reduction in the spherulitic sizes. Unlike other nucleating agents, the SEM imageries exhibited a good dispersion without forming agglomerates of the CpFe+ moieties in the PHB matrix. Moreover, according to the FTIR analysis, the cationic organoiron complex has a strong interaction with the PHB polymeric chains via the coordination with its ester carbonyl. Yet, the XRD results revealed that this incorporation had no significant effect on the PHB crystalline structure. Though the CpFe+ had no effect on the polymer’s crystal structure, it accelerated outstandingly the melt crystallization of the PHB. Meanwhile, the crystallization half-times (t0.5) of the PHB decreased dramatically with the addition of the CpFe+. The isothermal and non-isothermal crystallization processes were successfully described using the Avrami model and a modified Avrami model, as well as a combination of the Avrami and Ozawa methods. Finally, the effective activation energy of the PHB/CpFe+ nanocomposites was much lower than those of their pure counterparts, which supported the heterogeneous nucleation mechanism with the organometallic moieties, indicating that the CpFe+ is a superior nucleating agent for this class of polymer. View Full-Text
Keywords: cationic organoiron complex; bacterial Poly(3-hydroxybutyrate) (PHB); nanocomposites; spherulitic morphology; crystal structure; isothermal and non-isothermal crystallization; thermal stability; FTIR analysis cationic organoiron complex; bacterial Poly(3-hydroxybutyrate) (PHB); nanocomposites; spherulitic morphology; crystal structure; isothermal and non-isothermal crystallization; thermal stability; FTIR analysis
►▼ Show Figures 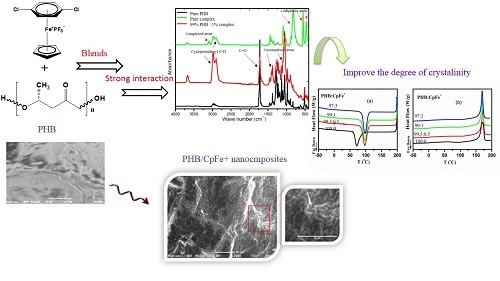