New Methods for the Comprehensive Analysis of Bioactive Compounds in Cannabis sativa L. (hemp)
Next Article in Special Issue

Trypsin is the protease of choice for protein sample digestion in proteomics. The most typical active forms are the single-chain β-trypsin and the two-chain α-trypsin, which is produced by a limited autolysis of β-trypsin. An additional intra-chain split leads to pseudotrypsin (ψ-trypsin) with three chains interconnected by disulfide bonds, which can be isolated from the autolyzate by ion-exchange chromatography. Based on experimental data with artificial substrates, peptides, and protein standards, ψ-trypsin shows altered kinetic properties, thermodynamic stability and cleavage site preference (and partly also cleavage specificity) compared to the above-mentioned proteoforms. In our laboratory, we have analyzed the performance of bovine ψ-trypsin in the digestion of protein samples with a different complexity. It cleaves predominantly at the characteristic trypsin cleavage sites. However, in a comparison with common tryptic digestion, non-specific cleavages occur more frequently (mostly after the aromatic residues of Tyr and Phe) and more missed cleavages are generated. Because of the preferential cleavages after the basic residues and more developed side specificity, which is not expected to occur for the major trypsin forms (but may appear anyway because of their autolysis), ψ-trypsin produces valuable information, which is complementary in part to data based on a strictly specific trypsin digestion and thus can be unnoticed following common proteomics protocols. View Full-Text
Keywords: autolysis; chain; cleavage; digestion; peptide; proteoform; pseudotrypsin; specificity; trypsin autolysis; chain; cleavage; digestion; peptide; proteoform; pseudotrypsin; specificity; trypsin
►▼ Show Figures 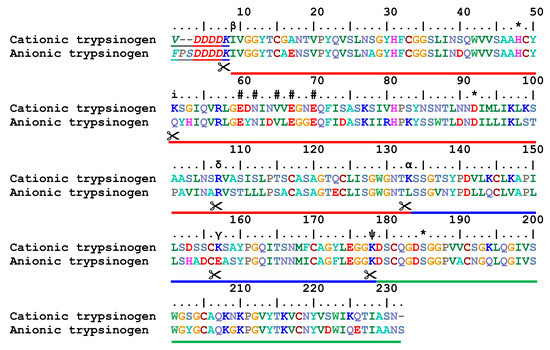