The liver is a vital organ with detoxifying functions [1]. Many compounds, including clinically active drugs, can be metabolically activated into free radicals leading to oxidative stress [2]. CCl4 is used experimentally to induce acute liver injury. It is metabolized by the cytochrome P450 enzyme system into highly reactive trichloromethyl free radicals (•CCl3) and then to trichloromethylperoxy radicals (CCl3OO•), which attack biological molecules leading to lipid peroxidation and depletion of antioxidant enzymes [3]. Some drugs targeting the liver have potential adverse effects, especially when administered chronically [4]. For this reason, more attention has been paid to natural antioxidants believed to be harmless and free from adverse effects as an alternative therapy for liver diseases [5].
Recently, researchers have focused on mushrooms which produce a wide range of interesting bioactive compounds including lectins, ribonucleases, laccases, proteases, and polysaccharides [6,7]. These compounds exhibit antioxidative, antiproliferative, antitumor, immunomodulatory, and HIV-1 reverse transcriptase inhibiting activities with therapeutic potential [8]. Polysaccharides with various activities are produced by plants, bacteria, fungi, and algae [2,9,10,11]. Plant polysaccharides possessed antioxidant and anticancer activities [11]. Mushroom polysaccharides and polysaccharopeptides exhibit a diversity of activities. For instance, polysaccharide fractions of Phellinus linteus augmented cytokine production by macrophages and enhanced the cytotoxic action of natural killer cells [10], while ReishiMax, a mixture of polysaccharides and triterpenes from the medicinal mushroom Ganoderma lucidum, hampered adipocyte differentiation and stimulated glucose uptake by 3T3-L1 adipocytes [12]. Additionally, polysaccharopeptide from Coriolus versicolor displayed anticancer activity [13], and polysaccharide from Pleurotus eryngii exhibited antihyperlipidemic activities [7]. Furthermore, polysaccharides from some mushrooms exerted protective effects against acute hepatotoxicity in rats [14,15]. These activities endow mushrooms with a tremendous potential as a source of health-promoting compounds [15].
Oudemansiella radicata, an edible wild mushroom with high economic value, is distributed in broad-leafed forests. However, publications on this mushroom are confined to its antifungal antibiotic (the metabolite oudenone), and the effects of lead and cadmium on the mushroom [16,17]. As far as we know, there are no reports on the hepatoprotective effect of the polysaccharides from this mushroom against CCl4-induced hepatotoxicity in rats. In view of the scarce information and due to our observation that O. radicata polysaccharides displayed antioxidative activity, we hypothesized a possible protective effect of O. radicata on CCl4-induced liver injury.

2.1. Isolation and Characterization of Polysaccharides

Five parameters were monitored and the results are as follows.

2.3.1. Effects of Polysaccharides on Body Weight, Liver Weight and HI in Mice

2.3.2. Effects of the Polysaccharides on AST, ALT, MDA, GSH-Px and SOD Activities

ORWP and ORAP exhibited no acute toxicity towards the experimental mice. Additionally, no mortality occurred within 48 h either in the control or treated groups. No gross behavioral differences were found between the groups in the first 24 h.

4.2. Extraction and Isolation of Polysaccharides

O. radicata polysaccharides were isolated following a published procedure [45]. Briefly, dried fruiting bodies of the mushroom (100 g) were crushed into powder using a disintegrator (Baijie, Deqing, China). The powder was extracted twice with 20 vol 95% ethanol (w/v) for 2 h to remove lipids. The degreased powders were air-dried, and then extracted with 10 vol of water (w/v) at 90 °C for 6 h. The supernatant obtained after centrifugation (9000× g, 4 °C, 10 min), and then the residue collected was extracted with 500 mL 0.5 M NaOH solution at room temperature for 5 h. The extract was condensed and precipitated by adding 3 vol 95% ethanol at 4 °C overnight. The precipitate was collected by centrifugation, deproteinated, and then dialysed overnight against distilled water [46]. Finally the deproteinated supernatant was lyophilized to obtain crude O. radicata polysaccharides (cORWP/cORAP). The cORWP/cORAP was dissolved in distilled water, and then applied to a 5 cm × 20 cm column of DEAE-cellulose (Sigma, St. Louis, MO, USA), which was eluted at 3.0 mL/min with distilled water. The eluent was concentrated, lyophilized, and then subjected to gel filtration on a Superdex 75 HR 10/30 column (GE Healthcare, Little Chalfont, UK) in 0.15 M NH4HCO3 buffer (pH 8.5). The eluent was collected automatically and the carbohydrate content was determined. The main fraction was lyophilized to yield ORWP/ORAP which was used for further studies.

Total carbohydrate content of the polysaccharide was determined by using the authrone-sulfuric acid colorimetric method, with glucose as the standard [47]. The protein content of the polysaccharide was measured by using Bradford’s method [48]. The monosaccharide composition of ORWP/ORAP was analyzed by gas chromatography-mass spectrometer (GC-MS). ORWP/ORAP was firstly hydrolyzed with 2 M H2SO4 at 100 °C for 6 h. After neutralization with Ba(OH)2, the supernatants were collected and lyophilized. The hydrolysates were then converted into their completely acetylated derivatives and analyzed by GC-MS using the method reported by Han et al. [49].

The UV absorption spectra were obtained with a spectrophotometer (Thermo Scientific, Waltham, MA, USA) in the range of 200–400 cm−1 [46]. The infrared spectra of ORWP/ORAP were determined using a fourier transform infrared spectrophotometer (Thermo Nicolet, Waltham, MA, USA) with KBr pellets in a frequency range of 4000–500 cm−1.

4.6. Analyse of the Antioxidant Activity In Vitro

Scavenging activity of ORWP/ORAP toward DPPH free radicals was determined using the method of Cheng et al. [43] with slight modifications. Briefly, 150 μL of different concentrations (0–5 mg/mL) of the samples were added to 450 μL of a 0.004% methanol solution of DPPH, and the mixture was shaken thoroughly. After incubation in the dark (30 °C, 30 min), absorbance (A) of the assay mixture was determined at 517 nm. Ascorbic acid was used for comparison:
Percent scavenging of DPPH radical (%) = (Acontrol − Asample)/Acontrol × 100

The inhibitory effect on lipid peroxidation was determined in according to the conjugated diene method with some modifications [29]. Samples at different concentrations (0–5 mg/mL) were prepared, and incubated with 500 μL linoleic acid emulsion (10 mM) in 0.2 M sodium phosphate buffer (pH 6.5) for 15 h at 37 °C. Then, 1.5 mL 60% methanol in deionized water was added, and the absorbance (A) was measured at 234 nm. Ascorbic acid was used for comparison:
Inhibition of lipid peroxidation (%) = (Acontrol − Asample)/Acontrol × 100

Reducing power was evaluated with a slight modification of the published method [50]. One milliliter of sample, 1.0 mL phosphate buffer (0.2 M, pH 6.6) and 1.0 mL 0.1% potassium ferricyanide were incubated in a water bath (50 °C, 20 min). After 1 mL of 10% trichloroacetic acid was added, the mixture was centrifuged (3000 rpm, 10 min). The supernatant (1 mL) was mixed with 1 mL distilled water and 0.2 mL 0.3% ferric chloride, and the absorbance was measured at 700 nm. All assays were carried out in triplicate. Ascorbic acid was used for comparison.

Male Kunming mice (weighing 18–22 g) were provided by Xinglong Experimental Animal Breeding Factory (Beijing, China). The animals were allowed to acclimatize for 7 days before the experiment. They had access to a standard diet and water ad libitum and were maintained at 25 ± 2 °C, and 55% ± 5% relative humidity with a 12 h light/dark cycle. All animal studies were in strict accordance with the Chinese legislation on the use and care of laboratory animals.

The mice were randomly allocated into seven groups of eight animals each. In the normal control group and CCl4-intoxication group, animals were given a single dose of distilled water (0.2 mL) by intragastric (i.g.) gavage once daily for 10 days. The positive group was treated with bifendate (200 mg/kg in 0.5% sodium carboxymethyl cellulose, i.g.) once daily for 10 days. In the four experimental groups, the mice were pretreated with ORWP and ORAP (100 and 200 mg/kg, i.g.), once daily for 10 consecutive days. On the 11th day, all mice except those in the normal control group were given a CCl4/peanut oil mixture (1%, 5 mL/kg, i.g.) 2 h after the last administration of bifendate, ORWP and ORAP, while the normal control group received peanut oil alone. Sixteen hours later, the animals were weighed and sacrificed under light ethyl ether anesthesia. The liver was weighed and homogenized (10% w/v) in ice-cold physiological saline. The supernatant obtained after centrifugation (8000 rpm, 10 min) was stored at −20 °C. The hepatosomatic index (HI) was calculated as liver weight/body weight × 1000%.

After blood collection, serum was obtained by centrifugation (5000 rpm, 10 min). The activities of ALT and AST in the serum were measured using commercial kits, and the results were expressed as units per liter (IU/L). The activity of hepatic superoxide dismutase (SOD), glutathione peroxidase (GSH-Px) and malondialdehyde (MDA), considered as indexes of antioxidant status of liver tissues, was assayed using commercial kits, and normalized with reference to protein. The protein concentration was measured by using Bradford’s method [48].

4.7.4. Histopathological Study on the Liver

A small piece of the liver was preserved in 10% neutral buffered formaldehyde solution, processed and embedded in paraffin. Sections (4 μm thickness) were cut, stained with hematoxylin-eosin (H&E), and evaluated for pathological changes under the light microscope.

Male Kunming mice were randomly divided into five groups of 8 animals each. In the control group, mice were given distilled water by gavage. In the experimental groups, mice were given ORWP and ORAP (500 and 1000 mg/kg respectively). The animals were observed continuously in the first 24 h for any gross behavioral changes and toxic symptoms, and in the first 48 h for mortality.

All tests were performed in triplicate and the results were expressed as mean ± SD. Statistical analysis was performed using IBM SPSS Statistical software (version 20, IBM, Armonk, NY, USA) to determine the difference between the groups. A p value < 0.05 was considered to be statistically significant.

Q.L. performed the experiments and wrote the manuscript. M.Z. and X.G. collected and analysed the data. H.W. conceived and designed the study. T.B.N. revised the manuscript. 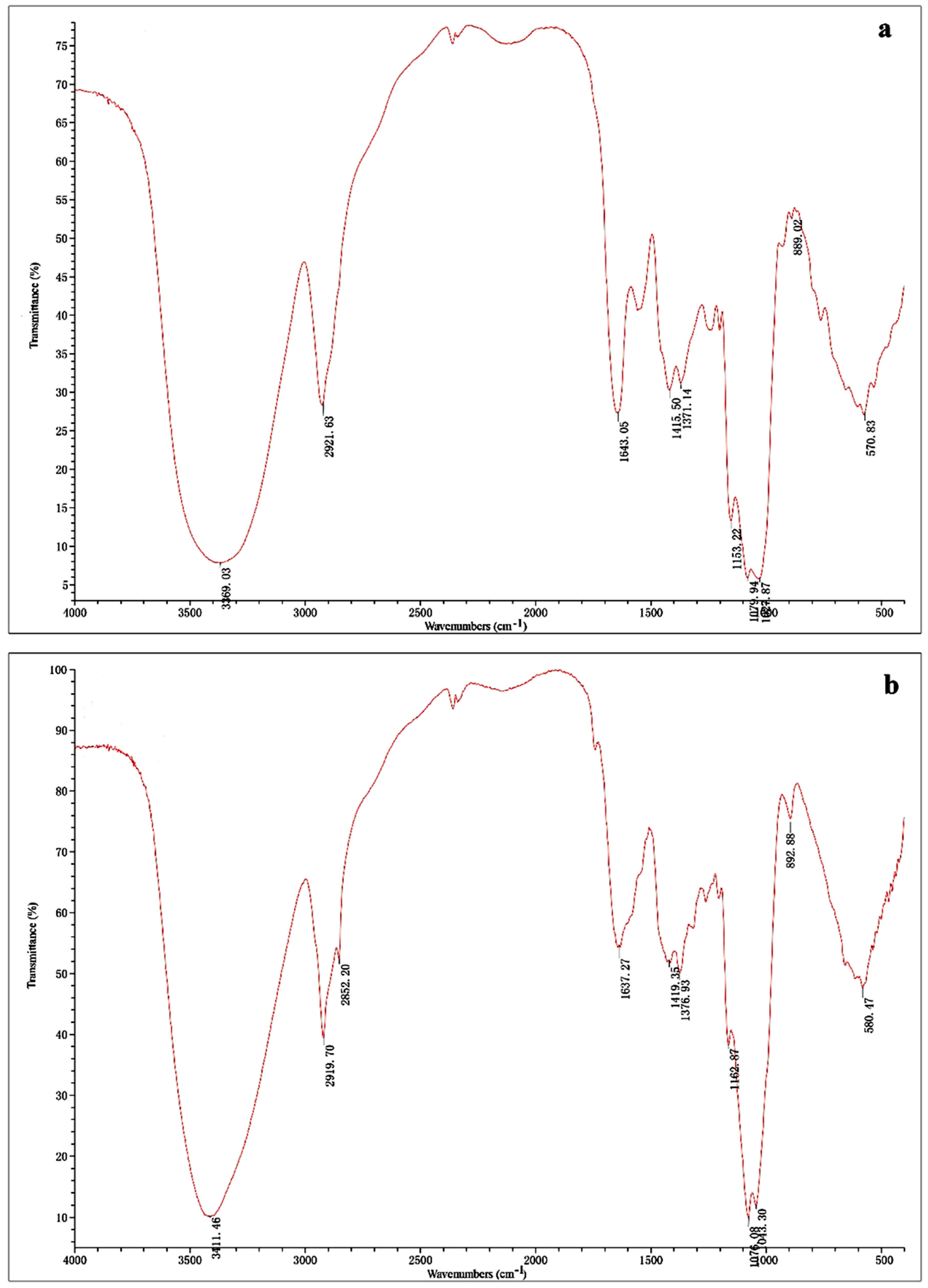 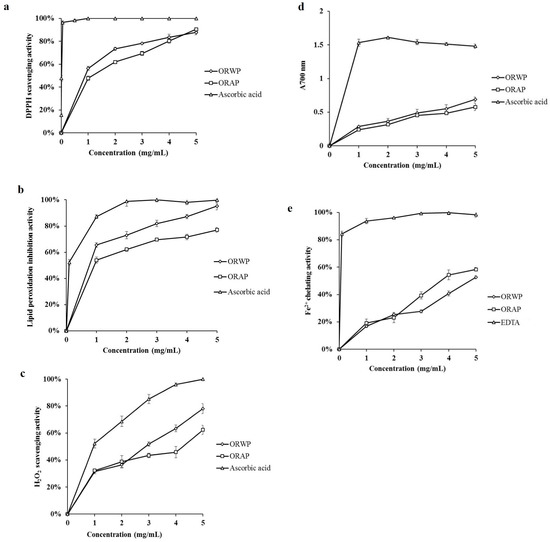 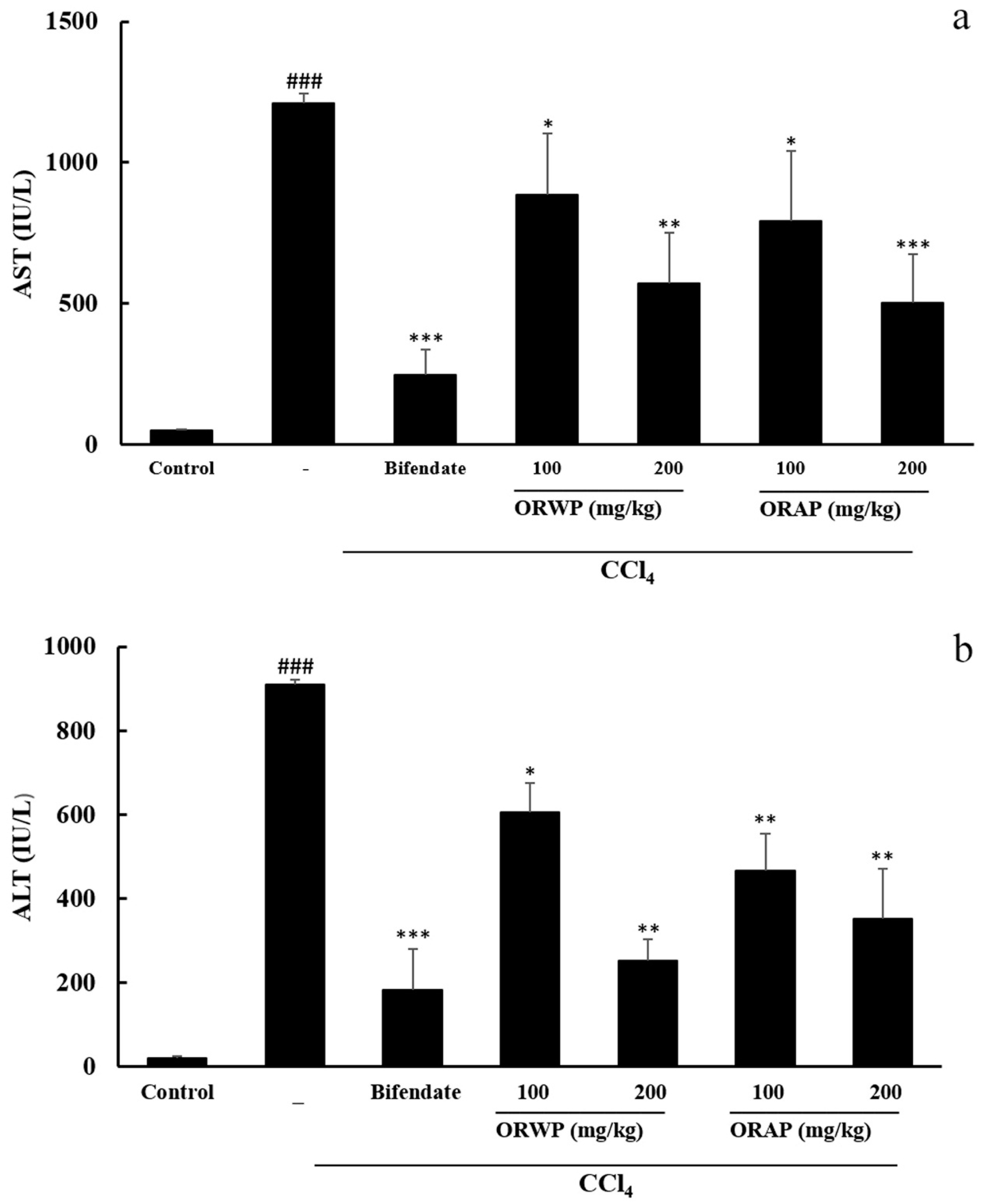 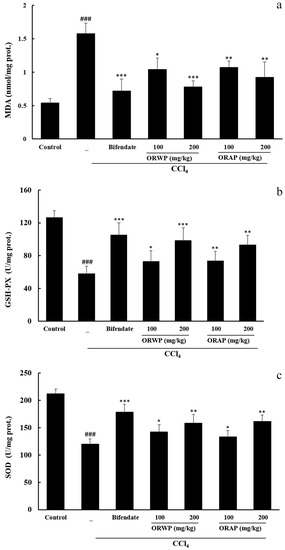 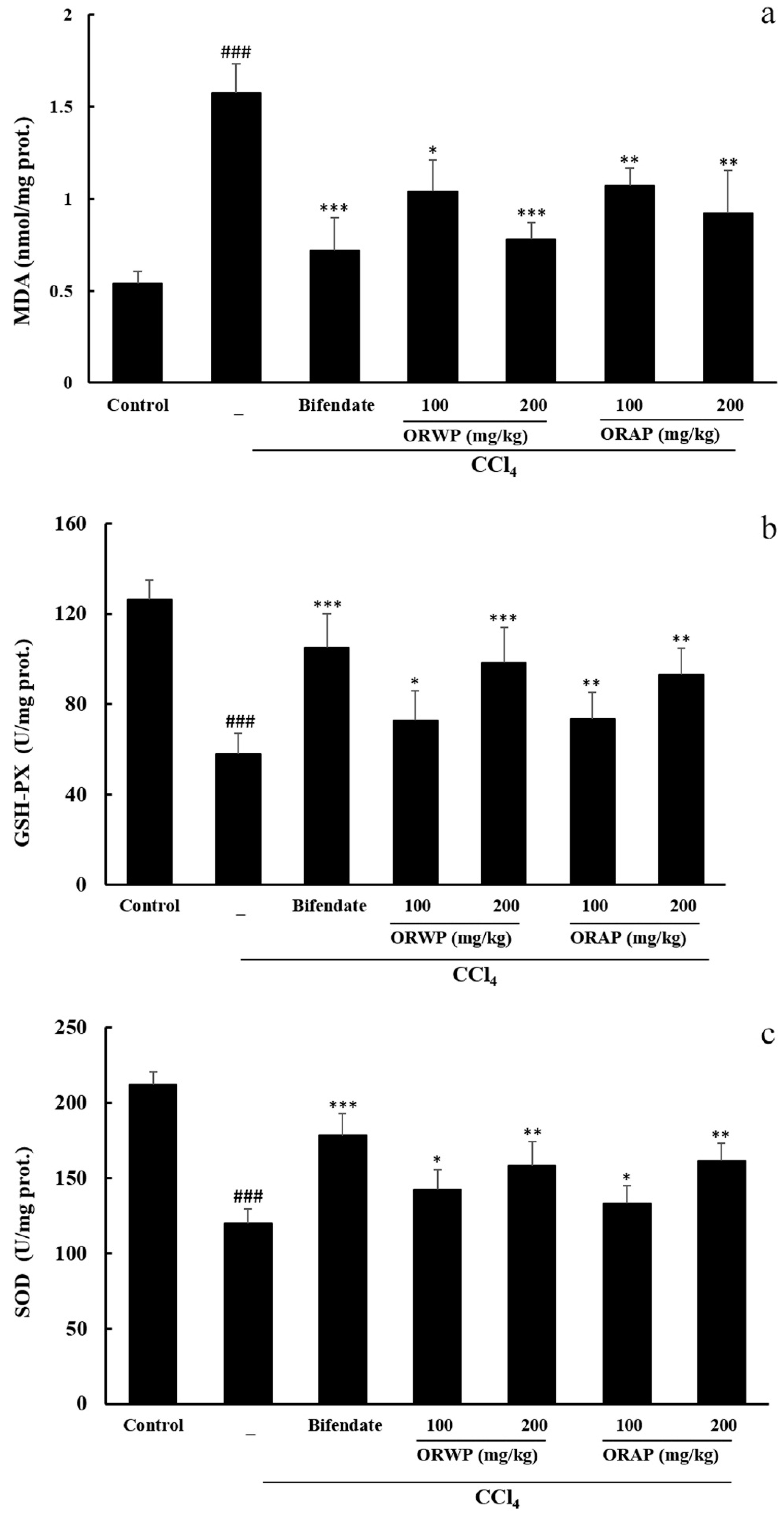