Rhinacanthus nasutus (L.) Kurz (Acanthaceae) is an herb native to Thailand and Southeast Asia, known for its antioxidant properties. Hypoxia leads to an increase in reactive oxygen species in cells and is a leading cause of neuronal damage. Cell death caused by hypoxia has been linked with a number of neurodegenerative diseases including some forms of dementia and stroke, as well as the build up of reactive oxygen species which can lead to diseases such as Huntington’s disease, Parkinson’s disease and Alzeheimer’s disease. In this study we used an airtight culture container and the Mitsubishi Gas Company anaeropack along with the MTT assay, LDH assay and the trypan blue exlusion assay to show that 1 and 10 µg mL−1 root extract of R. nasutus is able to significantly prevent the death of HT-22 cells subjected to hypoxic conditions, and 0.1 to 10 µg mL−1 had no toxic effect on HT-22 under normal conditions, whereas 100 µg mL−1 reduced HT-22 cell proliferation. We also used H2DCFDA staining to show R. nasutus can reduce reactive oxygen species production in HT-22 cells. View Full-Text
Keywords: Rhinacanthus nasutas; hypoxia; anaeropack; HT-22; antioxidant Rhinacanthus nasutas; hypoxia; anaeropack; HT-22; antioxidant
►▼ Show Figures 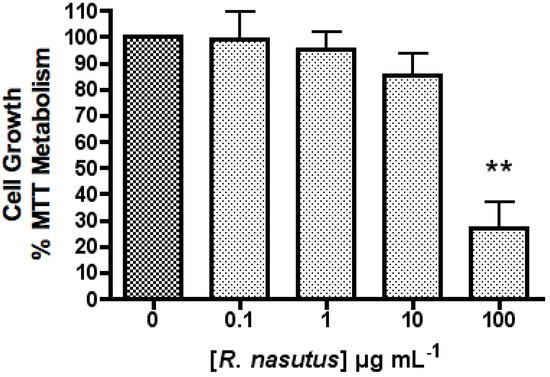