White Sponge Nevus, a Rare but Important Entity
Next Article in Special Issue

From Denture to the Final Implant-Supported Prosthesis Using a Full-Digital Protocol: A Dental Technique
Previous Article in Journal

Dental implants have been widely used in oral rehabilitation to replace one or more missing teeth with satisfactory survival rates. Although adverse biological responses and complications in prosthetic restorations can occur, such as loss of torque in screws or the fracture of them [1,2,3].
The loss or decrease in the torque of the retention screw of an implant-supported prosthesis can be caused by different factors such as a low preload on the screw, failures after initial insertion and settlement; prosthetic component and dentist-induced variables during torque [4,5].
Implant–component connections have been considered a very important factor in the success of implant treatment [2]. During chewing, there is load distribution along the implant long axis, and micro-movements can occur in these connections, contributing to the loss of torque in the screws, as well as the misfit of prosthetic restorations [5].
In the oral environment, chewing forces act on the prosthetic restorative materials promoting mechanical cyclic impulses, which can be simulated in the laboratory by mechanical cycling, which reproduces physiological conditions during chewing [6,7].
Implant and abutment manufacturers have sought to improve the design of the morse taper system to better adapt the implant–abutment interface. Thus, they developed the Indexed Morse taper system, which features an internal anti-rotational device, allowing greater stability of the set by promoting greater contact of the prosthetic component with the implant cone [8,9].
In all implant systems, the implant–component union determines the mechanical integrity, strength, and stability of the assembly. Systems with internal connection were created to minimize screw torque loss and possible fractures commonly found in external hexagons. A biconical connection mechanism effectively results in a high protection against excessive loads and reduces the screw loosening [10].
This study aimed to compare the torque maintenance capacity of two different prosthetic components and implant sequence after mechanical cycling.

For this study, 40 Indexed Morse taper (IMT) implants of 4.0 × 11.5 mm (Implacil de Bortoli, Sao Paulo, Brazil) were selected, which were divided into two groups: Group MC (mini conical prosthetic abutments) and group ST (straight trunnion prosthetic abutments). Each group has a sample of 10 specimens, with 2 implants in each body (to simulate multiple prostheses). Each body of the two groups was numbered from 1 to 10.
Twenty specimens were made, which consisted of PVC tubes with 25 mm in diameter cut into 20 equal parts of 12 mm in height. Equal parts 1:1 of the Axson polyurethane resin were mixed and placed in the barrel up to the edge. The final cure was awaited to install the implant. In this body, 2 alveoli were made using the sequence of drills indicated. The perforations were 3 mm apart and then 2 implants were installed with a manual torque wrench and 3 mm of exposed threads according to ISO 148018:2007 standard [11] (Figure 1).
Then, 20 standardized metallic frameworks were cast in Co-Cr (10 for the mini-conical trunnion and 10 for the straight trunnion). After each prosthesis was ready, the abutments were screwed (20 N-cm for MC group and 30 N-cm for ST group) with the implants already attached, forming the implant–abutment–prosthesis set (Figure 2).
The specimens from each group were positioned with a 30° inclination of the implant in relation to the ground (ISO 14801:2007) [11]. Each group was placed in the Erios Mechanical Fatigue Simulator and a 60-mm tip was placed over each sample with a load of 250 N and frequency of 4 Hz, in the axial direction. The specimens were subjected to 2 × 106 cycles. After the cycling period ended, the screw loosening torques were measured in both groups with the digital torque wrench Instrutherm TQ-680. Data were statistically analyzed using two-way ANOVA with α  =  5% and Tukey test, considering the presence or absence of mesh (Minitab Inc., State College, PA, USA).

The descriptive statistics obtained in the experiment are represented in Figure 3.
Each of the abutments was checked for the condition of retaining the prosthesis. This condition was evaluated at the initial step of abutment installation (preload), after 10 min to respect the screw elastic recovery and after aging due to mechanical fatigue (Torque loss). As both abutments are indicated for fixed prosthesis of several elements, two implants were installed per specimen and the measurements were verified in each one of them. The implant 1 was the first to be tightened and the first to be measured in all conditions and the implant 2 was the second one measured in the sequence. In this study, the implant sequence was considered as an analysis factor during the statistical approach (Table 1, Table 2 and Table 3).
Therefore, both abutments tested are equally capable of maintaining the torque of the prosthetic screw, even after chewing simulation.

The present study compared the screw removal torques of mini-conical prosthetic components and straight trunnion of Indexed Morse taper implants, after mechanical cycling.
When torque is applied to the prosthetic screw, a preload is generated inside the screw which is nothing, but a frictional tension generated by the tightening between the screw threads and the implant’s internal threads, and between the screw head and the abutment. This preload promotes the stabilization of the implant–abutment assembly and is proportional to the applied torque [11].
One mechanism that results in screw loosening right after the initial torque of prostheses on implants is the settling effect. This effect, which plays a critical role in screw stability, is the result of the presence of micro-roughness on the screw surface and the surface of the internal threads of the implants. Due to these uneven surfaces, no two surfaces are completely in contact with each other. The laying process takes place as there is a slight wear of the components, causing the two surfaces to come closer together. As a result, there is a 2% to 10% reduction in the preload value in the first minutes after the initial torque [12,13,14].
Because of this preload loss soon after the initial torque application, it is recommended to tighten the abutment screw 10 min after the initial tightening [15].
The internal connection and abutments with anti-rotational and tapered designs have better resistance to screw loosening. Factors such as crown–implant ratio, presence of cantilevers, and occlusal overload increase the risk of screw loosening. To reduce the possibility of crown failure due to screw loosening, it is recommended to carry out frequently follow-ups and to retorque the prosthetic screw one month after the initial torque [15,16,17].
The retorque allows for an increase in the stability of the union between the screw and the prosthetic component, and this step is indicated for both single and multiple prostheses [18].
The higher the screw torque, the smaller the formation of micro gaps at the implant-abutment interface, but the greater the residual stress, which reduces the fatigue life of the implant. To reduce this tension, the use of systems with a larger contact surface between the implant and the prosthetic abutment is indicated. [2].
In the present study, the screws were torqued to 10 N-cm and after 10 min they were retightened with the initial torque. In this study, the ISO 14801:2016 standards for dynamic fatigue testing for endosseous dental implants were followed. The standard stands up that the specimen must be fixed at a distance of 3.0 mm from the bone level in order to simulate the reabsorption of the peri-implant tissue, and during mechanical cycling, present an inclination of 30° in relation to the ground [11].
In the oral cavity, chewing forces act on prosthetic restorations, promoting mechanical cyclic impulses, which can be simulated in the laboratory by the mechanical cycling machine, which simulates the physiological conditions during mastication. As for the fatigue test, in this study, 2,000,000 cycles were chosen, which simulates approximately 5 years of chewing function [7].
This study compared two different abutments (straight and mini-conical trunnion) of the same type of implant connection (Indexed Morse taper). Despite not showing statistically significant differences, the straight trunnion abutment had a small advantage with regard to screw torque loss when compared to the mini-conical, obtaining values similar to those in the literature [19]. Regardless of the type of abutment, the aging factor through mechanical cycling considerably affected torque loss, which corroborates previous studies [20,21,22].
The initial decrease in torque occurs naturally and is related to the friction caused by the prosthetic screw and the internal walls of the implant. The loss of torque after the fatigue test can be caused by micromovements of the prosthetic components due to the loads received on the prosthesis. Even after the settlement effect, it is possible that there is micro-roughness on the surfaces of the components that, with the incidence of loads, can result in wear and, consequently, the loss of preload, causing the screw to loosen [23].
A factor that helps to maintain the torque of the retaining screw is the union of the crowns. When there is a single crown, all the load that is applied falls directly on the abutment and then into the implant and supporting bone tissue. The most affected component is the retention screw, which in many cases causes loosening or even fracture. In joint crowns, on the other hand, the stress distribution occurs more uniformly, causing lower stress concentrations on the prosthetic screw and reducing the chance of loosening and failure of the prosthesis [1,2,24].
Although the results showed that there are no statistical differences in screw torque loss when comparing mini conical and straight trunnion abutments, the use in clinical practice must be evaluated with awareness. Even with the standardization of the tests performed in this in vitro study, there are still limitations as the use of crowns with simplified anatomy, load applied in a single location and in the same direction, absence of conditions similar to the oral environment, such as temperature variation and saliva presence, and new laboratory, and clinical trials that must be performed to assess the retention screw removal torque in different types of prosthesis after aging, antagonist materials, and temperature variation to improve the understanding of this topic.

Concerning the specific implant tested, it can be concluded that there were no differences to the screw removal torque when comparing mini conical abutments and straight trunnion for Morse taper implants. In addition, the implants tightening sequence did not affect the torque level when two-element splinted prosthesis is considered. 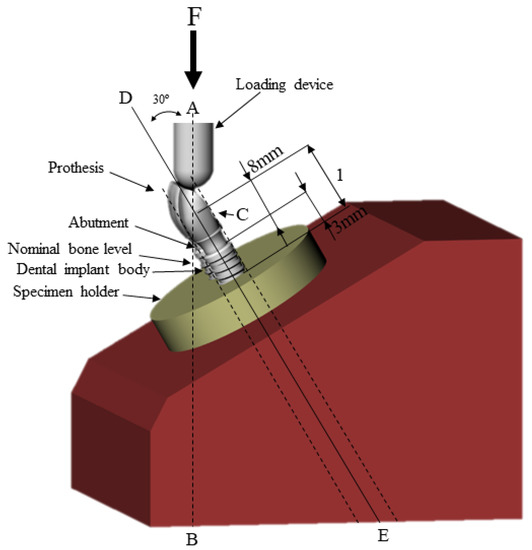 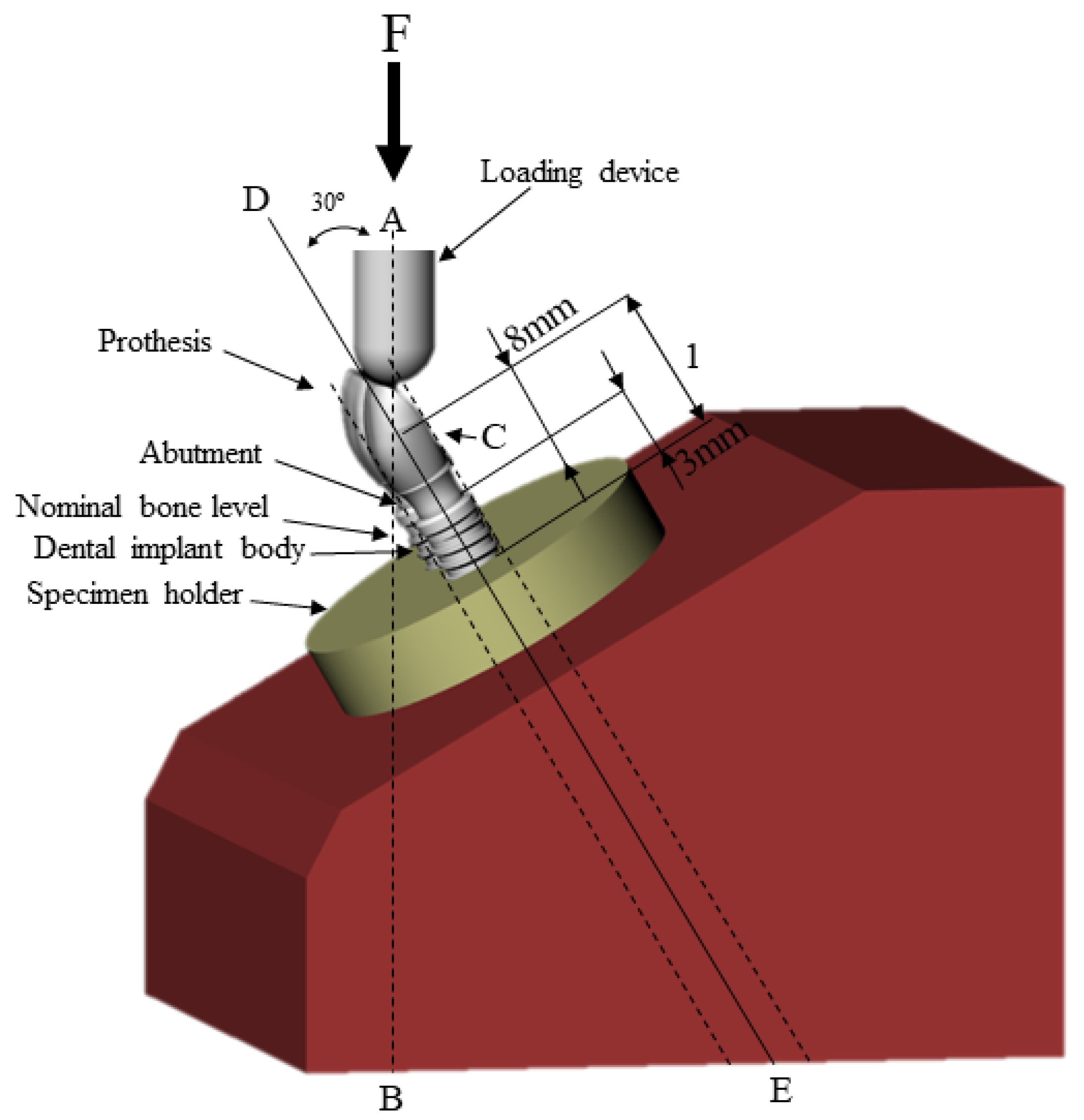 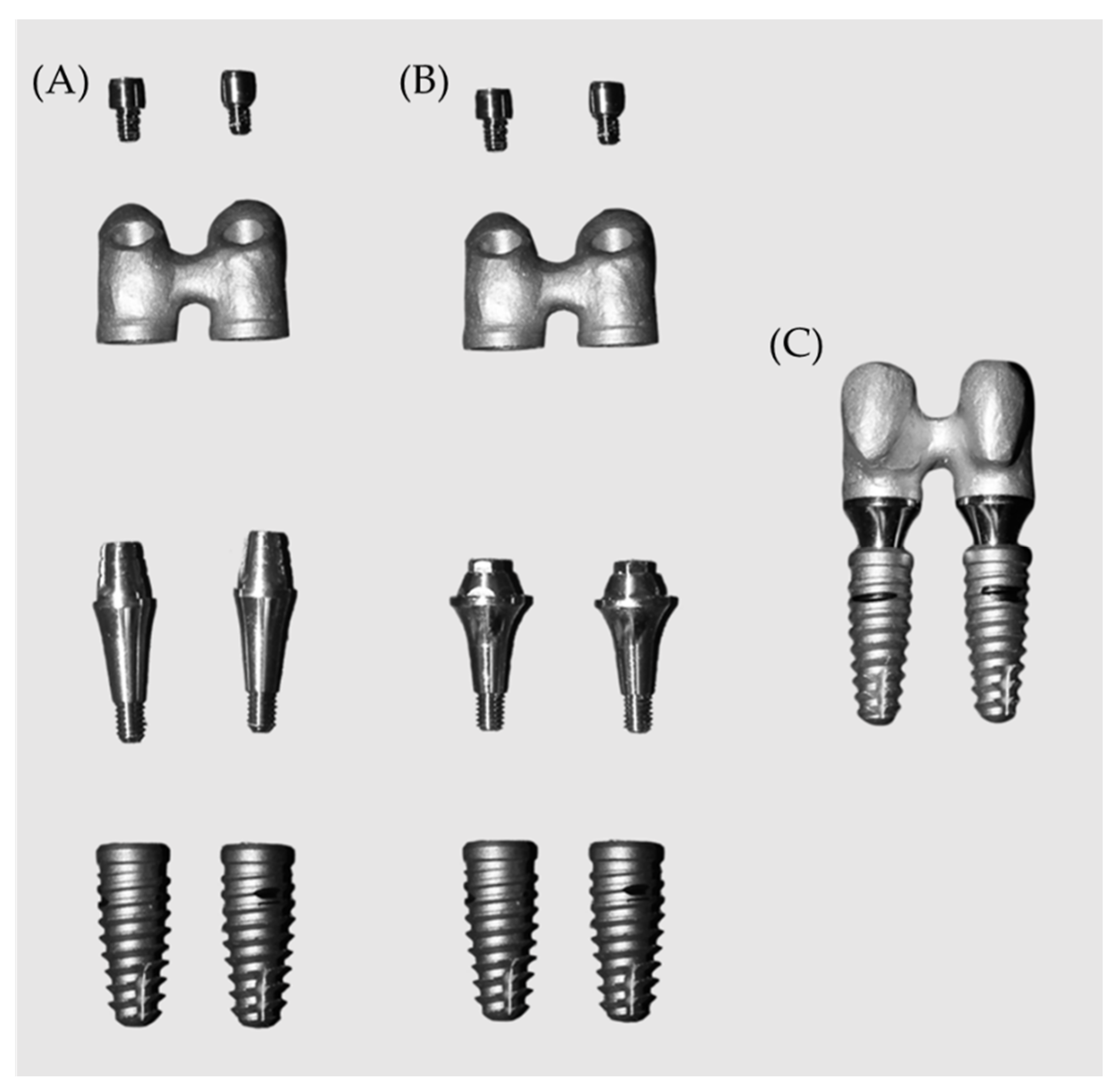 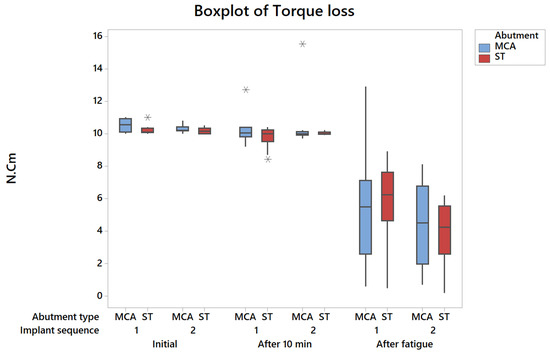 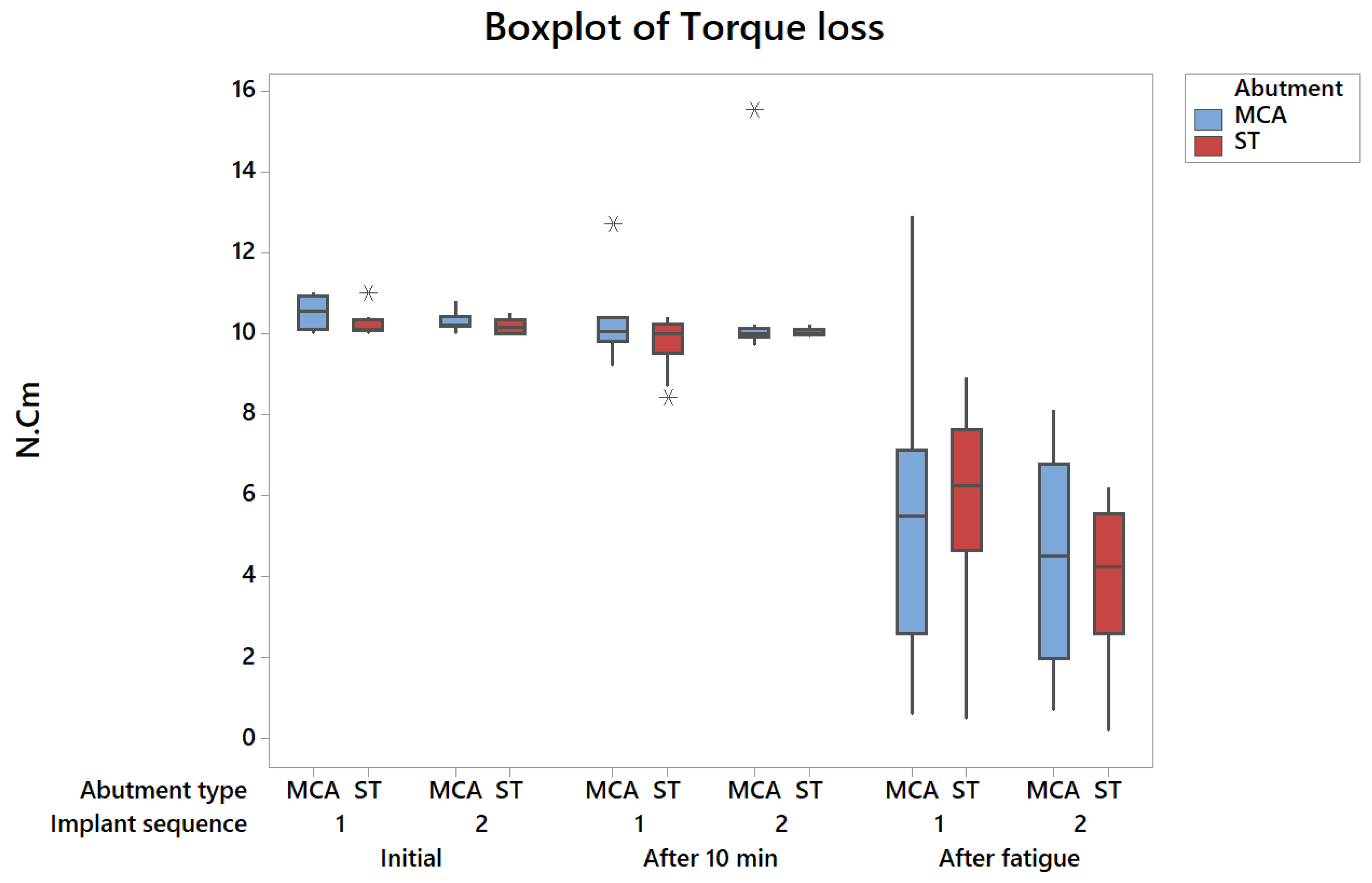