The biggest problem facing the world now is the climate emergency, and it has been ignored for decades. Professor Raymond Pierrehumbert’s words stress the crucial situation: “Let’s get this on the table right away, without mincing words. With regard to the climate crisis, yes, it’s time to panic. We are in deep trouble.” [1] Ice melts by billions of tonnes and this leads to a rise in the sea levels all over the world (sea levels are rising about three millimetres a year); as a result, many coastal cities will be partially or totally underwater between 2030 and 2040 [2,3]. Rainforests burned at a record rate and estimates showed that about 20% of the oxygen produced by the Earth’s land comes from the Amazon rainforest. Moreover, climatic emergency is one of the main reasons of flood risk [4]; it could concentrate the hydrological cycle, which causes more intense rainfall, leading to increased frequency and severity of floods. (In the UK, the rainfall in 2015 broke records, receiving 341 mm within one day, breaking the 2009 record of 316.4 mm). Floods not only caused structural damage in roads, sewage treatment plants, and energy supplies, but they also caused economic losses—for example, flood damage costs the UK £1.3 billion every year [5].
Pervious concrete could mitigate flood runoff effects. A pervious or porous concrete is capable of capturing water on the surface and then allowing it to infiltrate into the subgrade layer and groundwater, which is one of the best storm water management systems [6]. The main difference between the traditional concrete and the pervious concrete mixes is eliminating or using a small fraction of fine aggregate which is responsible for the high porosity and void ratio. The strength of pervious concrete is affected by various factors (strength mainly depends on the bonding between cementitious paste and aggregate particles) including the cement content, water-to-cement ratio, type and level of compaction, and the quality and the gradation of used aggregates. The key factor of optimization of pervious concrete mix design is the balance between the strength and permeability [7,8]. The porosity of concrete is the reason for its permeability; the higher the porosity, the higher permeability which is defined by the infiltration rate test [9]. However, increasing the porosity of the mixture negatively affect the compressive strength of concrete [10]. Despite the benefits of pervious concrete, the clogging issue represents an important limitation for pervious concrete from a hydrologic perspective—for example, silt, clay-sized materials, algae, and plant roots, which block the pores created in the previous concrete leading to a reduction on the voids ratio and, consequently, the permeability of the concrete. Clogging also reduces the effective service life and impedes the widespread application of pervious concrete [11,12].
On the other hand, the Earth is running out of natural resources. One way to overcome this issue is recycling the waste materials into existing industries to replace the natural resources. Waste plastic and recycled rubber are considered the most abundant waste materials generated globally. Waste plastic increases from only two million tonnes annually in 1950 to about 381 million tonnes in 2015, and account for 12% of the world total municipal waste annually in 2016 [13,14]. In 2005, about 10 billion rubber tires were generated worldwide. In the US, four million tonnes of waste tires are generated every year [15]. The problem is that these wastes can potentially take over a hundred years to break down when deposited in landfill sites [16]. Another serious issue is that the plastic and rubber wastes end up getting dumped in the globe’s oceans. Polluting oceans can have catastrophic effects on marine life and ecosystems, all of which are essential for a balanced and functioning planet [17]. However, we can lessen the negative effect of that waste by incorporating it in various industries.
Many researchers have studied various types of waste materials to be used as an alternative to natural aggregates in concrete. For example, recycled aggregate from demolished concrete [18,19,20], recycled rubber tires [21,22,23], post-consumer glass [24,25], steel slag by-products [26,27,28,29], and recycled waste plastic [30,31,32,33,34,35,36,37,38]. Using waste plastic aggregate on concrete has been evaluated in many studied. Rahim, N.L. et al. replaced the coarse aggregate with high-density polyethylene (HDPE) by 10%, 20% and 30%, and the results showed that increasing the waste plastic replacement decrease the compressive strength by 6%, 19%, and 35%, respectively [39]. Azad A. Mohammed et al. studied the effect of using plastic waste from PVC waste sheets to partially replace coarse aggregate or fine aggregate up to 85%. The results indicated a significant decrease in the compressive strength from 41.5 to 16.4 MPa for 85% fine aggregate replacement and from 41.5 to 8.3 MPa for 85% coarse aggregate replacement [35]. For all studies, it was reported that using waste plastic aggregates decreased the compressive strength of the manufacturing concrete [40,41,42,43,44,45]. The relation between the increasing of infiltration rate and the decreasing of compressive was also reported.
Researchers also studied the effect of using recycled rubber on the properties of concrete. Sanjeev Kumar et al. studied various sizes of discarded tyre rubber (from powder to 4 mm) as aggregates replacement at different levels (from 2.5% to 20%) with different water-to-cement (W/C) ratios. Compressive strength for all mixes decreased with the addition of discarded rubber; with replacing 20% of rubber, the values declined from 33, 30, and 26.5 N/mm2 to 20, 20, and 17 N/mm2 with 0.40, 0.45, and 0.50 W/C, respectively [46]. Hanbing Liu et al. used two types of waste crumb rubber as coarse and fine aggregates with four replacement levels (2%, 4%, 6%, and 8%), and the compressive strength results at 8% replacement decreased by 34% with coarse aggregate replacement, while with fine aggregate, it was 11%. A slight decrease in the permeability coefficient was also reported [47]. Eshmaiel Ganjian et al. replaced the coarse aggregate with scrap tyre rubber by 5%, 7.5%, and 10%. The strength lost 21% by replacing 10% of scrap rubber, while the permeability increased by 150% [48].
The main purpose of this study was to investigate the effect of using waste plastic and/or recycled rubber as a coarse aggregate replacement on the compressive strength and permeability of pervious concrete.

Ordinary Portland cement was used in this study while satisfying ASTM C150 [49] requirements (Table 1 shows the chemical composition of cement). Natural sand was used as a fine aggregate. Clean crushed dolomite was used as a coarse aggregate, waste plastic (WP) was used after it had been shredded, and recycled rubber (RR) was used with different sizes as shown in Figure 1. Table 2 shows the properties of natural aggregate and waste plastic used in the mixes.

Absolute volume method was used to calculate the mix design. 15 mixes were prepared with various replacement of gravel by waste plastic and/or recycled tire rubber aggregates (5%, 10%, 15%, 20%, and 25%) by weight to investigate the effect of waste aggregates on the pervious concrete properties (compressive strength and permeability). Table 2 showed the components details of mixes. The control mix was prepared with natural coarse aggregates to act as a reference mix.
Concrete components were weighed out and put into plastic bags ready to be added to the mix. Cement and sand were mixed dry for 3 min, then water was gradually added. The coarse aggregates (gravel, waste plastic, and/or recycled rubber) were added and mixed until the desired consistency was reached. The mix was then added to the moulds in three stages; each time, the sample was consolidated using a tampering rod. Samples were left to sit for 72 h; then, they were demoulded and cured in water at the room temperature until the test date as shown in Figure 2. The cement, sand, and water content were the same for all mixes. Table 3 shows the mixture’s constituents for each mix.

21 × 11 × 6 cm cubes were used to determine the compressive strength in accordance with ASTM C39 test [50], while for measuring the permeability of the pervious concrete, the infiltration rate test was conducted in accordance with ASTM C1701 [51]. The tests used an infiltrometer with a single ring under a constant water head and pre-wetting with 3.60 kg of water. The amount of water used in the actual infiltration test depended on the pre-wetting time. 18.0 kg of water were used in the case of the pre-wetting time under 30 s, while 3.6 kg were used if the time was above 30 s. Figure 3 shows the infiltration rate test. The following formula is used to calculate the infiltration rate: where I = infiltration rate (mm/s), K = constant, 4.583 × 109 in SI units, M = mass of the water (kg). D2 = inside diameter of the perimeter (mm), and t = time for the body of water to infiltrate the pervious concrete (PC) sample (second).

Table 4 represents the values of infiltration rate test for each mix. The results showed a significant increase in the infiltration rate, as the value jumped from 0.31 cm/s to 0.57 cm/s with 25% waste plastic replacement, which is about 84% higher than the control mix. Increasing the percentage of replacement of coarse aggregate with plastic waste in concrete increases the permeability as shown in Figure 4. This could be attributed to the shape and the smooth surface of waste plastic aggregate, which creates a continuous pathway between pores and increases porosity. Additionally, the insufficient compaction due to the low density of plastic waste causes more pores [52].
The infiltration rate values for concrete using recycled rubber as a coarse aggregate were illustrated in Table 5. An increasing trend was observed at all level of replacement. The value increased to reach its peak at 15% replacement from 0.31 cm/s to 0.50 cm/s with a 61% increase from the control mix. However, increasing the replacement above 15% led to a decrease in infiltration rate (0.32 cm/s with 25% replacement). Overall, using recycled rubber as coarse aggregates increased the permeability of concrete mixes as shown in Figure 5. This could be due to the weak pond between recycled rubber aggregate and cement matrix, and the associated micro cracks which lead to interfacial gap voids. The non-absorbent nature of the rubber surface and the difference in modulus of elasticity between cement paste and rubber aggregates plays a vital role in the pond on interfacial transition zone [53]. The author suggests that the decrease occurred when replacement exceeded 15% could be attributed to the accumulation of the cement paste creating impermeable spots as shown in Figure 6. This could affect the permeability of the pervious concrete as Suleiman, M. T. et al. reported [54].
Table 6 showed the infiltration rate values for concrete blended with both waste plastic and recycled rubber as a coarse aggregate. Results showed a linear relationship between the replacement percentage and the permeability, as increasing the waste aggregates increased the permeability of the pervious concrete mixes and this trend aligned with the previously reported trends. Figure 7 indicates that permeability increased by 68% with 25% waste aggregates replacement.

In this research study, the effect of replacement of a natural coarse aggregate with waste plastic and/or recycled rubber (5%, 10%, 15%, 20%, and 25%) was studied on the compressive strength and permeability of pervious concrete, and the following conclusions were made:

Methodology, S.A.; investigation, L.C.; writing—original draft preparation, R.B.; writing—review and editing, S.A. All authors have read and agreed to the published version of the manuscript. 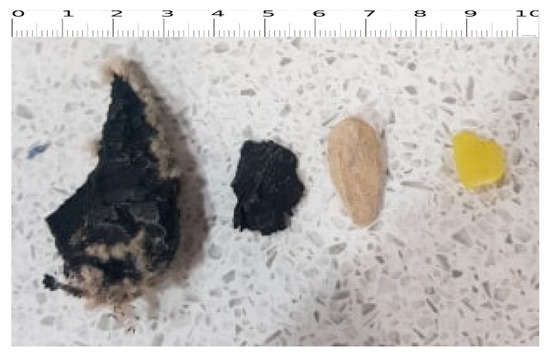 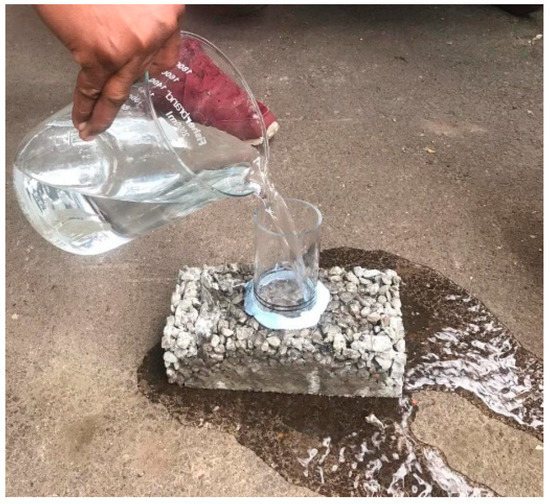 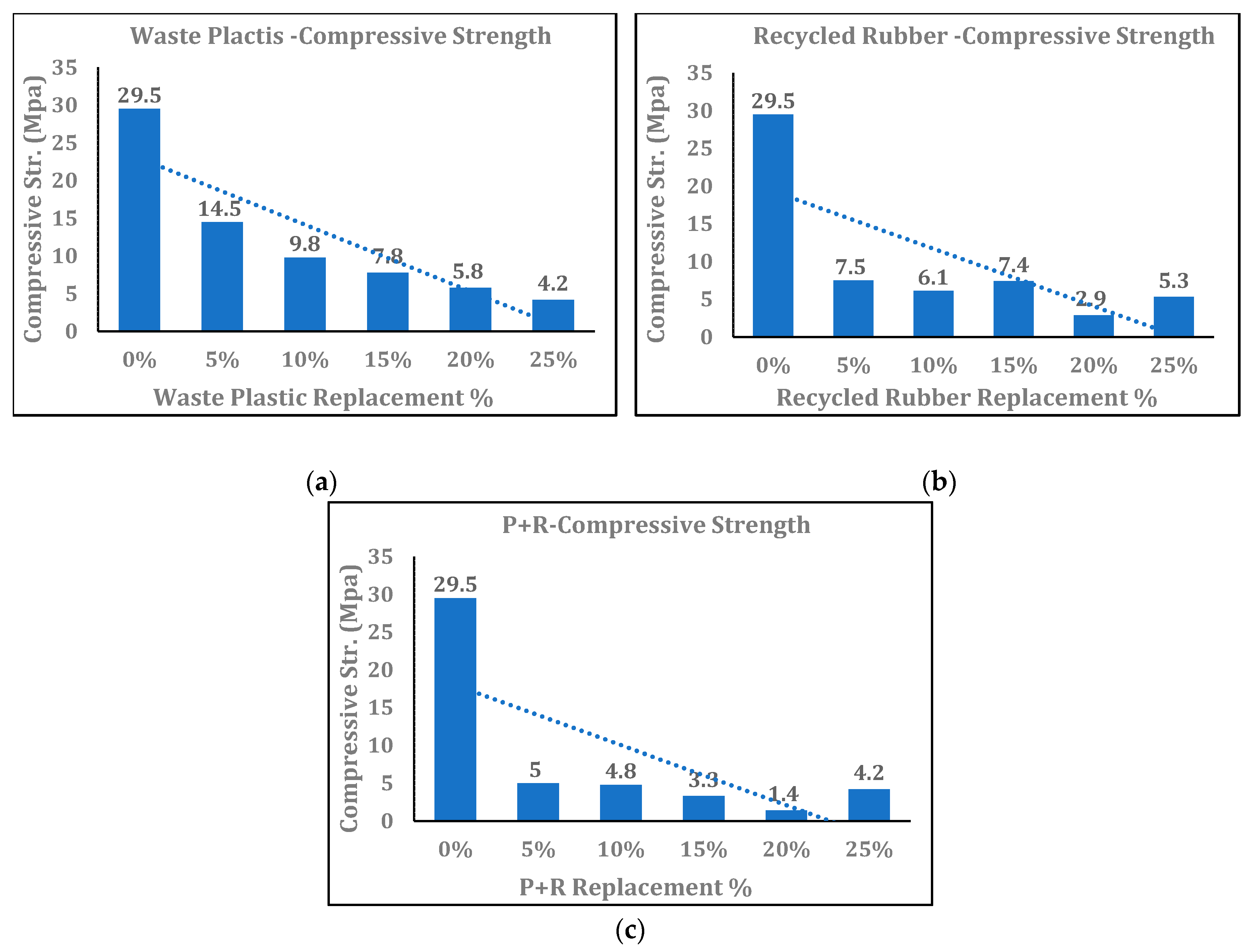 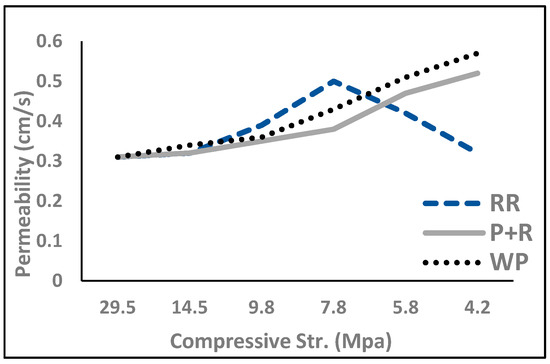