Environmental and Economic Assessment of Portable Systems: Production of Wood-Briquettes and Torrefied-Briquettes to Generate Heat and Electricity

:
Soot is characterized by a multiscale structural organization; the only diagnostic tool that can give access to it is the transmission electron microscope (TEM). However, as it is a diffraction-based technique, TEM images only conjugate aromatic systems and, thus, it is particularly useful to combine it with electron energy-loss spectroscopy (EELS), which is able to provide quantitative information about the relative abundance of sp3 and sp2 hybridized carbon. In this paper, a method for the EELS spectrum analysis of carbonaceous materials, recently developed for electron-irradiated graphite and glassy carbon composition analysis, has been applied for the first time on soot samples, in order to test its performance in soot nanostructure study in combination with TEM and high-resolution TEM (HRTEM). Soot samples analyzed were collected in the soot inception region of premixed flames of different hydrocarbon fuels. EELS, in agreement with TEM and HRTEM, showed a quite disordered and heterogeneous structure for young soot, with a relatively low sp2 content and slight presence of fullerene-like structures, more evident in the case of methane soot hinting to the effect of more saturated aliphatic fuels on soot characteristics at soot inception.
Keywords:
soot; TEM; HRTEM; EELS; soot nanostructure; premixed flames

Soot research is important given the effect of soot emission on climate change and environmental issues. However, its characterization is a very difficult task due to complex structure and nanometric size of the soot particles. In particular, soot is characterized by a multiscale organization and cannot be considered neither wholly crystalline, nor amorphous. Soot is composed of three-dimensional aggregates, consisting of complexly branched chains of spherical primary particles, which in turn are composed of concentrically arranged carbon layers. These layers are parallel to each other with interplanar distances higher with respect to that of graphite (about 0.335 nm), featuring a structure at the atomic scale corresponding to a turbostratic, i.e., biperiodic, stacking of a few nanometer-sized layers [1].
Due to this characteristic multi-scale organization, soot can be clearly distinguished from other carbon solid particles when observed by transmission electron microscopy (TEM). TEM, indeed, is the only diagnostic tool giving access to the soot multi-scale organization and especially nanostructure, which can be explored by the high resolution mode of TEM (HRTEM), measuring structural parameters through mathematical approaches for image analysis [1]. However, it should be emphasized that this technique has significant limitations, such as being labor-intensive, having limited statistics, and being limited by the loss of most of highly volatile species [2]. Moreover, being a diffraction-based technique, TEM images only aromatic systems whereas does not “see” sp3 bonding. While TEM imaging focuses on the inelastic interaction of the primary beam electrons with the electrons from the sample, inelastically scattering electrons can be measured by electron energy-loss spectroscopy (EELS). The analysis of the energy distribution of electrons that have come through the specimen reveals a wealth of chemical and electronic state information. For this reason, it is particularly useful to combine TEM with EELS [3].
Various carbonaceous materials, such as crystalline graphite, amorphous carbon, diamond-like carbon (DLC) films and fullerenes, as well as nanotubes, have been analyzed by EELS, making it possible to characterize differences in their structure and the relative abundance of sp3 and sp2 hybridized carbon [4]. This approach has already been proved to give interesting insight in soot composition and evolution during its formation and growth [5] and oxidation [6]. Indeed, EELS has been numbered among the spectroscopy-based techniques that are more useful to trace soot maturation [7]. The spectrum of high energy losses shows values corresponding to the excitations of electrons from the localized orbitals of the sample to the unoccupied, delocalized orbitals with energy higher than the Fermi level. The K line of absorption edge for carbon is close to about 285 eV. It has a complex shape, in which several components can be distinguished:
In addition, two other components (G4 and G5 bands at approximately 287 and 289 eV, respectively) can be indicated, related to the presence of heteroatoms (oxygen or hydrogen) or the presence of carbon atoms connected by a sp2 bond, but not forming planar layers (e.g., fullerene-like structures) [8,9]. In particular, Nyberg et al. [10] found that C-K absorption spectra of C60 and C70 fullerenes consist of double-peaked π* component. Therefore, as reported also by other authors, shoulder on the high energy side of the 1 s to π* peak centered at 287 eV (G4 bands) was attributed to non-planar sp2 bonds [11,12].
By analyzing the energy of inelastic scattered electrons (loss of electron energy after passing through the analyzed sample), one can obtain information on the chemical composition (electronic structure). For carbon, the core shell electrons can scatter only to the unoccupied antibonding σ* and π* states. The intensities of the transitions from 1 s to π* (∼285 eV) and 1 s to σ* (∼292 eV) are proportional to the density of states (π* and σ*) and can thus be used to calculate sp2 and sp3 content [4,13] and to follow soot graphitization process [5].
In this paper, a method for the EELS spectrum analysis of carbonaceous materials recently developed for electron-irradiated graphite [8] and glassy carbon [14] composition analysis has been tested for the first time on soot samples. The article reports the results obtainable from a combined use of TEM, HRTEM, and EELS with this method on test soot samples, collected in premixed flames with different hydrocarbon fuels. The innovation of the method lies in the possibility to retrieve important information on the amount of planar sp2 and non-planar fullerene-like sp2 bonds, going beyond the identification of the sp2 hybridization degree.

Carbon particulate matter was thermophoretically sampled from laminar premixed flames. An ethylene flame and a methane flame (ethylene 3.0; methane 4.5 and oxygen 2.5, SOL S.p.A.) were produced on a McKenna burner (Holthuis & Associates) at the same cold gas velocity (4 cm/s) and different equivalent ratios (φ), 3 and 2.4, respectively, producing similar maximum flame temperatures (1670 K and 1650 K, respectively). The mass flow rates were controlled by gas flow was controlled by Bronkhorst mass flow controllers (HI-TEC Type F201AC). Carbon particulate matter was collected at 8 mm of height above the burner in both the flames to collect young soot, i.e., soot just after soot inception region at its maximum formation rate [5,15,16].
The samples were named in the paper ETI8 and MET8, referring to young soot from ethylene and methane flame, respectively.
Thermophoretic sampling was carried out by fast insertion of a glass plate (75 × 25 × 1 mm), inserted horizontally and rotating by a gear motor with a rotation speed of 1.4 gear/s. The insertion/deposition time of the plate was regulated at 60 ms per lap to avoid the plate heating [16]. The insertions were repeated continuously many times reaching the total deposition time for each sample of 25 s.
A scheme of the burner with the system for the thermophoretic sampling is reported in Figure 1. More experimental details are reported in a previous paper [16].
Carbon particulate samples were scratched from the glass plate and extracted with dichloromethane (DCM, CH2Cl2) (Sigma Aldrich, USA by Merck group, Darmstadt, Germany, purity > 99.9%) for separating organic species (soluble in DCM) from solid carbon particles insoluble in DCM, referred to as soot.
Samples for TEM, HRTEM, and EELS studies were made by dispersing a small amount of soot in ethanol (CH3OH, Sigma Aldrich, USA by Merck group, Darmstadt, Germany, purity > 99.8%). A drop of this dispersion was then applied to a microscopy copper grid covered with a lacey carbon layer. TEM studies were performed on S/TEM Titan 80–300 microscope from (FEI, Hillsboro, OR, USA), operating at 300 kV. The EELS spectra were acquired in the same microscope, operating at 80 kV and equipped with a Gatan Tridiem 863 spectrometer (Gatan, Pleasanton, CA, USA). For EELS analysis, relatively large volumes of the material (approx. 50 nm × 50 nm) were subjected.
For such volumes, the carbon layers are anisotropically arranged (in all directions, there is no privileged orientation). An EELS energy resolution, measured as the full width at half maximum (FWHM) of the Zero Loss Peak (ZLP), was 1.8 eV. Energy loss spectra were recorded in two ranges: low energy losses (<50 eV) and core loss (270–360 eV). Six spectra were recorded for each sample. For spectral deconvolution, the FITYK program was used [17].

In this paper, a method for the EELS spectrum analysis of carbonaceous materials recently developed for electron-irradiated graphite and glassy carbon composition analysis was tested for the first time on soot samples. The EELS results were compared to TEM and HRTEM observations.
The feasibility of quantitative EELS for evaluating the contribution of sp2 and sp3 bonds to soot nanostructure, distinguishing also between planar sp2 and non-planar fullerene-like sp2 bonds, was demonstrated.
EELS, in agreement with TEM and HRTEM, showed a somewhat disordered and heterogeneous structure for young soot, with a very low effect of more saturated aliphatic fuels as methane on the disorder and sp2 content of soot structure. As soot is an sp2-rich aromatic disordered carbon, significant differences in terms of sp2 content for soot collected at the same stage of maturation were not expected. Anyway, the present method is able to retrieve important information on the amount of planar sp2 and non-planar fullerene-like sp2 bonds, going beyond the identification of the sp2 hybridization degree. Thus, the effect of fuel chemical nature on soot, in terms of higher curvature in the structure with higher saturation degree, was put in evidence, even if it is slight.
Future work was planned for extending investigation on soot sampled at the exhaust and soot formed from different fuels (aromatics, oxygenated and so on), in order to check the reliability of the technique for correlating soot emission to its source. Pinpointing the exact sources of the pollution is important for policymakers working on addressing the pollution problem. 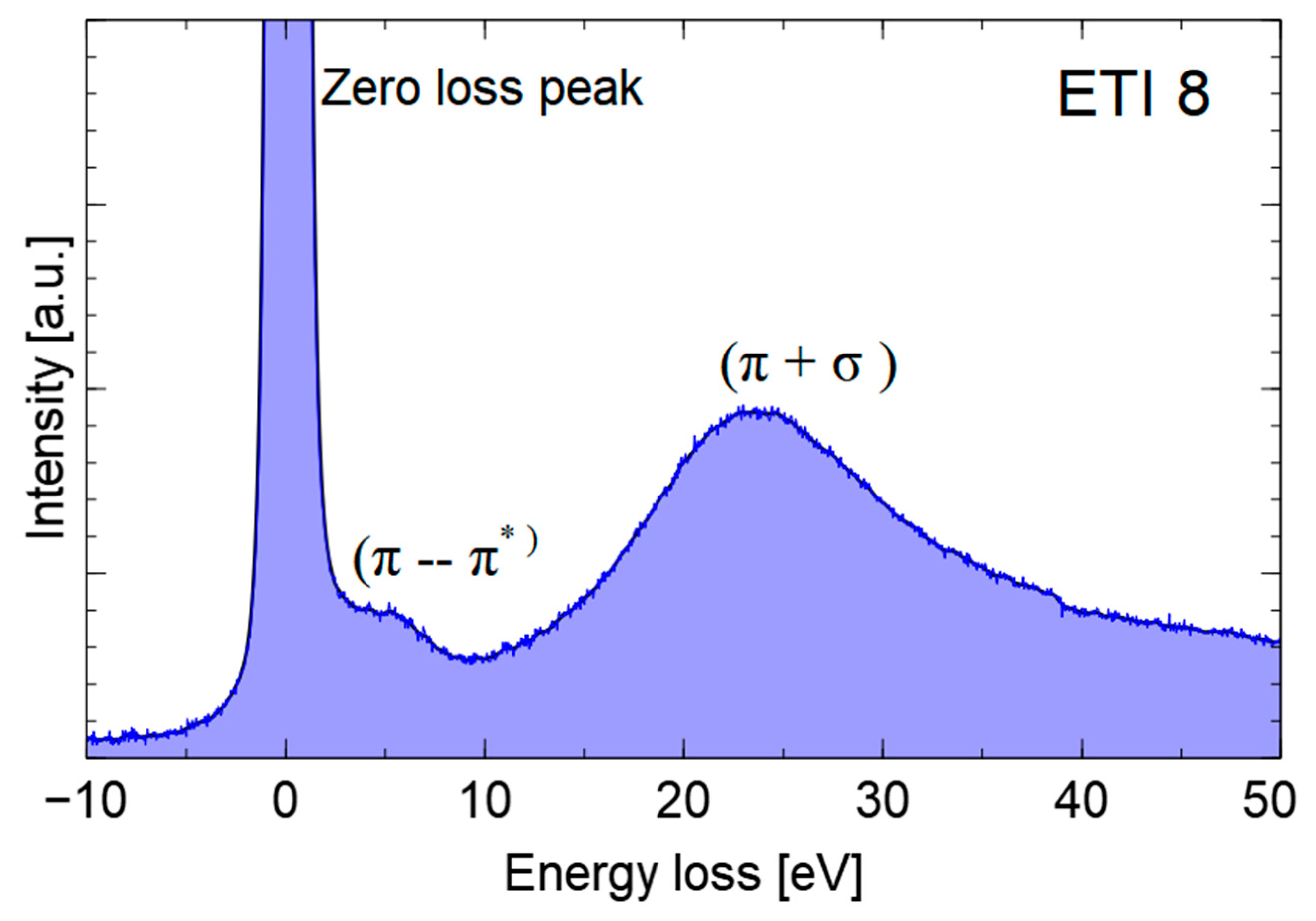